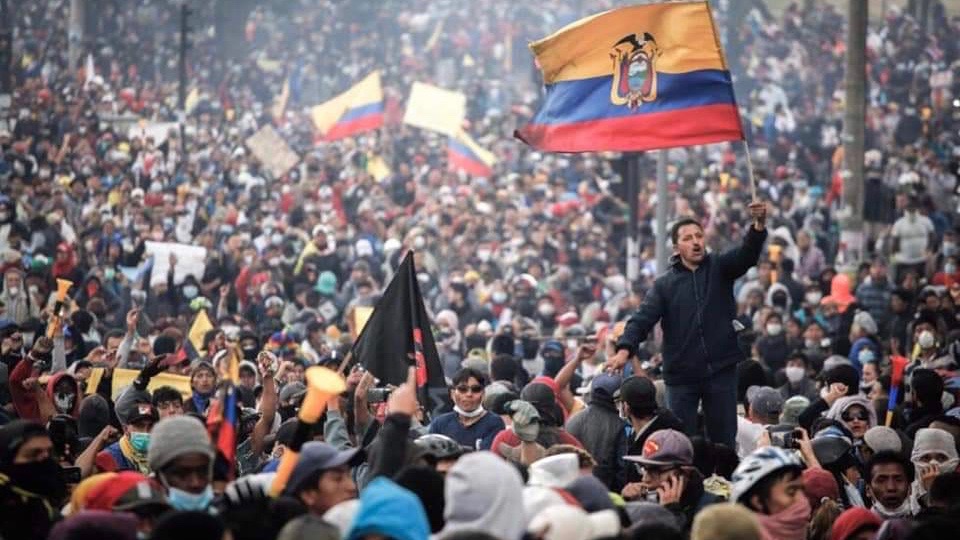 For the past 9 days, thousands of Ecuadorians have been mobilizing against the neoliberal economic measures announced by the government of Lenín Moreno.

On October 12 at 2:20pm, Ecuadorian President Lenín Moreno declared that a curfew and complete militarization of the capital city Quito would take effect at 3pm. The curfew is the latest desperate move by Moreno’s government to put an end to the massive people’s uprising against the neoliberal economic measures announced on October 1.

Moreno wrote on Twitter: “I have declared a curfew and militarization of the Metropolitan District of Quito and the valley. It will begin at 15:00. This will facilitate the acting of the Public Force against the intolerable excesses of violence.” Moreno is able to decree a curfew because he declared a state of emergency on October 3 which affords the executive branch special powers in order to maintain ‘security and order.’ However, the only thing the government has done is threaten peace and act with extreme violence against its own citizens. Videos have already circulated on social media of the entry of military vehicles to the capital.

An hour before the curfew was decreed, one of the most prominent organizations participating in the mobilizations, the Confederation of Indigenous Nationals of Ecuador (CONAIE), declared that “After a process of consultation with the communities, organizations, peoples, nationalities, and social organizations we have decided to participate in a direct dialogue with Lenín about the striking down or revision of Decree 883.” Decree 883 was announced by Moreno on October 1 and outlines the latest neoliberal economic measures in the country, including the elimination of a four decades old fuel subsidy. Many other organizations however, have declared that they will not leave the streets until the decree is completely abolished.

In response to the curfew, Ecuadorian movements and organizations have called on people to remain on the streets in defiance of the repressive measure and have called for international organizations to denounce the actions of Moreno’s government in order to prevent a human tragedy. The unprecedented levels of violent repression of protesters in the last 9 days of protests in Ecuador has caused at least eight deaths and hundreds of injured. According to the Ombudsman of Ecuador, 1,070 people have been detained.

Video shows moment in which protester was shot by Ecuadorian Public Force.

On Friday October 11, hundreds of Indigenous protesters, students, trade unionists, and citizens of Quito, mobilized towards the National Assembly in order to denounce the inaction of the government to the demands of the citizens and their violent response to protesters. Since the protests started on October 2, the National Assembly has not met to address the pressing issues. While thousands surrounded the area around the Assembly in a peaceful protest, the Police began a brutal attack. Organizations denounced that there were many children, youth, and old people present during the attack and police attempted to violently evict protesters from where many have been camping for the last week.

While most attention has been directed on the protests in Quito, people have also been mobilizing in the cities of Guayaquil, Ambato, Cuenca, among others.

As of now, thousands remain on the streets and the cries of “Out Moreno! Out!” can be heard far and wide, but Ecuadorians are gearing up for what could be one of the most brutal attacks by the repressive forces in recent history.