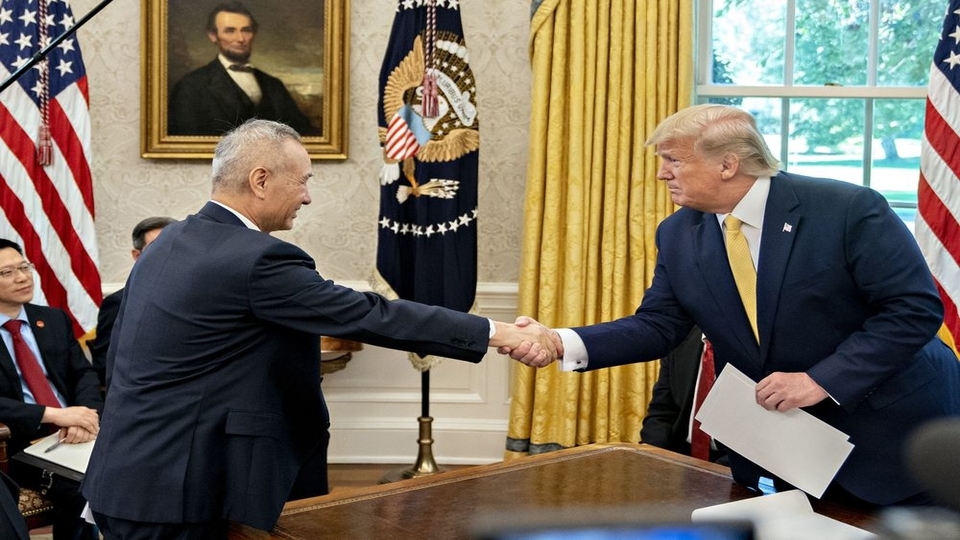 The handshake agreement on October 11 gives breathing room to both countries as negotiations continue. Photo: Bloomberg

The administration of US president Donald Trump has agreed to a compromise with the Chinese government in the ongoing trade war, claiming that it wants to keep the negotiations alive. On Friday, October 11, in what is being called the “handshake agreement”, the US agreed in principle to not implement the first major phase of exorbitant tariffs on several Chinese goods that was due to begin on Tuesday. In return, China agreed to exponentially increase its imports of US agricultural goods – which had halved over the past year – to USD 50 billion, even before the negotiations are complete.

This ‘truce’ in the prolonged trade disputes, often dubbed as a trade war, came after nearly two days of negotiations by Trump with Chinese vice-premier Liu He. The first phase of tariffs announced more than a year ago would have affected close to USD 250 billion worth of imports from China.

Earlier this year, the Trump administration had revised the tariff on these goods from 10% to 25%. Consequently by the end of May 2019, the US had imposed tariffs on USD 500 billion worth of goods out of a total of USD 539 billion of imports from China.

All of these tariffs are yet to be implemented. Nevertheless, trade relations have been greatly affected as both sides have targeted major sectors of the other through blacklisting of products and companies and other indirect means.

The two-day negotiations that ended on Friday were aimed at resuming trade negotiations. No formal agreement was signed. The compromise was announced by Trump with a public handshake with Liu.

The compromise comes after weeks of diplomatic sparring, which included the blacklisting of nearly 28 Chinese security companies and bureaus by the US, for allegedly being involved in human rights violations in the Xinjiang province.

While the two governments seem to be upbeat about the negotiations, uncertainties continue to cloud international markets, especially considering how bellicose the Trump administration has been on this matter. Also, the fact that China is yet to confirm the specifics of this truce – it has only stated that “substantial” gains have been made in the negotiations – has left many uncertain.

Some of the most pressing matters that were not addressed at the negotiations include the blacklisting of several Chinese companies, including Huawei and over 140 of its subsidiaries and affiliates, under various pretenses. These companies were given temporary trade licenses for a 90-day period, which will expire on November 19. There is also no clarity over the upcoming phase of tariffs that are set to take effect in December. China had sought a time-bound phasing out of all tariffs, which was not accepted by the US.