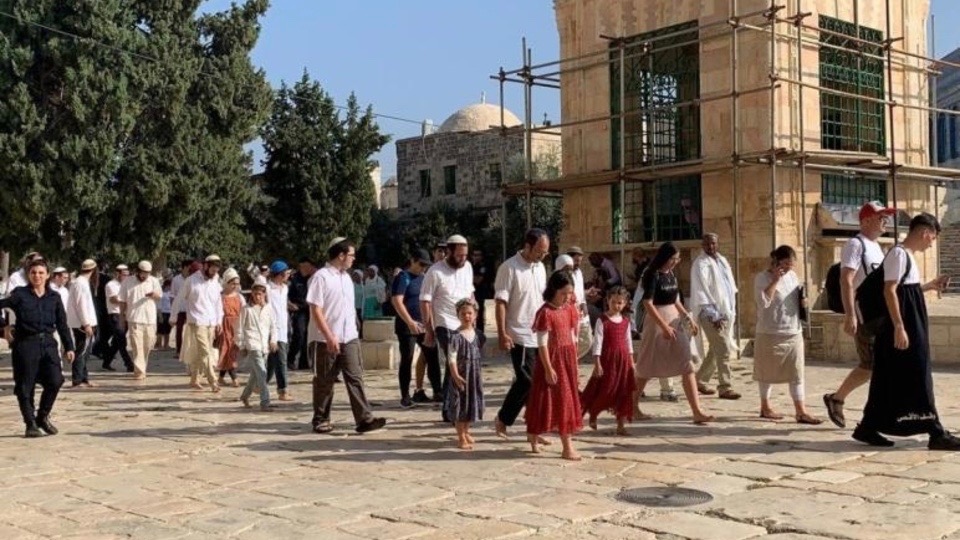 Palestinian protesters gathered in Gaza on Tuesday, October 22, to condemn the repeated incursion by extremist Jewish settlers into the Al-Aqsa mosque compound in occupied Jerusalem. From October 16-20, through the Jewish holiday of Sukkot, thousands of extremist Jewish settlers stormed the mosque compound. They disrupted the prayers of Muslim worshipers and illegally performed Jewish Talmudic rituals at the site, sparking a backlash from Palestinians.

The Al-Aqsa mosque is the third holiest site in Islam. According to Israeli law, Jews are only allowed to visit the mosque at designated hours and are not allowed to pray.

As the seven-day-long holiday ended on Sunday, around 653 settlers entered the mosque compound early in the morning with Israeli police protection, reported a source in the Jordan-run religious endowments authority which is responsible for the upkeep of the Muslim and Christian religious sites in Jerusalem. Residents stated that the Israeli police attacked some of the Palestinian worshipers who were praying near one of the compound’s gates after they were prevented from entering the compound.

However, instead of punishing or stopping the settlers, Israeli security forces have implemented strict restrictions on entry and exit to the mosque compound for Palestinian worshipers. Extensive security checks are being conducted on those Palestinians who are permitted to enter the compound.

The Union of Temple Mount, an extremist right-wing Jewish organization, which aims to build a third Jewish temple in place of the Al-Aqsa mosque, has reportedly asked its followers to storm the mosque’s compound in large numbers, especially on Jewish holidays.

There has been an increase in such incidents in recent months. They settlers disrupt prayers by Muslims and shout inflammatory slogans advocating the demolition of the Al-Aqsa mosque to build a third Jewish temple on its site. Jews believe that the site was home to two Jewish temples in ancient times, and refer to the area as the ‘temple mount’.

Earlier this month, the Al-Aqsa mosque compound was stormed during the Jewish holidays of Rosh Hashanah and Yom Kippur.  On both occasions, Israeli security forces, instead of stopping the settlers, cracked down on protesting Palestinian worshipers.