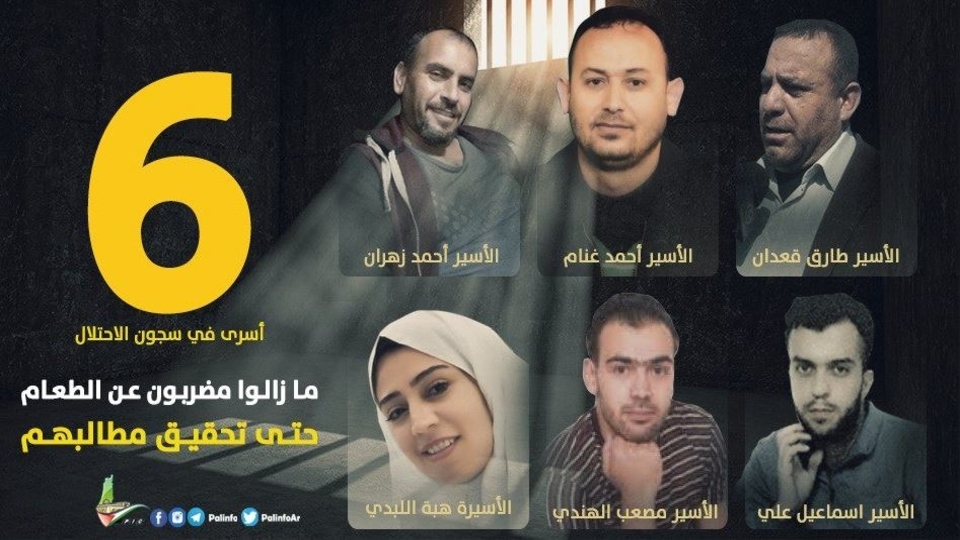 Palestinian administrative detainee Ahmed Ghannam, who was on hunger strike for the 102 days, ended his protest on October 23 after an Israeli court ordered his release following the completion of his current detention period. Five more detainees ended their hunger strikes along with him while five others are continuing their protest against their arbitrary and unlawful administrative detention without charge or trial.

Ghannam, 42, who is from the village of Dura, to the southwest of Hebron, began his hunger strike on July 14. He was arrested on June 18, following which he was placed in administrative detention in an isolation cell in the Ramleh-Nitzan detention center by the Israeli authorities under the so-called ‘secret file’. His administrative detention was renewed by an Israeli court on September 6, when he was already on the 58th day of his hunger strike.

Brutally tortured and harassed during his many interrogations while in administrative detention, Ghannam’s physical condition progressively worsened. The Israeli authorities subsequently transferred him to the Kaplan hospital in central Israel.

Ghannam suffers from leukemia (blood cancer), which requires regular medical attention. He is also immuno-deficient, which has contributed to his medical condition deteriorating rapidly. He is married with two children, but the prison authorities have denied his family permission to visit him in prison.

Ghannam  has been arrested three times and has been imprisoned in the past for his anti-occupation resistance activities. He has spent approximately nine years in jail altogether, according to his brother.

The five other detainees who are continuing their hunger strikes against their illegal administrative detention are Ismail Ali, on hunger strike for 94 days, Tareq Gaadan, (87 days), Ahmed Zahran, (34 days), Musab al-Hindi and Heba al-Labadi, (32 days). According to the prisoners’ media office, the health condition of these five detainees is worsening with every passing day.

The Palestinian administrative detainees and other prisoners in Israel have been regularly launching hunger strikes against the Israeli practice of administrative detention. They have been demanding an end to the brutal and inhumane treatment meted out to prisoners and detainees in the custody of the Israeli authorities. The hunger strikes are also launched to press for several other demands, such as the removal of mobile phone signal jamming devices and the installation of public phones.