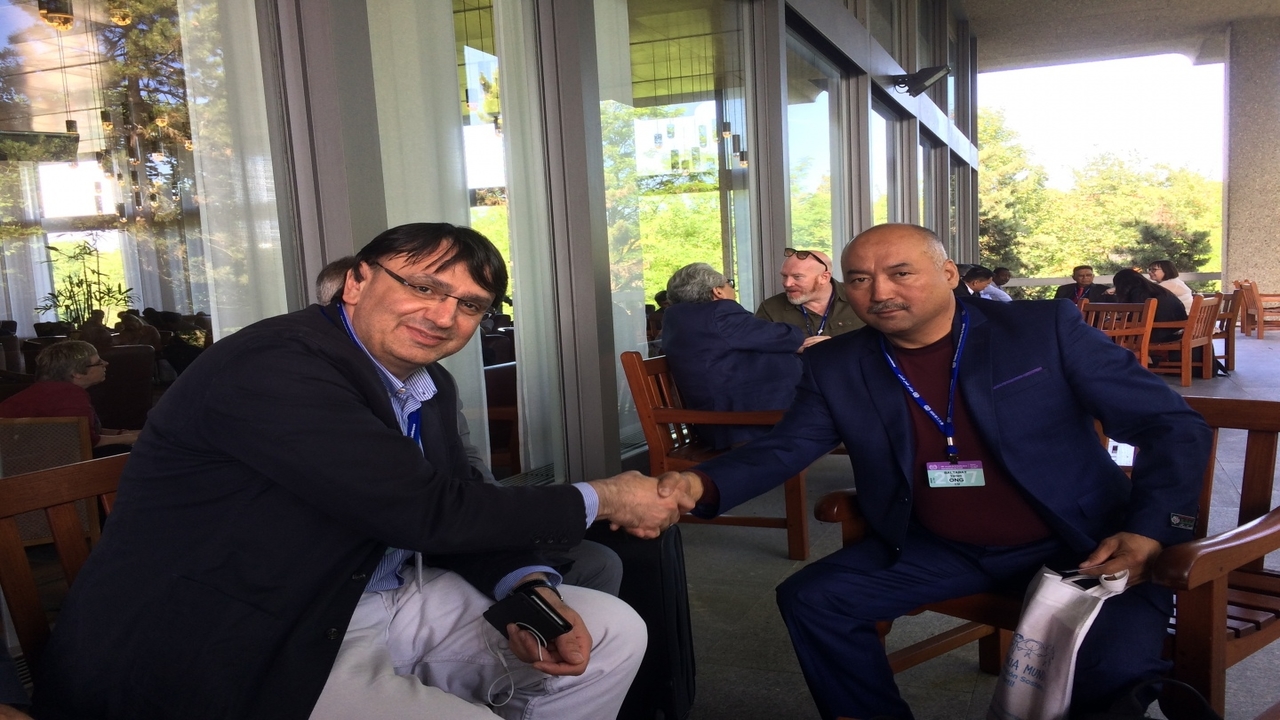 Erlan Baltabay (to the left) is a prominent Kazakh trade union leader.

Activist groups, including IndustriALL Global Union, are campaigning for the immediate release of prominent Kazakh trade union leader Erlan Baltabay, who has been sentenced to five months in prison. Baltabay, a leader of the  Independent Oil and Energy Workers Union, is also facing a seven-year jail term for his involvement in the banned Confederation of Independent Trade Unions of Kazakhstan (KNPRK).

Baltabay was released in August after an earlier arrest. However, he refused to pay the fine imposed on him or recognize the presidential pardon responsible for the release. On October 16, Baltabay was sentenced to five months and eight days in prison for failing to pay the fine.

A trade union leader from southern Kazakhstan’s Shymkent, Baltabay is also accused of the misappropriation of about USD 28,000 of union dues. However, he has consistently pointed out that he was in possession of the money following the dissolution of his petrochemical workers’ union, Decent Work, in 2015, and that his mission was to preserve the funds. However, the authorities have cited the possession of funds itself as a proof of crime.

In June, Kazakhstan was asked by the International Labor Organization to review the ongoing repression of workers and activists in the country. The Kazakh authorities have mercilessly suppressed dissent, carrying out crackdowns on independent trade unions and other organizations in the labor sector. The mass protests against the presidential elections in June were also suppressed by government forces.

The international workers’ rights body, IndustriALL, along with the International Trade Union Confederation (ITUC), have launched the  LabourStart campaign, urging Kazakh authorities to revoke all charges against Baltabay and lift the other bans imposed on him by the state establishment.

“Erlan Baltabay’s imprisonment in the first place was completely unjustified. The entire criminal process against him was a travesty of justice, and we welcomed his release under the president’s decree. We urge the authorities to release Erlan, in the spirit of the decree of the president. We also call for the withdrawal of the unjustified and politically motivated sentence that put him in prison in the first place,” general secretary of the ITUC, Sharan Burrow, said.

According to reports, Kazakhstan was put under “special scrutiny for systematic violations of the trade union and human rights,” in 2017 and 2019 by the International Labour Conference in Geneva.

The country of 18.7 million was ruled by Nursultan Nazarbayev since its formation after the collapse of the Soviet Union, until March, when he stepped down.

Earlier this year, certain legislative changes were instituted in Kazakhstan to prevent workers from forming unions and bargaining collectively for their rights. Reports also suggest that criminal sanctions have been introduced for leading or participating in ‘illegal’ strikes. The authorities led by president Kassym-Jomart Tokayev have repeatedly invoked the Trade Union Law and Labor Code to target independent trade unionists, who are facing constant harassment and surveillance and, in some cases, unjustified dismissal.