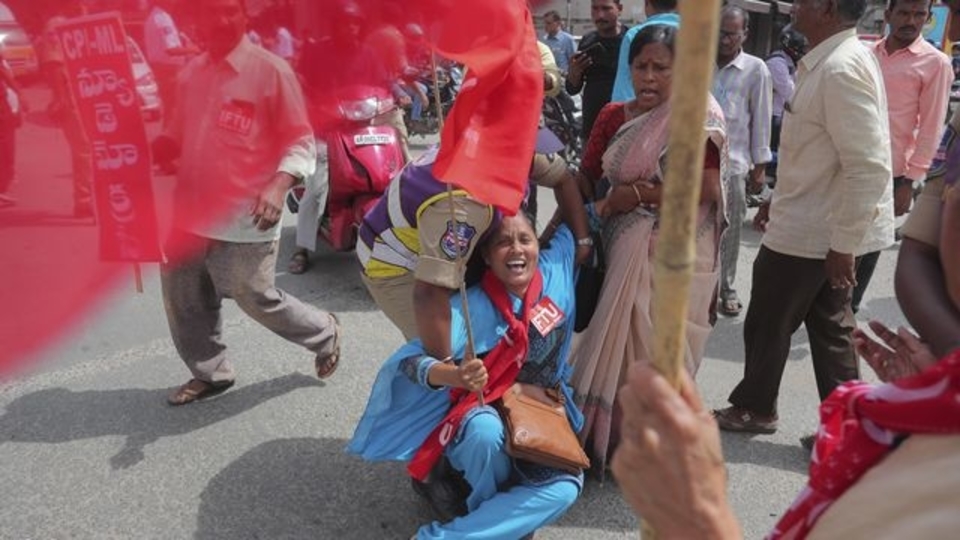 Thousands of Telangana State Road Transport Corporation drivers, bus conductors, mechanics and other workers have been on strike since October 5.

On November 8, a day ahead of the ‘long march’ organized by transport workers in the Indian state of Telangana, at least 5,000 protesting workers were taken into preventive custody by the police. The move was an attempt to prevent the workers, part of an ongoing three-week long protest against the state government, from assembling in the capital city of Hyderabad to participate in the “Chalo Tank Bunk” demonstration on November 9.

Led by the TSRTC Joint Action Committee, a trade union of the Telangana State Road Transport Corporation (TSRTC), thousands of TSRTC drivers, bus conductors, mechanics and other workers have been on strike since October 5, seeking “job security” and substantial improvements to their “wages and working conditions.” Regarding this, the workers have proposed a list of 26 demands, however, the central issue remains opposition to the state government’s efforts to privatize the TSRTC.

Workers have been protesting in defiance of the state chief minister K. Chandrasekar Rao’s second deadline ordering them to return to work. He had issued a statement, giving an ultimatum to the workers – either to return to work by November 5, or lose their job. Workers, however, remained firm in their dissent, with only 350 of the 49,000 TSRTC workers turning up for work on November 5.

Meanwhile, massive round ups and raids were conducted by the police to prevent a large-scale demonstration from taking place in Hyderabad on November 9. Several of the movement leaders were also detained by the state authorities. As per the police the workers were detained as a “preventive measure” to avoid “law and order issues.”

Those who tried to reach the spot of the demonstration on November 9 were also denied permission to assemble peacefully. The police resorted to the use of heavy force, armed with batons and tear gas canisters, against the protesting workers. Many were seriously injured and some even collapsed under the blows. According to reports, 23 people have lost their lives since the strike began in October. In some cases family members of workers have also died.

The ongoing strike has received solidarity and support from several “student groups, teachers, other government employees, civil society groups and political parties,” according to Ashwathama Reddy of the TSRTC Joint Action Committee

The vast majority of Telangana’s population depends on the state road transport company for affordable commute. The workers have thus demanded that instead of privatization, the TSRTC be merged directly into the state government. As per local reports, the TSRTC has been starved of state funds for maintenance and modernization for the past several years, which has plunged it into a cycle of loss and debt.