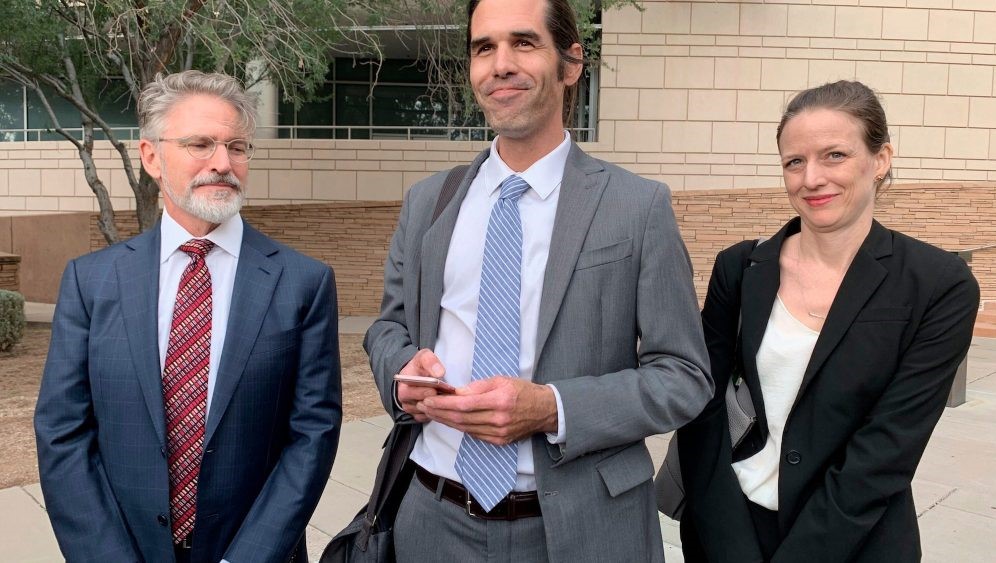 Scott Warren, center, with his attorneys Amy Knight (right) and Greg Kuykendall (left) outside the federal courthouse in Tucson after his acquittal. (Photo: Astrid Galvan/AP)

Warren, who works with the humanitarian aid group, No More Deaths, was arrested in January 2018, for letting two ailing undocumented immigrants take shelter at a building used by the group. The building, referred to as “The Barn” throughout the case, was used as a storage space for supplies and a staging point for aid distribution.

The case caught national attention as the charges framed by federal prosecutors wanted to criminalize the very act of aid-giving. Accordingly, Warren was sought to be held guilty of federal crimes for offering shelter to two severely dehydrated and fatigued men who had to cross the perilous US-Mexico border in Arizona, where temperatures can soar up to 50 degree Celsius.

As the case effectively sought to define what counts as a humanitarian act, a conviction would have had far-reaching implications to all humanitarian aid workers in the United States.

Several groups like No More Deaths have sprung up across the US-Mexico border which traverses across some very difficult terrain and harsh climate. Dozens of asylum seekers from Central America are reported to die trying to undertake an arduous journey across deserts and marshes. Humanitarian groups try to help those crossing such hostile geographies survive, by putting up supplies and other essential resources in strategic locations throughout the desert.

The Border Patrol have been at loggerheads with humanitarian workers, especially under the administration of President Donald Trump and his new belligerent immigration policy. While humanitarian volunteers have been prosecuted in the past over frivolous charges like littering and vandalism for leaving water dispensers and other supplies in the desert, Warren was charged with federal crimes of apparently facilitating illegal immigration, that could have put him in nearly 20 years in prison.

Federal prosecutors only filed charges against him nearly a year and a half after his first arrest, almost immediately after No More Deaths posted a video of the Border Patrol destroying supplies that aid workers would leave behind for asylum seekers. The first attempt at prosecuting him ended in a mistrial as the jury could not arrive at a unanimous verdict on Warren. The second trial however had a unanimous verdict that deemed Warren not guilty of the charges against him.

“The government failed in its attempt to criminalize basic human kindness”, Warren said talking to the press outside the court.