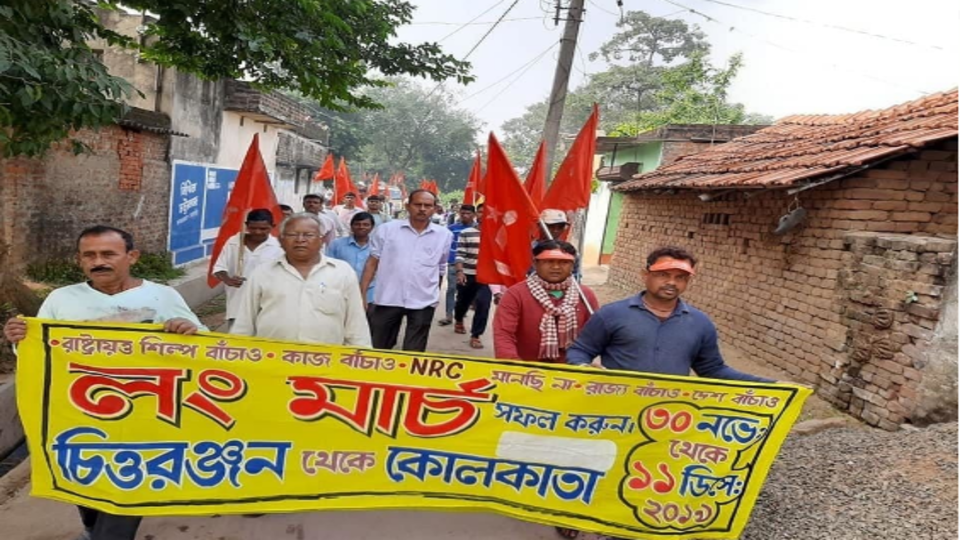 The Indian state of West Bengal is gearing up for a long march by workers, called by the Centre of Indian Trade Unions (CITU) with the slogan “Save Public Sector”, against the government’s ongoing spree of selling and privatizing public sector undertakings (PSU). The 283-km long march will begin on November 30 from Chittaranjan Locomotive Factory in Paschim Bardhaman district and will culminate at a public meeting in the state capital Kolkata on December 11.  The long march is also in protest against the implementation of the National Registry of Citizens (NRC) across the country, as proposed by the far right Bharatiya Janata Party-led government at the center.

Talking to NewsClick, Anadi Sahoo, Secretary of CITU West Bengal, said, “The BJP government at the Center is trying to sell all public sector undertakings. 56 PSUs in our state have been closed down and sold already. In a similar manner, the state government has closed down several PSUs and merged some with others. If this keeps going on, lakhs of people will lose their jobs in the near future. Neither the central government nor the West Bengal state government have paid any heed to one burning question—what will happen to these workers who are losing their jobs because of privatization?”

He further added, “This march is being organised against the anti-people, anti-worker economic policies of the central government. Thousands of people will march 283 km with these demands. We are also demanding that the government ensure that the farmers receive minimum selling price (MSP) for all their produces. The march will go on for 12 days. More marches will start from other industrial zones across the state, and people will come out on the streets to make sure that the government cannot continue to ignore our demands anymore.” Preparations for the long march are already in full swing across the state, with conventions and public meetings being organized in large numbers across all districts. More than a hundred rallies have already taken place in support of the workers’ march. Meetings are also being organized at factory gates.

Talking to NewsClick, Gargi Chatterji, district secretary of North 24 Parganas CITU, said, “Students, youths, women, farmers, and agricultural workers have all expressed their solidarity with us and will participate in the long-march. We have seen huge participation in rallies and meetings that have been organised in the days leading up to the commencement of the march.”

“We are expecting that more than one lakh people will attend the public meeting in Kolkata on December 11,” she further added. She also noted that along with the march, workers have also started preparations for the all-India strike called on January 8.

According to Sahoo, “More than 30,000 posters have been printed to spread the word about the long-march, 2 lakh leaflets have been distributed in homes across the states. Social media is also being used to ensure maximum participation in this rally. Workers from industrial zones that do not fall on the route of the long march will also take out rallies, which will also culminate in Kolkata on December 11.”

He added that in North Bengal, another long march will start from December 1, which will culminate in a huge convention in Siliguri on December 10, a day before the public meeting in Kolkata. “Narendra Modi has destroyed the backbone of the Indian economy, and made policies for the benefit of the capitalists, without caring about how it would affect the workers across the country. Thousands of people will walk hundreds of kilometers, determined to make Narendra Modi change his policies. The people will raise their voices and tell the Modi government and the TMC government in the state that it’s high time they start caring about the workers,” the leader asserted.