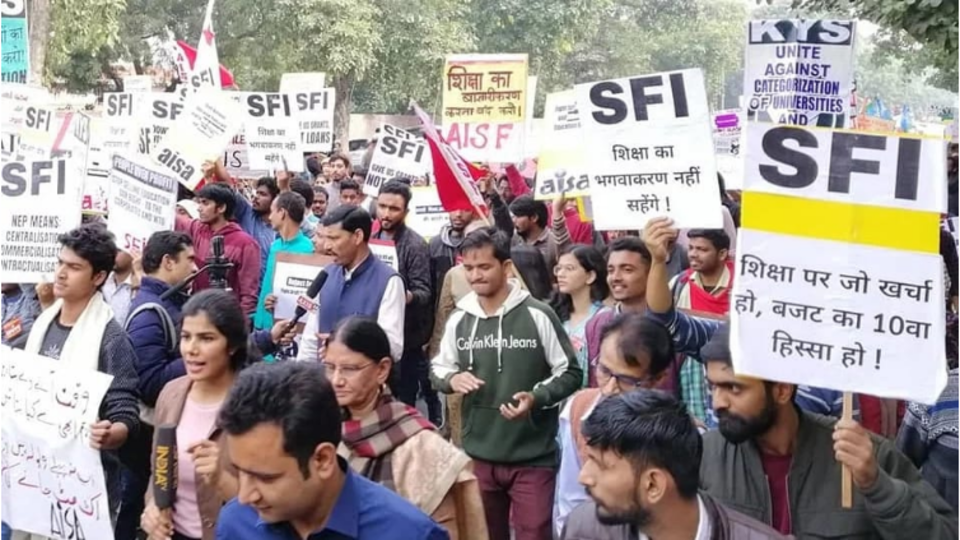 The students of Delhi’s Jawaharlal Nehru University took to the streets in November with slogans such as “No to Fee Hike”, “Education not for sale” and “#FeesMustFall”, a hashtag which also ended up trending on India’s social media sites.

#FeesMustFall is a movement which did not originate at JNU. It started in the classrooms of South Africa and has since spread to global campuses.

#FeesMustFall was a national student-led protest which began in October 2015, when the University of Witwatersrand in South Africa announced increase of fees by 10%. In September 2016, the minister of higher education announced that the country’s universities were facing critical funding challenges and to meet them universities could set their own fee hikes beginning 2016.

More recently, a small protest in mid-October this year by dozens of college students jumping subway turnstiles over a hike in transit fares quickly exploded into a full-bore uprising in Chile that has become the most significant chapter in the nation’s history since it emerged from dictatorship in 1988. From Santiago to other cities and towns such as Concepción and Valparaiso, anger over long-festering economic inequality issues, low wages, and a rising cost of living have Chileans pouring into the streets in protest.

Critics trace these protests to the 2011 student protests which began at the Central University of Chile, where students took to the streets to protest the gross unfairness of the education system; with one of world’s lowest levels of public funding for higher education and no comprehensive system of student grants or subsidized loans. The Chilean students protested against accessibility and privatization of education.

This month, students in France took to the street after one of them set himself on fire and left a note to highlight his poverty. The undergraduate, named only as Anas K in the media, wrote a Facebook post before his attempted suicide protesting the education policies of president Emmanuel Macron and the poverty in which he found himself. Following his self-immolation, students protested in Paris and Lyons over the fact that more than 20% of French students now live in chronic poverty of the kind that Anas K had described.

At the heart of the #FeesMustFall protests is one global problem: the cost of higher education.

In the United States, many students graduate with huge student loan debts that saddle them with burdensome repayment terms. The issue has become a factor in the United States presidential election next year with two democratic candidates, Elizabeth Warren and Bernie Sanders proposing ideas for free public education. Young Americans with some college education or college degrees are delaying home ownership, marriage, and child-bearing in part because they are leaving college burdened by crushing debt and finding good-paying jobs scarce.

On the other end is a growing belief and a global narrative that higher education ought to be a right, especially since more and more students face post-university unemployment, underemployment and loan default.

The emergence of such a rights-based narrative, writes well known sociologist and educator Jonathan Kozol, is because of the alarming growth in global inequality. India, South Africa and Chile are also extremely unequal societies where the difference between the rich and poor is widening each year.

For instance, India is home to the largest number of billionaires outside the United States, China, and Germany. According to Oxfam, it is also home to the largest number of poor, malnourished, child laborers, of people without access to safe drinking water, and of illiterates. India is dead last on international environment and global hunger indices. Similarly South Africa, according to the latest data from the World Bank, is the most unequal society in the world in terms of income distribution and access to essential public services such as housing and health care.

While in South Africa the government has struggled to fulfill promises of affordable higher education which it has made on paper, India and Chile have had right-wing governments who have moved away from public funding of higher education altogether and towards corporatization and privatization of universities.

Prime Minister Narendra Modi’s reelection platform did not make any references to the cost of higher education or rising inequality in India. President Sebastian Pinera of Chile has been accused of using brute police force to outright suppress any protests.

If one were to look at Indian social media sites (and among some mainstream media), the backlash against JNU students has been vociferous. Critics claim that most JNU students were from upper middle class families and were “freeloaders”, “parasites” and a burden on taxpayers since they receive a “free education”. There are memes circulating calling them “pseudo intellectuals” merely trying to maintain their privileged status.

The reality, as BBC reported, is far more nuanced. While some JNU students come from upper middle class families who could afford the 150% fee hike, 42% of student’s family incomes fall below or far below an annual household income of Rs 144,000 which would, if these hikes are implemented, force those students to drop out.

The #FeesMustFall movement is much larger than the Rs 2,000 monthly fee that has sparked the recent protests. Chilean, South African and Indian students have been seen carrying the most telling sign for this movement and moment, “This education policy is anti poor.” While it germinated from fee hikes, these protests are really about the precipitous rise of inequality and cost of education which are leaving poor students behind.

Shakuntala Rao teaches at the Department of Communication Studies, State University of New York, Plattsburgh. The views are personal.