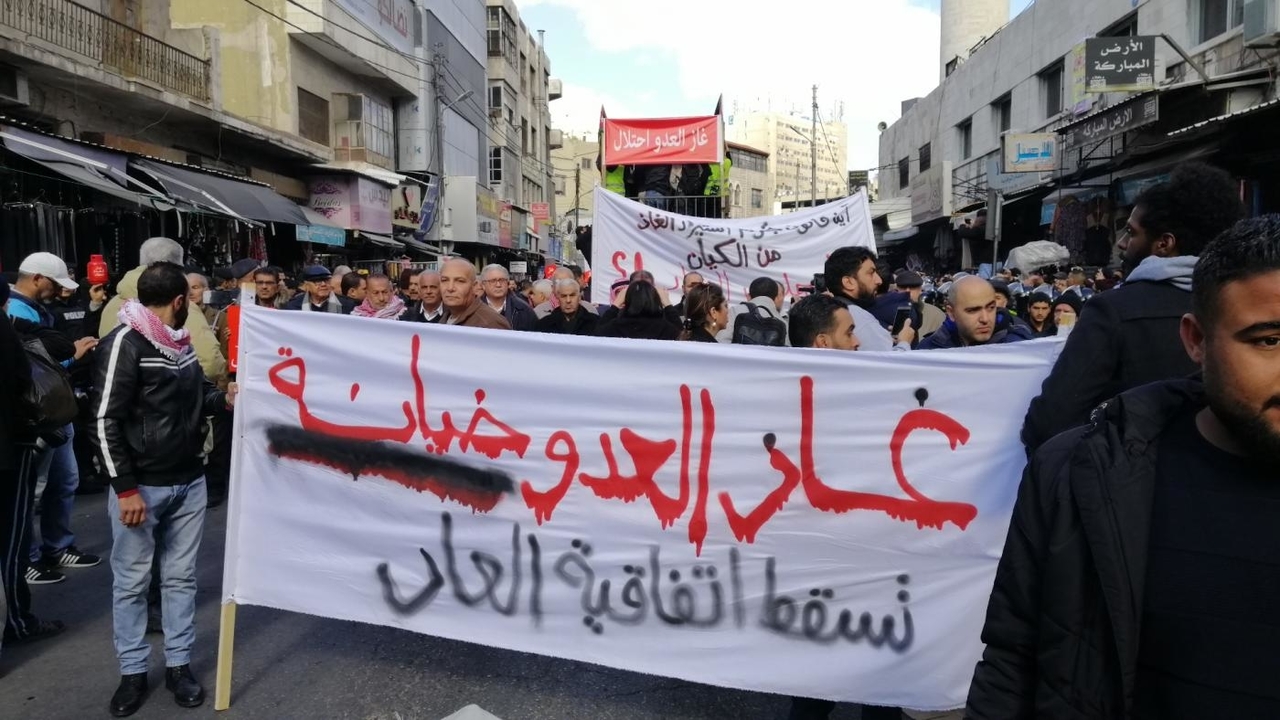 Hundreds of Jordanians converged in the centre of Amman on Friday, January 3, to demonstrate against an energy deal that brings Israeli gas into Jordan. (Photo: MEE/Mohammad Ersan)

Jordan witnessed large-scale protests on Friday, January 3, against the import of gas from Israel’s Leviathan gas field on an experimental basis. Jordan received the first shipment of Israeli gas last week, as per an agreement signed between the two countries on the import of gas in 2016. Protesting Jordanians demanded the cancellation of the agreement, claiming that it leads to the “normalization” of the Jewish state, and is a betrayal of the Palestinian people.

Protesters began their march from the front of the Grand Husseini mosque in the central part of the Jordanian capital city of Amman, and walked till the nearby Nakheel square. Displaying their anger and staunch opposition to the gas supply agreement with Israel, people carried banners and chanted slogans saying “the gas agreement is occupation”, “the enemy’s gas is occupation”, “we will not normalize, we will not be subjugated… the people of Jordan are not for sale”, “down with all projects to suppress the Palestinian cause,” and the like.

Two days earlier, on Wednesday, January 1, Israel and Jordan had announced the start of the experimental gas pumping, in accordance with the agreement of 2016. As per the agreement, the Texas-based Noble energy group began pumping gas from Israel’s Leviathan gas field, to be imported by Jordan on an experimental basis for a three-month period. The overall cost to Jordan is estimated to be around USD 10 billion as per the agreement, out of which USD 8 billion will go to Israel in exchange for supplying Jordan with approximately 300 million cubic metres of gas daily, for a period of 15 years. The Jordanian government claims that with this agreement, Jordan is poised to save at least USD 500 million annually through the stabilization of energy prices, and by obtaining gas from a geographically closer Israel rather than from other, farther international suppliers. It has been claimed that the 2016 agreement between the Jordanian government and Israel will also benefit Jordan’s National Electricity Company (NEPCO).

However, the agreement has been heavily opposed by various sections in Jordan. Last month, 58 of the total 130 Jordanian MPs signed a memorandum requesting for the urgent formulation of a draft to scrap the gas agreement with Israel. In March last year as well, the Jordanian parliament had unanimously rejected the gas agreement. However, Jordan’s constitutional court intervened and ruled that the agreement did not require the approval of the national assembly since it had been technically signed between two companies and not two governments.

Responding to the news of the Jordan-Israel gas agreement going into effect, the Jordanian Communist Party stated that as the agreement had already been rejected by the parliament and the people of the country, the import of gas from Israel marked a black spot in the country’s history, in its pursuit of normalizing relations with Israel. The party in its statement also said that it strongly condemns the Jordanian government’s decision to implement this agreement against the will of the Jordanian people and in violation of Jordan’s sovereignty, and by infringing upon the powers of the country’s constitutional institutions. It called upon the government to reject this agreement, which provides huge financial resources to Israel at the expense of Jordanian taxpayers.