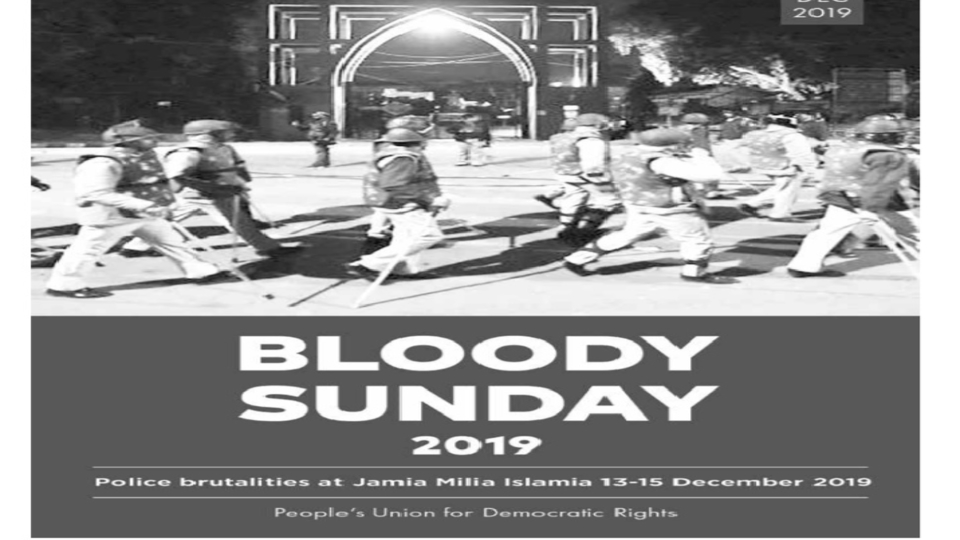 Even as the Delhi police stood by and allowed right-wing goons to brutally attack students of New Delhi’s Jawaharlal Nehru University, a report has revealed the extent of police brutality on students in Jamia Millia Islamia university campus on December 15, 2019. The police brutality against the students of the university was a major spark for country-wide protests that are continuing.

The fact-finding report titled “Bloody Sunday: Police Brutalities at Jamia Millia Islamia between 13-15,” was compiled by a six-member team from the People’s Union for Democratic Rights. It states that the police assault on students was intentionally “aimed at causing maximum injuries to the protesters” who were protesting peacefully outside the university’s gate 7. The report also stated that “the police force caused wanton damage to vehicles parked nearby, and reportedly detained around 50 students”.

“Tum mulle ho, katwa ho, tumhein chodenge, tumhare 7 pushton ko chodhenge (You are Muslim, you are circumcized, we will f*** y*** and your seven generations),” was typical of the Islamophobic slurs and obscene remarks made by the Delhi police after barging inside the Jamia Millia Islamia university campus in South Delhi on December 15, following protests against the divisive Citizenship Amendment Act enacted by the Indian government led by Narendra Modi. The police, which is under the direct control of Central home ministry, proceeded to break locks, smash windows and furniture of the university, fired several rounds of tear-gas canisters, and physically assaulted students irrespective of gender.

The report constructs the sequence of events that occurred around the university between December 13  and December 15, providing details regarding the manner in which the police entered the campus without the prior notification, and began the crackdown against students who were planning a march to the parliament to protest against the Citizenship Amendment Act and the nationwide National Register of Citizens. As barricades were installed by the police to prevent the students from carrying out their long march, some of the students tried to break through them. This led to a confrontation, providing an opportunity to the police to hurl tear gas shells indiscriminately at the crowd and resort to a brutal baton charge, culminating in an atmosphere of intense fear, chaos and terror.

Based on the testimonies of the injured students and eye-witnesses, including the teaching and non-teaching staff, doctors, parents and others present on the premises, the 17-page report found no evidence of any attempt by the police to make announcements asking the protesters to halt or to retreat: “Use of baton-charge and tear gas was unrelenting and cruel, continuing well after the crowds had already started to disperse. Protesters who were retreating were attacked and those who were injured were subject to further assault. The use of firearms with live rounds by the police is without authorization and without the necessary safeguards,” the report said. It concluded: “The destruction of CCTV cameras by the police force at the gate, inside the campus, and at the library and reading rooms is clear evidence of the intention of the police force to indulge in actions that are prohibited and amount to criminal offenses.”

“People were attacked with batons specifically on the head, face and on the anterior side of the legs. The force used was sufficient to cause deep gashes and bone fractures, and the nature of injuries make clear that they were intended to cause maximal damage. Thus, incapacitated students were further maltreated by leading to additional injuries. This onslaught appears to have been orchestrated to only terrorize the university and neighboring areas,” the report concludes.