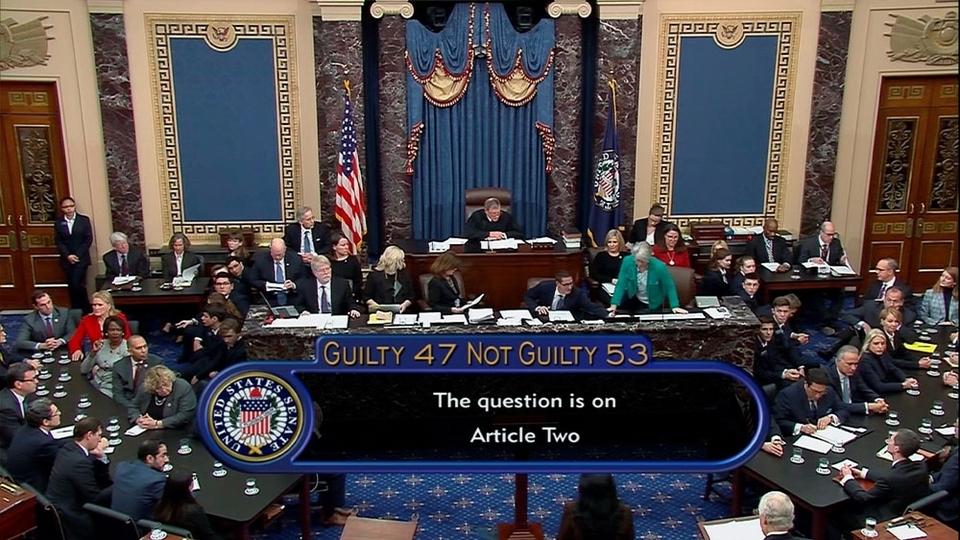 On February 5, Wednesday, president Donald Trump was formally acquitted in the impeachment trial with the majority in the US Senate voting “not guilty” on the two charges leveled against him. This brings to an end the long impeachment process against Trump started by the Democrats last year.

One Republican Senator, Mitt Romney, voted with the Democrats when charges of abuse of power were placed. However, Trump easily survived the conviction with 52 senators opposing it and only 48 supporting. For any conviction in an impeachment process in the Senate, a two third majority is required. On the charge of obstruction of the Congress investigation, only 47 senators voted in favor and 53 opposed it.

The final acquittal of Trump from all the charges was passed by a vote of 53 in favor and 47 against, strictly on party lines. The Democrats have 45 seats in the Senate. Two independents usually vote with them.

The impeachment process against Trump was initiated last year when it was revealed that he had called the newly elected president of Ukraine Volodymyr Zelensky in July, asking him to initiate an inquiry against former vice-president Joe Biden and his son in exchange for the release of $400 million aid. Joe Biden is a leading Democratic candidate against Trump in the upcoming presidential elections. This became the basis of the charge of the misuse of power .

Trump refused to cooperate with the investigation which led to the second charge of obstruction. Trump has consistently denied the charges against him, calling the impeachment process a “hoax”.

Trump is only the third US president to face an impeachment trial in the history of the country. The impeachment was successful in the House of Representatives in December last year where Democrats have a comfortable majority.

Several Republicans, who opposed the impeachment motion in the Senate, nevertheless came out in open and criticized Donald Trump for his “shameful conduct” in the process. They said that they thought the charges were true but not serious enough for his impeachment.

The final result was a foregone conclusion particularly after the Senate voted with a narrow margin of 51-49 last week to block witnesses and new evidence after former national security advisor John Bolton accused Trump of wrongdoing.