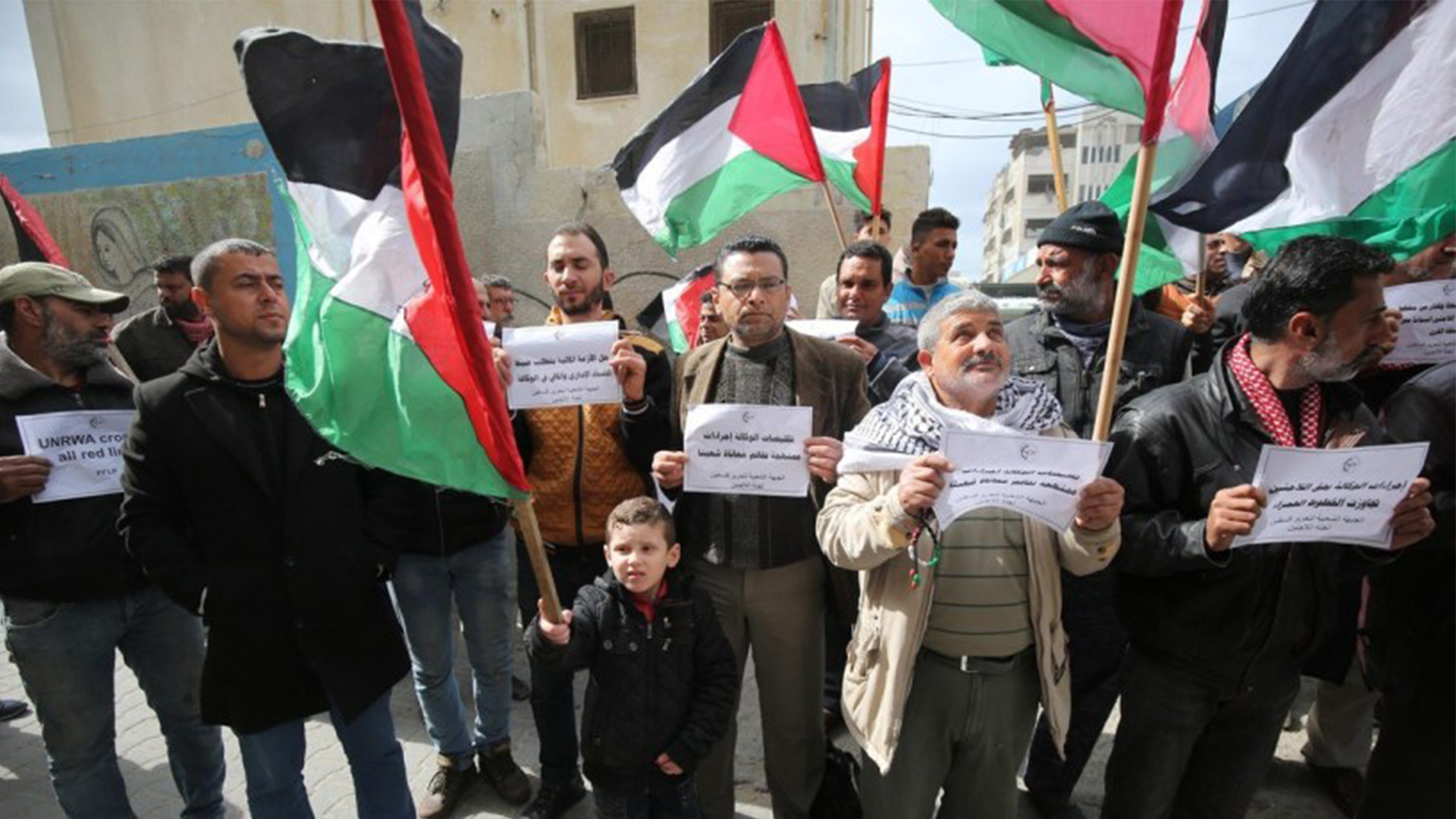 Palestinians living in the blockaded Gaza strip staged a demonstration on March 1, Sunday, protesting an announcement by the United Nations Relief and Works Agency for Palestine Refugees in the Near East (UNRWA) to stop certain services and operations in the occupied West Bank and Gaza due to a lack of resources. A report released on February 28 claimed that the UNRWA is facing an “unprecedented financial crisis”. UNRWA spokesperson Adnan Abu Hasna confirmed that the severe lack of funding will impact many of the agency’s programs and operations in the fields of education, healthcare and food assistance.

According to Hasna, only USD 125 million of the total committed donations of USD 299 million from the international community have been received by the agency. This amount is only a small fraction of the agency’s total budget of USD 1.4 billion for the year 2020. He added that the UNRWA is also facing a shortage of funds to carry out any of its emergency programs in the occupied Palestinian territories.

On Sunday, protesters expressed their opposition and anger towards US efforts to reduce aid to the agency, as well as the attempts to do away with the right of return of Palestinian refugees. Palestinian flags and posters and banners with slogans in Arabic and English were displayed at the protests. People accused the UNRWA of having crossed all red lines and of “doing Trump’s bidding”. They also criticized “the punitive measures against Palestinian refugees in the refugee camps”, calling this a deliberately political move – not due to a budget deficit or financial urgency.

Christian Saunders, the interim commissioner of the UNRWA, called upon the international community to provide the agency with a minimum of USD 1.4 billion so that it may be able to continue to finance humanitarian assistance to the more than five million Palestinian refugees in West Asia. He added that USD 806 million of this amount will be used to fund services and operations in the sectors of primary education, health, refugee camps, relief and protection services, among others. The requested funds will also sponsor the education of over half a million Palestinian children in 700 schools run by the agency, as well as cover medical care for about 8,500,000 Palestinians. An additional USD 155 million is required as emergency aid to the occupied West Bank, including East Jerusalem and the Gaza strip. USD 270 million is needed to support Palestinian refugees in Syria, Lebanon and Jordan. The United Nations General Assembly recently voted in favor of extending the mandate of the UNRWA until June 2023.

Journalist and author Ramona Wadi was quoted by the Palestine Chronicle as saying: “funding UNRWA is just the first step. If the international community was serious about upholding human rights, it would emphasize the importance of funding for humanitarian endeavors alongside the Palestinian political struggle, which is intentionally thwarted partly through the discrepancy between financial aid and human rights violations. The international community has failed generations of Palestinians.”

She also pointed to the apathy and lack of support and solidarity from the international community towards the Palestinian cause and struggle for freedom, self determination and basic human rights. She accused the international community of largely ignoring the abhorrent war crimes and human rights violations committed against the Palestinian people under Israeli occupation.