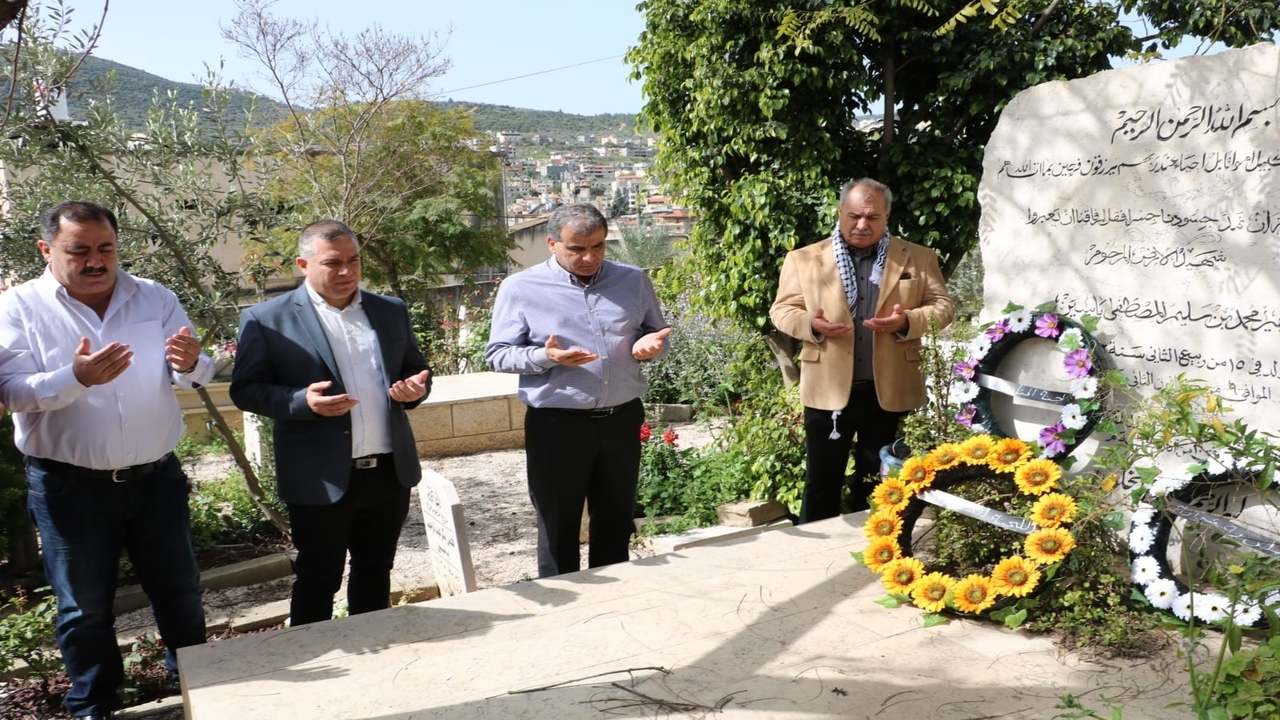 Homage is paid to the six Palestinians killed by Israeli forces on 30 March, 1976 (Photo: Arab48)

On March 30, Monday, Palestinians marked the 44th Land Day, as well as the 2nd anniversary of the Great March of Return protests. However, due to the ongoing COVID-19 pandemic, no mass rallies or demonstrations were organized.

Instead, activists and Palestine solidarity organizations announced an ‘online rally’ and a ‘Twitterstorm’ to mark the anniversaries and to highlight the suffering and struggles of Palestinians, especially in Gaza, where residents have been living under a crushing Israeli-Egyptian land, air and sea blockade for the past 14 years.

Palestinians in the occupied West Bank, occupied East Jerusalem and in the Gaza strip, as well as Palestinian diaspora across the world, took to raising the Palestinian flag on rooftops and balconies. Authorities in the Hamas-administered Gaza strip had also issued an advisory to its residents to stay at home and not venture out to the sites of the Great March of Return protests. Many Palestinians and international solidarity activists posted photos of themselves with the Palestinian flag and photos and names of the Palestinians killed during the Great March of Return protests since March 2018. People also posted video messages of solidarity, singing songs and reading poetry. Gaza’s authorities had also planned to play sirens across the territory to mark the occasion, with traffic stopped for one hour.

Palestinians commemorate Land Day to mark the events of March 30, 1976, when Israeli police shot and killed six people who were protesting and resisting the Israeli confiscation of Palestinian land. The Israeli government had announced its intention to seize 21,000 dunums (approximately 5190 acres) of Palestinian land in the upper Galilee region in order to build illegal Jewish settlements. To oppose this decision, Palestinians living inside the state of Israel in mostly Arab majority towns had gone on a general strike. The Israeli police and security forces subsequently attacked the protesters, seriously wounding and arresting many Palestinians.

In 2018, Palestinians in Gaza launched the Great March of Return protests on the border with Israel to demand an end to the Israeli-Egyptian blockade and the right of return of Palestinian refugees. The protests were held weekly on Fridays until recently. The Israeli army and security forces routinely cracked down on the protesters, killing close to 300 people and injuring approximately 25,000, using rubber-coated metal bullets, tear gas canisters and even live ammunition. In the last few months preceding the COVID-19 outbreak, the protests had shrunk in size due to the high number of injuries and casualties inflicted by the Israeli forces and the intermittent ceasefires between the Palestinian resistance group Hamas and Israel.