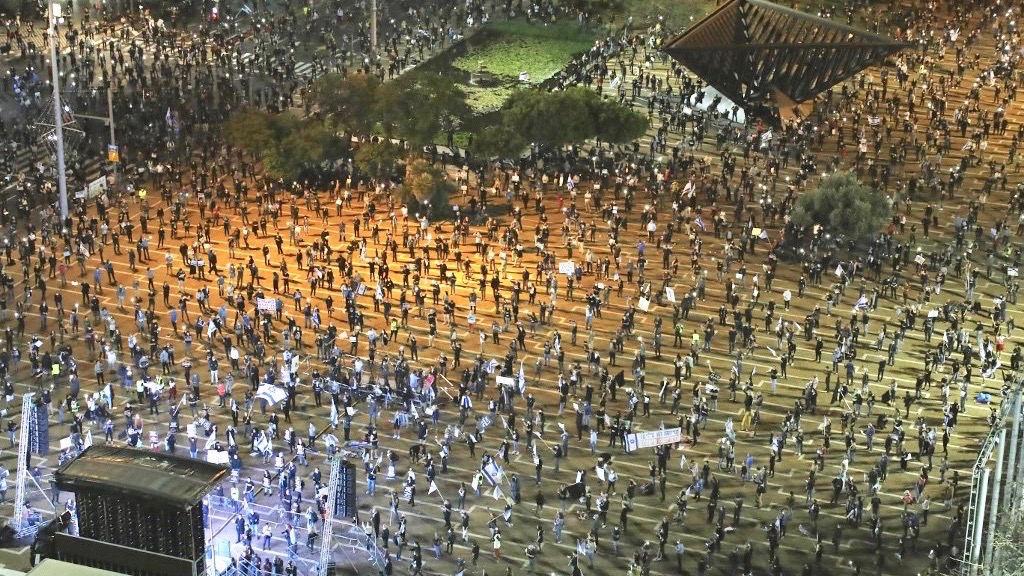 Israelis, keeping safe distance from one another, take part in 'Black Flag' demonstration on Sunday in Tel Aviv (Photo: AFP)

Scores of Israeli citizens gathered at Rabin Square in Tel Aviv on April 19, Sunday, to participate in a ‘Black Flag’ protest against prime minister Benjamin Netanyahu’s measures in the wake of the COVID-19 pandemic. Protesters claim these measures are anti-democratic  and violate privacy. Protesters also opposed Netanyahu’s continuing as prime minister. Negotiations between Netanyahu’s Likud party and the main opposition – Benny Gantz’s Blue and White Alliance – reached a stalemate after no final decision could be reached regarding a potential power-sharing deal between the two.

Protesters on Sunday wore black clothes and protective face masks, waving black flags along with the Israeli flag. Many were seen carrying banners and placards reading slogans like “Let Democracy Win”,  “Save The Democracy” and “Crime Minister” – referring to Netanyahu, who has been indicted in several corruption cases in which he could soon face trial.

Protesters were required to maintain social distancing norms and stood two meters apart, as well as keeping a distance of 10 meters between each group of 10 protesters. The organizers had marked spots where the protesters could stand and speakers made announcements reminding them to exercise safety and maintain distance from each other.

Over 5,000 Israelis participated in the protests on Sunday, as per the organizers. Thousands more took part in virtual protests on Facebook Live and Zoom. A large contingent of the Israeli police force was also present at the site to keep an eye on the protesters.

The Black Flag movement protests first began in Israel in March in response to the government’s anti-democratic coronavirus-related policies, which included authorizing Israeli security and intelligence agencies to track mobile phones of citizens. A huge motorcade of cars had proceeded towards Jerusalem to protest these measures installed under the cover of fighting COVID-19.

Israel has so far reported approximately 13,000 cases of COVID-19 with 172 deaths. Due to the lockdown, Israelis are forced to stay indoors and all shops and commercial businesses have been closed, leading to massive financial losses and a rising unemployment rate – almost 26%. The interim caretaker Israeli cabinet on Sunday approved the decision to reopen some shops, schools for children with special needs, and allow small prayer meetings.

Israel has been mired in political turmoil for the last one year due to three inconclusive elections in the span of 12 months. Following the most recent general election in which neither caretaker prime minister Netanyahu nor his former army chief and current main opposition rival Benny Gantz secured a majority, talks form a unity government were started between the two.

However, the talks failed to yield any fruitful results, and the duo missed last Thursday’s deadline to form a coalition government. Subsequently, the Israeli parliament was re-tasked with the job of government formation. If the parliament fails to nominate a candidate for prime minister and a cabinet is not approved within the next 21 days, Israel will be looking at the prospect of a fourth general election in little more than a year. The date for the possible next general election has already been set for August 4.