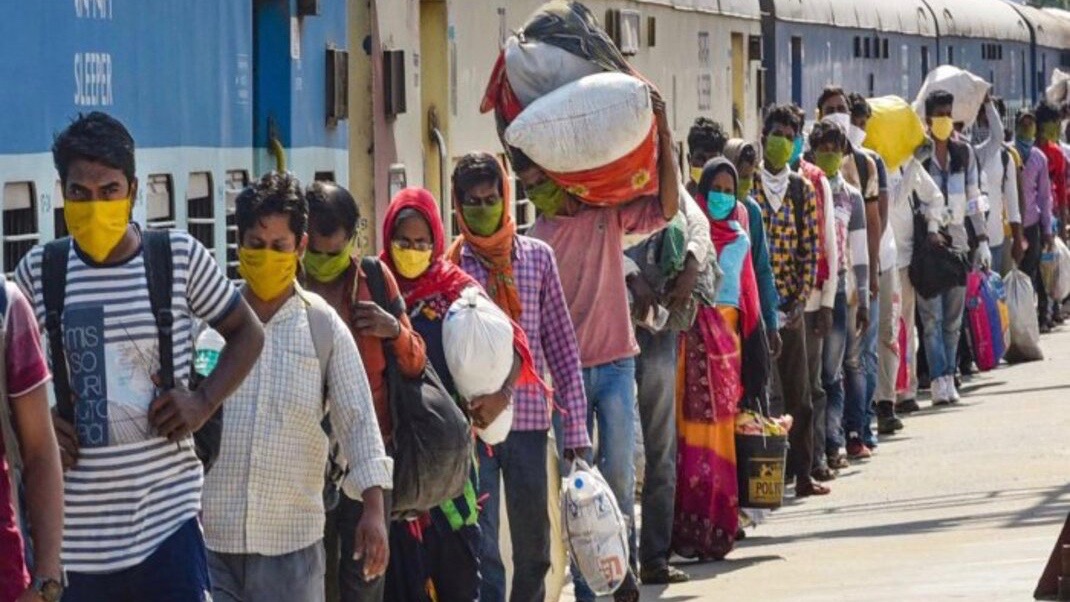 With the introduction of the special train services, tens of thousands of migrant workers have been seen scrambling to get a seat aboard these trains.

The government of the Indian State of Karnataka has reversed its earlier decision and has sought the resumption of special train services to help migrant workers return to their native States amid the COVID-19 crisis. The decision came after 10 central trade unions registered a protest with the government, which is run by the far-right Bharatiya Janata Party (BJP). The Karnataka government had earlier decided to seek a halt to these services following a meeting with the real estate developers association. The real estate developers reportedly wanted to retain the migrants to ensure cheap labor for their projects.

The 10 central unions, under the banner of the Joint Committee of Trade Unions (JCTU), submitted a letter to the State labor minister Shivram Hebbar, on May 6, Wednesday, demanding the resumption of the special train services for migrant workers.

The letter pointed out that the government’s decision to hold back migrant workers against their will in the capital, Bengaluru amounted to a blatant violation of Article 23 of the constitution which prohibits forced labor.

Hundreds of thousands of migrant workers had been stranded across India without food or money following the imposition of a country-wide lockdown on the midnight of March 25. Reports emerged of migrants walking hundreds of kilometers in a bid to reach their homes. Many died of exhaustion on the way.

Following enormous pressure from trade unions and social justice organizations, the central government, also led by the BJP, finally announced special trains to ferry stranded migrant workers to their home States from May 1. Thousands of migrants used these trains to return to their homes.

However, the Karnataka government decided to seek a halt to this service from May 5. This was after a meeting between chief minister B.S. Yediyurappa and representatives of the Confederation of Real Estate Developers Associations of India (CREDAI). CREDAI is an influential association representing giants of the construction industry. Members reportedly complained to the chief minister that the continuation of the special trains would lead to a shortage of labor and create problems in the completion of projects and cashing-in on the property sales on time.

Meenakshi Sundaram, general secretary of the Karnataka State wing of the Centre of Indian Trade Unions (CITU), one of the members of the JCTU, told Peoples Dispatch that banks generally release loans to customers buying these properties from builders, only after the completion of at least 80% of the project’s construction.

Usually, construction activity in Bangalore accelerates during the summer months of March and April, and is completed before the onset of the monsoon. However, the lockdown imposed to contain COVID-19 brought work at the construction sites this season to a halt.

An exodus of cheap labor from the city at this time, when a large number of projects are yet to reach 80% completion, will make it difficult for the builders to turn their investments into profits within the coming few months.  Sundaram pointed out that the construction firms did not care much if laborers hailing from Karnataka returned to their native villages in the same State. However, those hailing from the state of Bihar are often paid very little money and can be called into work throughout the day. “So they want them to stay back,” Sundaram said.

The unions said that holding workers back in the city against their will is unacceptable and that it amounted to enforcement of forced labor. It is also a violation of freedom of movement guaranteed in Article 19(1)(d) of the constitution, JCTU’s letter pointed out.

The controversy over the government’s decision grew when Manjunath Prasad, nodal officer for inter-State travel from Karnataka, said “These are people who have come to work in Bangalore [Bengaluru].. Once there is employment, normalcy will get established… So why go back then?”

He added, “Those who still want to go back can do so using their own vehicle.”

However, few of these migrant workers can afford their own vehicle. The trade unions said in the letter, “64% of migrant workers are left with less than Rs. 100 (USD 1.32).. Only 6% of them [have] received full wages.. and only one in five received rations.”

The same builders and contractors who are reportedly trying to retain the workers “completely abandoned the workers, leaving them to scrounge for food and money” when the lockdown was first imposed, the letter states.

The migrant workers are also being harassed by landlords and slumlords with eviction threats as they are unable to pay rents. Many have also been subjected to police brutality.

The Karnataka government’s decision amounts to “the worst assault on the workers whose labor has contributed immensely to Karnataka’s flourishing,” the unions had protested.

Following the protest by the unions and other sections of civil society, the government gave in and said the train services would be resumed