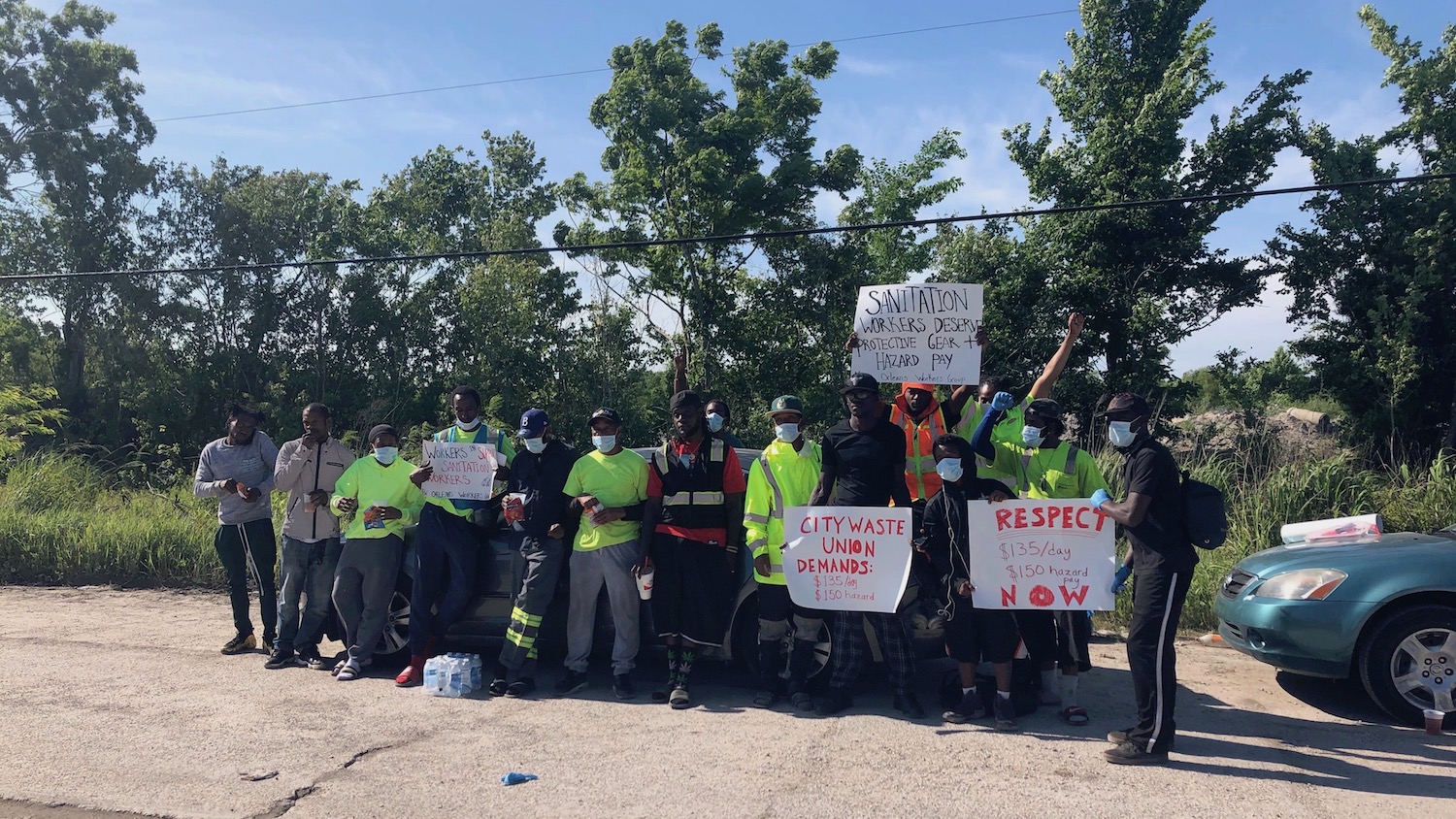 In the wake of the coronavirus pandemic, across the world workers on the frontlines of the battle against the spread of the disease have been organizing to demand that governments and employers provide them greater protection. In New Orleans, a group of sub-contracted sanitation workers who work as “hoppers” on garbage trucks have been on strike since Tuesday, May 5, to demand hazard pay and personal protective equipment (PPE).

The workers in New Orleans said they are not being provided PPE by their employers and are being exposed to coronavirus and other health hazards on the job. Due to these risks, they are demanding $135 standard day rate plus $150 hazard pay per day until the end of the pandemic. They also demand the provision of adequate protective equipment everyday and the 7 paid sick days hoppers are entitled to under the city’s Living Wage Ordinance

The workers are not directly employed by the city, and their conditions are related to their precarious position as sub-contractors. The city of New Orleans has a $10 million contract with Metro Services Group, a private corporation, to garbage and recycling collection services for the city. The group of sanitation workers on strike are not even hired directly by the Metro Services Group but through People Ready, an app-based temporary hiring agency.

The response of New Orleans Mayor LaToya Cantrell to the sanitation workers’ strike was essentially to deflect the responsibility towards the workers’ safety on to Metro Services Group. She released a statement saying that “Metro is responsible for providing workers with the necessary items for their safety. This would include masks, gloves, etc.”

Sanitation worker Greg Woods spoke to New Orleans local news and explained that many of the issues they are raising “have been going on before the coronavirus even came. We get paid late, everything is bad.” He also pointed to the fact that they work grueling hours from 4:20 am until 4 pm and their pay for this labor is insufficient.

In 2015, the city of New Orleans passed a resolution to guarantee that city-contracted workers receive a living wage. According to a 2017 study by Louisiana Association of United Ways in the Orleans Parish which encompasses the New Orleans metro area, a living wage to support a family of four is $26 per hour, much less than what the hoppers are paid who do work for the city.

The workers are also fighting for the right to form a labor union – the City Waste Union – in order to advocate for better working conditions. They drafted a petition to raise their demands with mayor Cantrell and to call on her to intervene on their behalf with Metro Services Group. The petition states, “Some of our most essential workers are not being treated with the dignity and respect they deserve. During the COVID-19 crisis, New Orleans garbage hoppers are working long, grueling shifts in bad conditions, without adequate proper protective equipment (PPE), for low pay… Our sanitation workers put their lives on the line every day to keep this city safe and clean, and now we must support them as they organize for their rights.”

New Orleans and the state of Louisiana were hotspots early on in the outbreak of the COVID-19 pandemic in the United States. The State of Louisiana has recorded 30,652 confirmed cases and 2,135 deaths, and 1,432 people have been hospitalized.