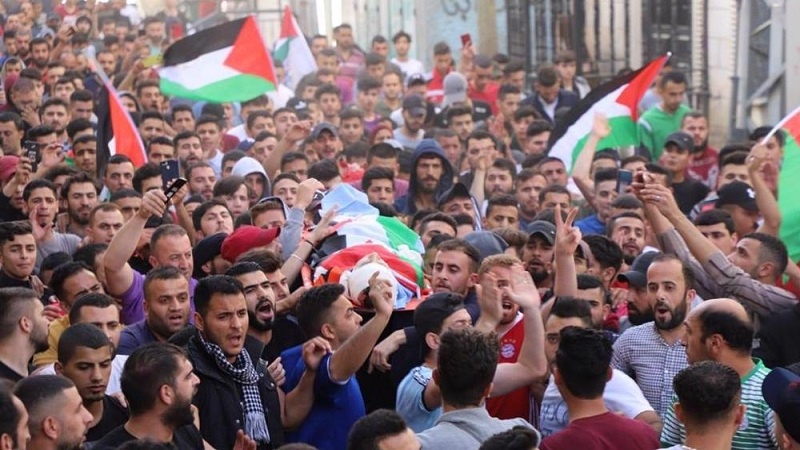 Zaid al-Fayumi was killed when Palestinians were protesting the entry of Israeli soldiers in a refugee camp near Hebron in the occupied West Bank.

Another Palestinian youth was shot and arrested by the Israelis near the Qalandiya check post, north of Jerusalem. Israel has built more than 100 checkpoints in and around occupied Jerusalem to restrict the movement of Palestinians. The check points are in addition to settlers-only roads, the apartheid wall and several other obstructions created by the occupying forces.

Israeli forces once again attacked the camp and ransacked several Palestinian houses. 12 more people were arrested following the death of the Israeli soldier.

According to the Palestinian Prisoners’ Society (PPS), 13 more Palestinians were picked up by the Israeli forces from the Silwan neighborhood in Jerusalem, WAFA reported.

PPS recorded several other similar detentions carried out all across the occupied West Bank. According to the PPS, all the raids were made without any search warrants. The group noted that Israeli forces regularly enter Palestinian localities arbitrarily, ransacking houses and destroying property, even using force despite the presence of children.

Most of the Israeli detentions are illegal and in violation of the established international humanitarian laws and even Israeli domestic laws. Hundreds of Palestinians are currently being held in Israeli prison and detention centers without any formal charge or trial. Many of them are incarcerated for long periods of time and denied basic rights.

Israeli occupation forces have also continued their policies of aggression against Palestinians despite the outbreak of COVID-19 in both Israel and the occupied territories. The raids on May 12-13 came on the eve of the Nakba day on May 15 – marked by Palestinians as a remembrance of the massacre and forced displacement of thousands of Palestinians during the creation of Israel in 1948.