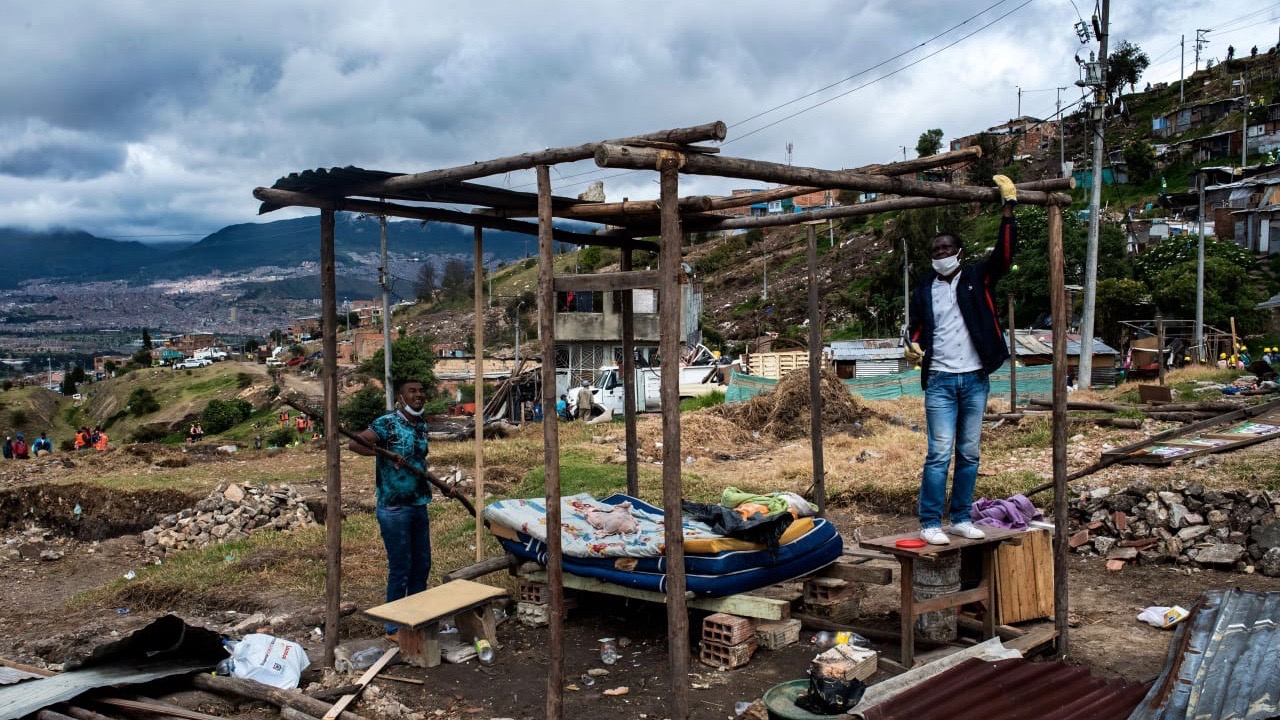 Nearly 700 poor families living in the Altos de la Estancia neighborhood are being forcefully evicted in the midst of the coronavirus outbreak without any government assistance. Photo: Colombia Informa

On May 11, Colombian social movements and human rights organizations denounced the arbitrary, violent evictions of families in the Altos de la Estancia neighborhood in the Ciudad Bolívar district, Bogotá, amid the COVID-19 pandemic. They also criticized the Mayor of Bogotá, Claudia López, for leaving vulnerable families on the streets during the health emergency.

Since May 2, the officials from the Mayor’s Office and Colombian Public Force have been forcibly evicting the families living in shacks on a 46,000-square-meter plot of land located in the Altos de la Estancia. The justification for the evictions is that the homes are built on an unstable property and the people residing there are at high risk of possible landslides.

People in the community also denounced that they were violently attacked by the Mobile Anti-Disturbances Squadron (ESMAD) officials, the Colombia National Police force, who have been the force on the ground to carry out the eviction orders issued by authorities. The denouncements have been corroborated with videos that show the injuries suffered by members of the community from the attacks. Community members also reported that one of the homes was demolished when there was an elderly man inside and ESMAD officials fired tear gas into a house with minors.

Colombian media organization, Colombia Informa, which has been closely following these evictions, denounced that on Sunday their correspondents were prevented from covering the evictions and were removed from the site by security forces.

They also reported the harassment of journalists present at the scene by the police force. They informed that the police asked them for documentation to verify that they were actually members of the media. One of the Colombia Informa correspondents, who did not carry his press card with him, was detained by the police with his camera, despite the confirmation of his credentials by the news agency. He was released after spending several hours in detention.

The Foundation for Freedom of the Press (FLIP) denounced the incident and deemed it as “an attack on press freedom.” “It is an attack on press freedom because there are no reasons to make an arrest under these conditions. Despite the fact that he did not have a credential, he was carrying out journalistic work that must be guaranteed for anyone. In Colombia, journalism is an occupation that does not require a professional card and for this reason, the lack of credentials is not an argument to obstruct the work,” the organization said in a statement.

Altos de la Estancia is a park area in the Ciudad Bolívar district, with high terrain risk. It is occupied by homeless locals, migrants, peasants, Indigenous people and unemployed workers. Nearly 700 poor families live in precarious conditions in the slums built on the land. The majority of the people are victims of armed conflicts and do not even have to eat, much less to pay rent.

Many have questioned the intentions of the district government for speeding up the eviction process during the quarantine, since the land has been occupied for more than 20 years.

Ana Teresa Bernal, a councilwoman of Bogotá from the Humane Colombia Party, asked the Mayor’s Office for a detailed report on the situation in the neighborhood and the alleged human rights violations that occurred during the evictions.

The eviction of people in the midst of the spread of novel coronavirus, the flagrant violation of their human rights, and prohibition of media coverage raises serious questions to the so-called ‘progressive’ government of Mayor Claudia López. This is not the first time that the city administration has responded with force and repression to marginalized communities already suffering in the pandemic.

As of May 13, there were 12,272 confirmed cases of COVID-19 in Colombia and at least 493 deaths. The lockdown measure remains in place in Colombia, but how can people quarantine if their homes were destroyed?