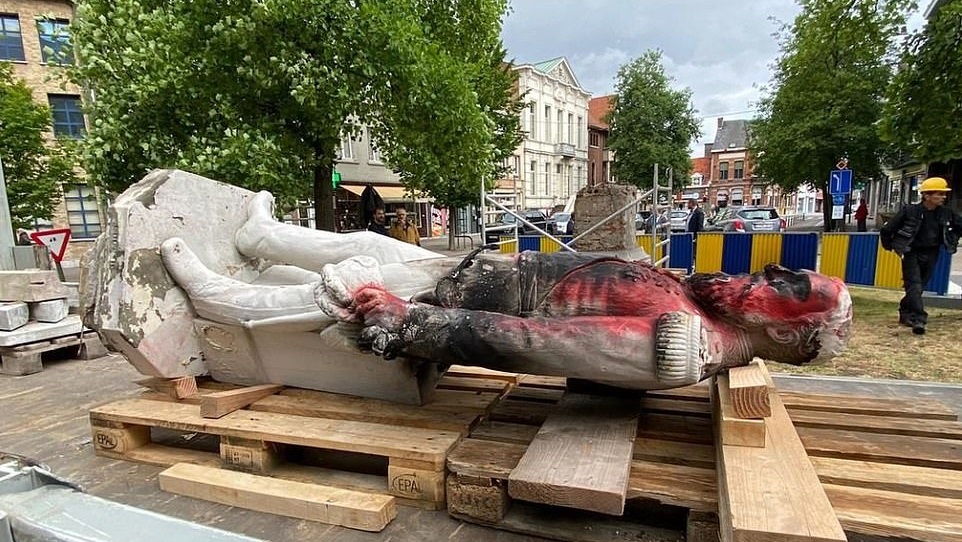 A statue of king Leopold II that was taken down in June.

From 1885 to 1960, Congo was a colony. Initially the personal territory of King Leopold II, the Congo later became the property of the Belgian state. This story is still often presented as a nuanced, even positive undertaking for the colonized country. The reality is quite different.

Historian Guy Vanthemsche is explicit about the reasons for colonization: “There is no doubt that Belgian colonization was originally intended to generate profits.” Thus, the administration of the colonial state had been set up primarily to guarantee the profits of big business. The Belgian Ministry of the Colonies gave the following directive to the colonial administration: “The broadest possible support from the authorities must therefore be ensured for economic enterprises. Officials will endeavor, as far as possible, to facilitate the settlement of planters, industrialists and traders in their region.”

In 1885, all the available land belonged to the State, thus to Leopold II. The best land was given to the settlers. As a result of this policy, the Congolese population found itself stripped of their land, while some families had been living there for centuries.

Many Congolese were pushed into forced labor: in 1937, 700,000 were subject to such a system. On the other hand, ‘normal’ wages were also derisory. In 1924, vice-governor G. Moulaert estimated the annual cost of a Union Minière worker at 8,000 francs, while the worker brought in 50,000 francs a year. The average wage of a Congolese worker was not even enough to buy the minimum amount of food. The big companies had no scruples. They were offered monopolies on huge parts of the Belgian colony in the form of concessions. The favored companies, which received the largest concessions, were able to build a huge empire within a few decades and send their gigantic profits to Belgium. On the eve of Congo’s independence, 75 % of the colonial economy was controlled by three powerful financial groups: Société Générale, the Empain Group and Banque de Bruxelles.

The objective of generating profits was therefore largely achieved. Between 1896 and 1907, when the Congo was the personal property of Leopold II, the colony brought approximately 450 million euros to the Crown Estate. These profits did not return to the Congolese people, but were invested in prestigious projects in Belgium, which still mark the landscape of several Belgian cities. Thus, the galleries on the Ostend dike were directly financed by Congolese rubber. After 1908, when the Congo became the property of the Belgian state, profits continued to grow, especially from the exploitation of Congolese mines. The Mining Union was founded in 1906. Its earnings increased to such an extent that during the last ten years of colonization, the company was able to distribute 31 billion francs in net profits in the form of dividends.

The wealth accumulated during this period represents the foundation on which the fortunes of the wealthiest Belgian families were built. If you look at the list of the 200 richest families in Belgium today, you will see that among the 23 families at the top of the ranking, at least 11 have acquired their fortune in part through colonization. These are the Solvay, Emsens, Boël, Janssen, Bekaert, Lippens, Vandemoortele, Van Thillo, Bertrand, Dieryck and van Baaren families. While some people claim that Belgian colonization was beneficial for both Belgium and the Congo, these families, for their part, know full well that all the benefit went to them.

It was all to the benefit of large Belgian companies, but obviously not of the Congolese people. The much-talked-about infrastructure was not put in place to enable sustainable development in the Congo. In the European colonies, roads were built with a structure similar to the veins of a tree leaf: cities and economic centers (plantations, mines) are connected as branches to the port, or later to the airport, in the direction of the “mother country.” This ‘fantastic infrastructures’ was mainly used to transport looted wealth to Belgium, or to facilitate the movement of soldiers if military intervention was necessary.

In the eyes of the impoverished Congolese people, colonization was therefore far from being a win-win situation. During the colonial period, populations revolted on several occasions against the colonial administration. The most important revolt broke out in 1941 in a mine of Union Minière. Despite the repression and murder of one striker, the strike movement spread rapidly to other mining operations in the surrounding area.

In the end, the governor of Katanga province, Amour Maron, had 200 strikers gathered on a football field in Lubumbashi, at the request of the director general of the Mining Union, G. Mottoulle. The leader of the strike, Leonard Mpoyo, wanted to approach Maron to propose negotiations, but the governor preferred to give the signal to the gunmen, who shot the 200 strikers. According to official accounts, there were 45 victims that day, but that figure must certainly be revised upwards. The next day, the miners returned to work. Thus the biggest strike in the history of Belgian colonization came to an end.

In 1960, the Congo gained independence, but the economic plunder of the country has not stopped. It continues, but in a new form, adapted to our times. This is called neo-colonialism. This means that the economic plundering of developing countries. Multinational corporations are playing cowboys in the Wild West. They pay practically no taxes, they manipulate the prices of raw materials to maximize their profits, influence domestic policy, etc. According to Sally N’dongo, an expert on neo-colonialism, the current system is even preferable in the eyes of Western multinationals: their profits can be maintained, but the responsibility for security, infrastructure, education, which was once the responsibility of the colonial power, can now rest with the ‘independent’ state.

Racism and colonialism: two sides of the same coin

Colonialism, neo-colonialism and the huge profits they generate needed to be legitimized. Colonization was often described as something positive for the colony, even today. However, this justification was not enough. Racism was also used for this purpose.

Colonization was part of the civilizing mission in the eyes of Europeans, a mission that was based on a racist ideology. In 1947, the Secretary General of the Belgian Congo wrote the preface to a book on the ‘Black Elite’, ‘the evolved’. It establishes a clear hierarchy: “If the black elite must be aware of its superiority over the semi-wild natives, it must also clearly know its duties towards the Absolute Power.” This kind of uncomplicated racism was on the defensive after the Second World War and the victory over fascism. However, since the crisis of the 1970s, it has been on the rise again, and the forces that openly spread racism in society are growing. In this new context, colonialism can once again be defended ostensibly and racism appears to be in good taste again.

Racism serves to legitimize the profits of the richest. As long as a culturalizing discourse hides neo-colonialism, the Solvay, Van Thillo and Lippens families will remain out of reach. The inconvenient truth in the history of the Congo is that behind the brutal repression, the severed hands, racism, oppression and economic exploitation, are hidden financial interests.

We can only understand and fight racism if we are aware of this. At present, teaching colonial history at school is still not compulsory in Belgium. The school curricula need to be updated and we need to seriously confront our colonial past. And if one teaches about colonization, then the focus should be on the profit motive hidden behind it. Explaining to young people what colonization is will not put an end to racism nor to the structural exploitation of the countries of the South. However, it is a necessary first step, which allows for an analysis of the underlying problem: an economic system that is based on profit and exploitation.

Today, the question arises of the monuments that still abound in our streets: statues and tributes to Leopold II, to other colonial rulers. Within the decolonization movement, the question arises: should we tear down the statues? And what to do with them? Wouldn’t it be better to add an explanatory plaque? The problem with these types of plaques is that they may miss their purpose. They do not change the way these monuments shape our public space, and are far less visible than the statues that glorify colonial rulers.

Let us replace these monuments with anti-colonial works of art, which promote equality and emancipation, or which illustrate the crimes of Lepold II and others. Let us place the statues of Leopold II in museums, where they can be used for educational purposes. In this way, we will be able to combat colonial crimes and the resulting persistence of racism with a vision of hope, equality and solidarity.

The article was published in Solidaire.org and translated by the Secretariat of the Department of International Relations, Workers Party of Belgium (PTB-PVDA)