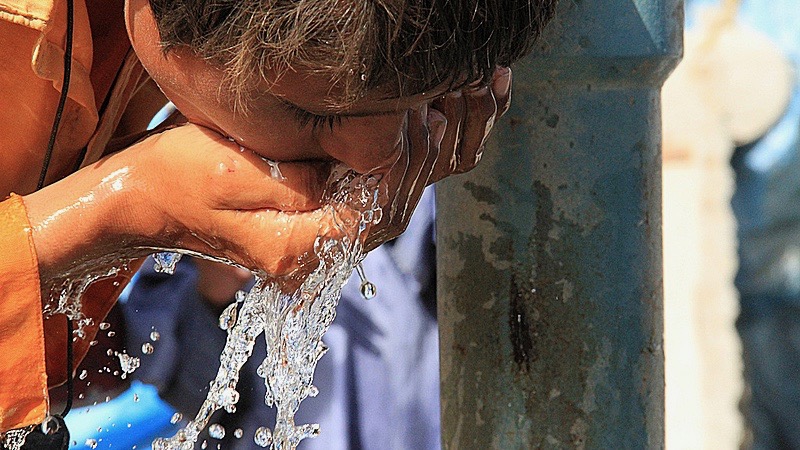 According to the WHO, over 2.2 billion people do not hava access to drinkable water. Photo: Vick Francis/DFID

When she moved to the Jardim Emburá neighborhood, in São Paulo’s south side, Kátia Marques knew that there was no running water, and without any other options, adapted to the routine of filling buckets with water from the trucks that come by. What she didn’t expect however, was that five years later she would still be in the exact same situation.

Just like Kátia, who is a mother of two, hundreds of families in the area live under the same conditions. They belong to the 16% of the Brazilian population, roughly 35 million people, who have no access to treated water, according to data from the National Sanitation Information System (SNIS).

There are unsanitary water wells in almost every backyard in Jardim Emburá. In order not to depend on the scarce tanker trucks sent by the municipality’s water treatment company (Sabesp), the only option Kátia has is to rely on the ground water to cook and shower with.

“The well water comes out brown and we have to wait for it to sit. We use chlorine they give us at the health center and treat the water ourselves. We have to wait 3 hours for the chlorine to work and clean it a bit,” explains Kátia, who is 33.

Daily life in Jardim Emburá is one of the many cases in Brazilian society that call the July 28th, 2010, United Nations resolution – enshrining access to clean water and sanitation as a Human Right – into serious question.

The data confirms the gravity of the situation. In 2019, only 46% of the sewage generated in the country was treated, with almost 100 million people using alternative means of waste management, either with ditches or by directly dumping it into rivers.

Edson Aparecido da Silva, executive secretary of the National Observatory of Water and Sanitation rights, highlights the importance of the UN resolution but points out that many countries have yet to incorporate these rights into their legal systems.

Such is the case with the Brazilian Constitution, which establishes the right to healthcare, education, security and housing, among other things, but doesn’t mention access to water and sanitary conditions as a social right.

“The Human Right to access water and sanitation is effectively accomplished when all people, independent of their capacity to pay or not, independent of the conditions in which they live, are able to access these services. I’m also including the homeless into these rights, a population that is completely excluded [from sanitation systems],” he criticizes.

Though acknowledging the critical situation a good portion of Brazilians are living in, the expert also states that since the early 2000’s, there was progress made on the issue, in particular after the creation of the Ministry of Cities in 2003, during the Luiz Inácio Lula da Silva government.

However, over the last few years, according to the executive secretary of Ondas, things have gotten worse due to budget cuts and the extinction of social control mechanisms previously in place.

In his view, the new Basic Sanitation law is the best expression of this retrogression. Sanctioned by Jair Bolsonaro on July 15th, the bill facilitates the privatization of sanitation services. Starting now, public companies will not be able to be hired directly, but will have to compete in bidding wars with private corporations.

Furthermore, the president vetoed part of the bill that would extend current contracts with public entities for another 30 years, which was included in the proposal by opposition lawmakers and supported by state governors worried about privatizing the essential services sector.

Information gathered by the Brazilian Institute of Geography and Statistics (IBGE) in 2016, registered 166.8 hospital admissions per 100,000 residents due to diseases related to a lack of sanitation services. If you consider that national population at the time was 207.7 million people, over 346 thousand had to go to hospital due to unsanitary conditions.

Access to potable water is undoubtedly, a public health issue all over the world. For example, the World Health Organization (WHO) affirmed that more than a quarter of children’s deaths in 2017, were a result of environmental factors such as lack of sanitation, pollution or the consumption of water unfit for drinking.

To add to this, illnesses such as dengue fever, zika and chikungunya have their vectors spawning in dirty, still water. Much like the improvised wells we find in neighborhoods with no access to clean water like Jardim Emburá.