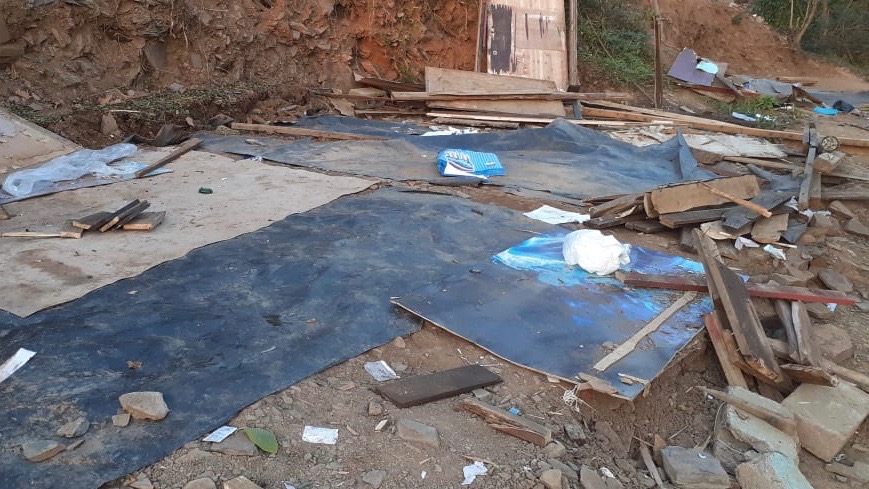 On Tuesday, July 28, 13 shacks housing urban poor in the informal settlements of eKhenana occupation in Cato Manor, Durban, were demolished in a violent eviction. The action was carried out by South Africa’s Metro Police, the Anti-Land Invasion Unit and the notorious private security company, Calvin & Family Security.

Without a court order, these violent evictions were carried out at the behest of eThekwini municipality, which has, throughout the lockdown, unrelentingly ordered demolitions after demolitions of shacks in informal settlements, leaving hundreds homeless amidst the pandemic.

The materials used to build these shacks – mostly corrugated metal sheets and tarpaulin – were also seized in order to prevent the shack dwellers, who were rendered homeless, from rebuilding again. It is also alleged that their cellphones and money were also stolen.

Two shack dwellers who sustained injuries in the course of the violent eviction were hospitalized. “Phumelele Mkhize, 29, was severely beaten with the back of the guns carried by the attackers, and…(slashed) on the arm with a bush knife while (she) was sitting inside her home. Msawakhe Magwaza, 30, was also badly injured after being assaulted with the back of guns. The chairperson of the occupation, Lindokuhle Mnguni was also injured. Kwanele Mhlongo, a mentally disabled 15-year-old was also severely beaten,” Abahlali baseMjondolo (AbM) said in a statement.

AbM is a shack dwellers’ movement which has been at the forefront of the struggle for right to urban housing since its inception in 2005.

Their means of struggle is through direct action, in which unused lands close to urban centers which offer some economic opportunities for the workers are occupied. Once occupied, shacks are built on these lands by its members by using materials they can forage, with no assistance from the government. The little water and electricity supply available in their settlements are self-connected. Many communities have also built churches and child care centers.

One such community was built in the occupation called eKhenana which started in August 2018. Since then, the settlement has come under repeated attacks. The community has continued to resist these demolitions.

One of the Abahlali leaders, Senzo Gumede, who organized a militant resistance movement by leading the community to set up roadblocks to defend against such attacks, was assassinated by unidentified gunmen in December 2018.

“As is the case in many of our occupations we have also lost a comrade in this occupation,” the movement reminded its members in a statement in April 2019 when this occupation had become large enough to form a separate branch. Since then, they have endured many more such attacks, rebuilding the shacks after each demotion.

After another attack on Tuesday, AbM yet again recollected the price its members have paid for its struggle for housing rights.

“On 14 April last year Siyabonga Mngadi, a comrade on the occupation, was shot by an unidentified man. On 10 November last year 24 women were arrested and detained by the police. At the same time three comrades were injured during an attack by the Metro Police and the Anti-Land Invasion Unit and had to be admitted to hospital. Landu Tshazi was shot in the testicles at point blank range,” its statement said.

On December 27, 2019, the court granted an order prohibiting evictions without a court order.

The attacks, nevertheless, continued, even after the lockdown which was announced in March 2020 to control the COVID-19 pandemic. The government’s announcement of a freeze on evictions during the lockdown made no difference to the eThekwini municipality, which did not relent.

The municipality claimed that it was not carrying out evictions, but demolitions of illegal occupied structures. However, multiple videos show people being dragged out their homes which were being destroyed.

“The occupation was repeatedly attacked during the lockdown. On a number of occasions the army participated in these attacks,” Abahlali claims. “These evictions were all illegal and violent.”

Under such relentless attacks, the Abahlali members of eKhenana occupation had carried forward the agenda for self-reliance by undertaking urban farming to feed the community, inspired by the Landless Rural Workers’ Movement of Brazil, better known by its Portuguese acronym – MST.

“[T]he occupiers have established a democratically organized co-operative and are running a successful urban farming project, including vegetables and chickens, to build food sovereignty. They fly the Abahlali and the MST flags at this occupation, and are implementing the farming methods used by the MST in Brazil,” Abahlali said.

“The ANC is unable to understand the self-organization of the oppressed, even though it was the struggled led by women like Dorothy Nyembe and Florence Mkhize in Cato Manor in 1959 that first made the ANC popular in Durban,” its statement said, reminding the ruling party of its radical roots which originally won its mass base in the country during the struggle against Apartheid.