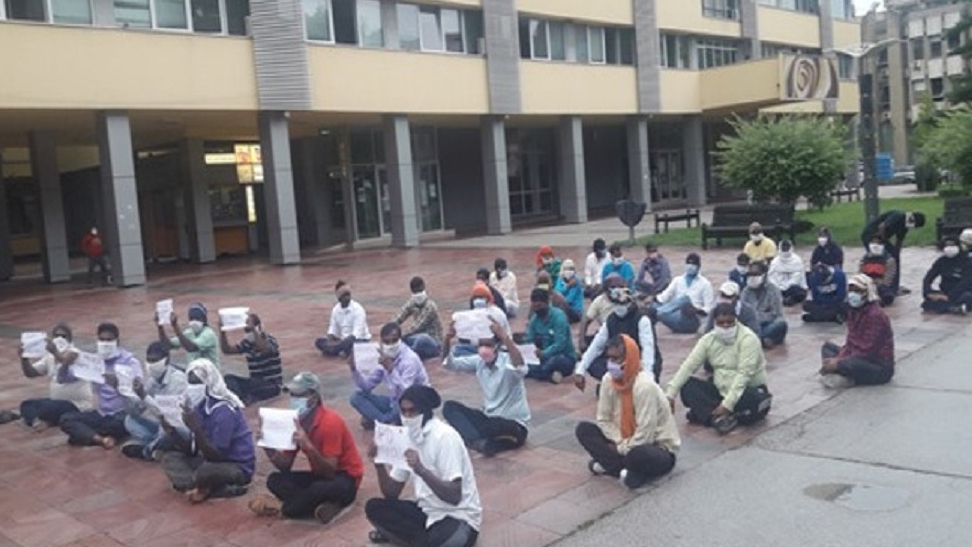 More than 40 construction workers from India have been struggling in Serbia during the COVID-19 pandemic without salary and even without proper food. (Kraljevo.online)

A group of construction workers from India organized a silent demonstration in front of the seat of the city administration in Kraljevo in Serbia last week, demanding salary, food and repatriation. More than 40 workers who were hired through the company  Nikolić LLC have been struggling in Serbia during the COVID-19 pandemic without proper pay and food. According to reports, the Indian embassy in Serbia has stated that they are trying to arrange the repatriation of the workers.

On August 19, Krajilevo.online reported that the workers accused the company of not providing them with proper food for the past 15 days. The impoverished workers also demanded that the authorities help them get back to their families in India. Masina has reported that construction workers from India have been coming to Serbia for many years. The workers are given employment at various construction sites through a company called Nikolić. The company has courted controversies in the past because of the poor conditions Indian workers are made to work under.

The New Communist Party of Yugoslavia (NKPJ) has extended its solidarity and support to the workers on strike.

In a statement released on August 21, NKPJ said that the Indian workers haven’t received any money during four previous pay cycles, February being when they received their last pay checks. As a result, they stopped work during summer and demanded late pay from the owner of the company. The workers come from poor families and the work they do in Serbia is their only source of income. Nikolić LLC owes 2,954 USD to each of the 51 workers.

This isn’t the first time that Nikolić LLC hasn’t paid its dues to workers from India. Earlier this year, Indian workers working on the construction of the fast rail between Belgrade and Budapest and of Corridor 11 complained that the company was late in paying their wages. They also accused the company of making them work under poor work conditions and of deducting pay for offenses allegedly committed by them, without any legal grounds to do so.

“Nikolić LLC employed workers from India via the American company: Idea Capital. The owner of Nikolić LLC, Nina Nikolić, is also the director of that company’s branch in Serbia. The NKPJ asserts that the Indian workers’ dismal fate is yet another transparent example of the perniciousness and the exploitative nature of so-called lease work, that is, hiring labor from agencies and private enterprises. These workers don’t have any protection and the employer can harass them in many ways without having to bear any consequences. Especially scandalous is the fact that private firm Nikolić LLC, known for violation of workers’ rights and not paying wages, receives the most lucrative business which is financed by the Serbian state or is realized through credits for which the state is the guarantor. The NKPJ demands of the owner of Nikolić LLC to immediately pay all late wages to the workers from India. In the case that the private employer continues to refuse to pay out wages, the authorities in Serbia should, in accordance with the law, oblige them to do so”, NKPJ added in its statement.

The NKPJ has also demanded that the Labour Inspection must prosecute Nikolić LLC for not paying out wages and not registering some of the workers. “As they have shown to be an unscrupulous and greedy employer, the state should no longer finance any business with Nikolić LLC,” said NKPJ.