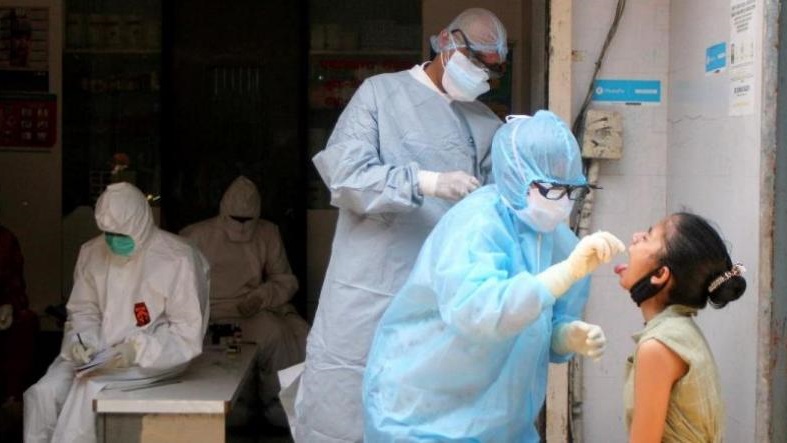 It has become customary to say that given its huge population, India is doing much better than say, the US or Europe. This is how officialdom is trying to explain away the shockingly high numbers of total confirmed cases (over 340,000 on August 29) and total deaths (nearly 63,000) – both of which put India at the third position globally, behind the US and Brazil.

However, the comparison is not really valid. India needs to be compared not with the US and Europe but to regions of the world where the population’s age, economic standards and healthcare access is similar. Such a comparison reveals that, in fact, India is doing quite poorly even in comparison to other developing countries.

Let us start with cases and deaths as proportion of the population. This is a far better measure of a country’s performance against COVID because country-wise populations vary enormously and it is unreasonable to compare India (population of 1.38 billion crore) with, say, the United Kingdom (about 70 million) or Sweden (about 1o million).

To adjust for population, the usual and accepted way is to calculate cases and deaths per 1 million population. This is shown in the chart below with the left hand panel showing the number of cases and the right hand one showing deaths, both per million. The data is from Worldometers’ collation from 213 countries/territories. 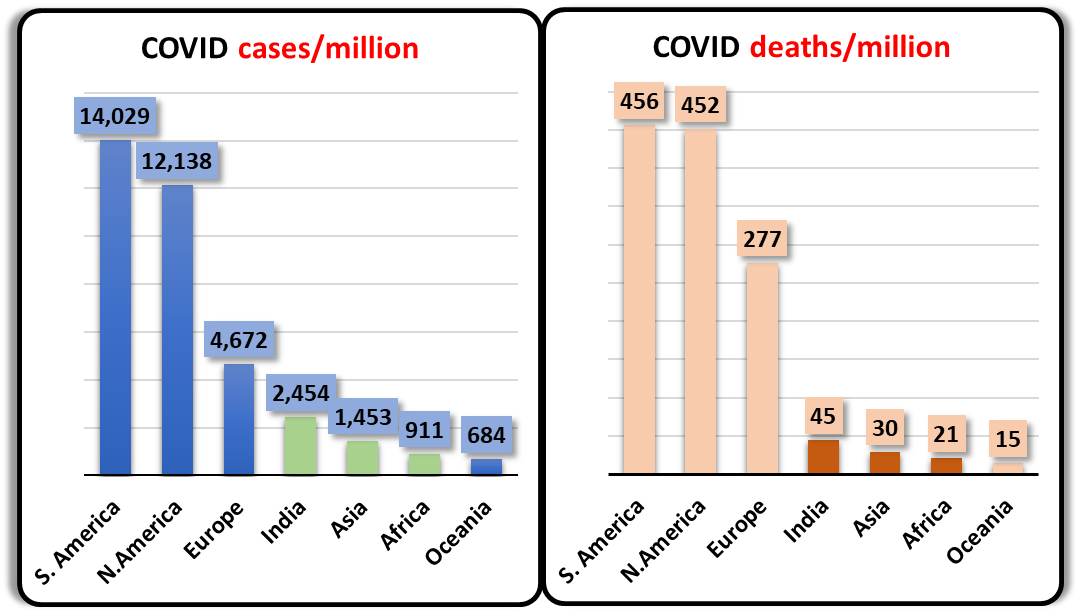 Cases Per Million Population: India’s tally of 2,454 is half of Europe’s, one-sixth of North America’s and nearly one-seventh of South America. Clearly, India is doing far better than these three regions. But the real comparison needs to be done with Asia and Africa. This can be seen in the chart above – India is far worse than the whole of Asia (1,453 cases per million) and over 2.5 times more than Africa. These are regions where the countries are similar to India in terms of per capita GDP (gross domestic product), median age, poverty and hunger levels and access to healthcare services.

In fact, if one were to rank the 106 countries in Asia and Africa in terms of cases per million, with the best at top and worst at bottom, India would come in at a very poor 80th position.

Deaths Per Million Population: On this count, too, India fares rather badly. With 45 deaths per million, India is much better off than Europe, which is at 277, while both North and South America are almost 10 times more. But, again, if you compare India to Asia and Africa, the real picture is revealed: Asian average of deaths per million is just 30 while Africa is even lower at a mere 21. In the rankings of all Asian and African countries, India is at 76 out of 106 countries.

India’s ability to counter the pandemic seems to be even worse than its immediate neighbors. Cases per million are: China (59); Pakistan (1,332); Bangladesh (1,860); Nepal (1,248); Sri Lanka (139); and Afghanistan (976), leaving out Bhutan and the Maldives because their populations are very small.

There are several factors at work in determining why India is currently better off than some developed countries but worse off compared with Asia and Africa. The comparison with North America, Europe and even South America is misplaced because the coronavirus hit these regions much earlier (in February-March) than Asia (except China) and Africa.

The chart below shows the trajectory of the pandemic spread across Asia, Africa, Europe and North America, based on weekly new cases taken at one month’s interval for the sake of clarity. Data is from ‘Our World In Data’ portal which collates information from European CDC (Center for Disease Control) data.

Note how, the pandemic hits its first peak in Europe in February and a little later in North America. Till about mid-April, both these regions have more cases than Asia and Africa. 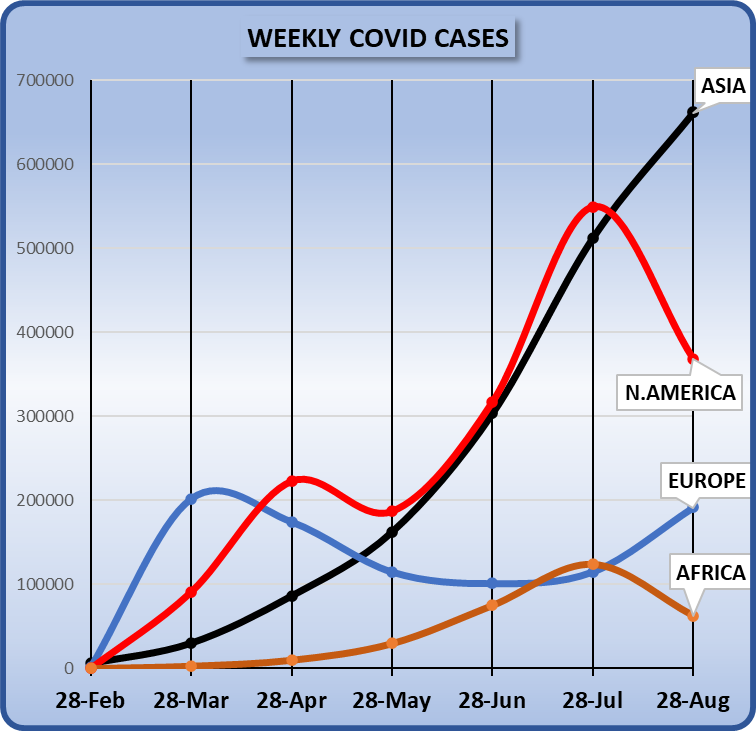 Cases in Asia steadily rise along a steep curve, with no peaks and no flattening ever. By the end of June, North American and Asian cases are seen growing weekly in similar leaps, while cases are seen declining in Europe. African cases are much less, yet rise steadily till about end of July after which there is a surprising dip.

Clearly, the coronavirus arrives and spreads in Asia (except China) and Africa later and its growth is continuous. In China, the number of cases decline after March, yet Asian cases continue to rise as India experiences the onslaught. North America experiences a second wave in June and July, while Europe is going through its second wave currently. Asia is still continuing to rise – mainly because of India.

So, to compare India with North America and Europe is unreasonable – the virus hits different regions at different times, and may even see resurgence.

Besides this, the age of the population is also a major factor. India’s median age is 28 years, that is, half the population is below this age. Compare this with Europe (42.7 years); the US (38.3 yrs); the UK (40.8 yrs). The median age for less developed countries (excluding China) is 26 years while for more developed countries it is 42.1 years. This is possibly the reason why deaths due to COVID-19 are less in Asia and Africa, compared with the more aged population in Europe and North America.

Why is India faring badly?

Despite a delayed start to the pandemic and a younger population, India continues to steadily lose its grip over the fight against the pandemic. The reason is: the way India’s government, led by Prime Minister Narendra Modi and his Bharatiya Janata Party, have mindlessly – and heartlessly – handled the pandemic.

A disastrously conceived and implemented lockdown from March 25, imposed at a four-hour notice on the previous night, the lack of attention to the needs of the huge population with low incomes and negligible savings, the penchant for dramatic announcements and homilies rather than solid ground work, the devotion of energy to use the pandemic for political gain and giving concessions to the super rich, the lack of attention to healthcare facilities, the drive to centralize all power and the tight-fistedness in spending money, including helping the state governments – all these have led to this pass.

Not only has the pandemic devastated the country but the economy is in a tailspin, with economic growth predicted to dip by up to 10.5% next year. It is a double strike – and the people are bearing it with immense pain.

And here’s the final twist in the knife: the pandemic is far from over!

Tens of thousands of Indian farmers set up camp outside Delhi against Modi govt.’s pro-corporate laws