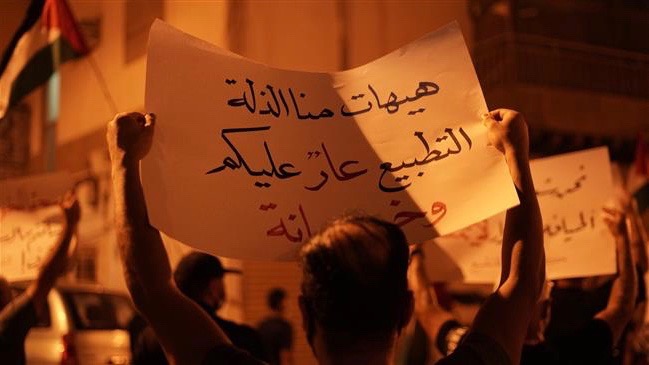 Several sections and groups in Bahrain have publicly opposed the government's decision, including the Bar Association of Bahrain.

Several opposition groups in Bahrain have come out against the government’s announcement of “normalization” of relations with Israel. On September 11, Friday, Bahrain formally recognized Israel, following the UAE government which had announced a similar “normalization” with Israel last month. Bahrain is the fourth country in the Arab region, after Egypt, Jordan and the UAE, to make a tripartite announcement to this effect with the US.

In a statement published by the al-Wefaq party in Bahrain on September 13, Ayatollah Sheikh Isa Qassim, a leading religious scholar in the country, denounced the Israel-Bahrain deal as a sign of the defeatism prevailing among the governments in the region.

Sheikh Qassim, who lives in Iran, said that the governments in the region “want to impose [their defeatism] on the people, and the people have to resist this defeat,” Al-Jazeera reported.

Several other sections and groups in the country have publicly opposed the government’s decision, including the Bar Association of Bahrain. Iran’s PressTV quoted former Bahraini lawmaker Ali al-Aswad say that “it’s a black day in the history of Bahrain.”

Al-Wefaq party deputy secretary general Sheikh Hussain al-Daihi was quoted saying that the Bahraini people are with the Palestinian people and “if it wasn’t for fierce repression [by the Bahraini government], you would have seen all Bahraini squares filled with Palestinian flags.”

Bahrain, like the UAE, was a votary of the Arab Peace Initiative, according to which, normalization of relations with Israel was conditioned on the solution of Israel-Palestine conflict. Signs of Bahrain’s growing closeness with Israel were first noted by critics last year, when it hosted a US-sponsored conference in June on the Israel-Palestine conflict, despite opposition from Palestinians and others. In the conference, US president Donald Trump’s son-in-law, Jared Kushner, unveiled a financial package of around USD 50 billion for the Palestinians in exchange for their acceptance of Trump’s so-called Middle East Peace Plan. Trump has called his plan the “deal of the century”. However, it has been overwhelmingly rejected by Palestinians, who have held several demonstrations inside the occupied territories denouncing the deal.

The Palestinian Liberation Organization (PLO) issued a statement on September 11, similar to the one released post the UAE deal in August, denouncing Bahrain’s move as dangerous and a betrayal of “Jerusalem, Al-Aqsa and the Palestinian cause.”

Saeb Erekat, secretary general of the PLO, in a series of tweets on Saturday, criticized Bahrain’s deal with Israel and alleged that those who are announcing normalization are doing so to help Trump win the upcoming elections in the US at the cost of the Palestinian cause.

The UAE and Bahrain are contributing to Trump's presidential campaign at the expense of the inalienable rights of the people of Palestine.

The normalization race is not the answer to the achievement of Palestinian freedom and independence.

The Trump administration has been actively pursuing the Gulf countries recently, asking them to recognize Israel and normalize their relationship with it. Bahrain, which has the US navy’s Central Command headquarters in Manama, largely depends on the US for its physical security.