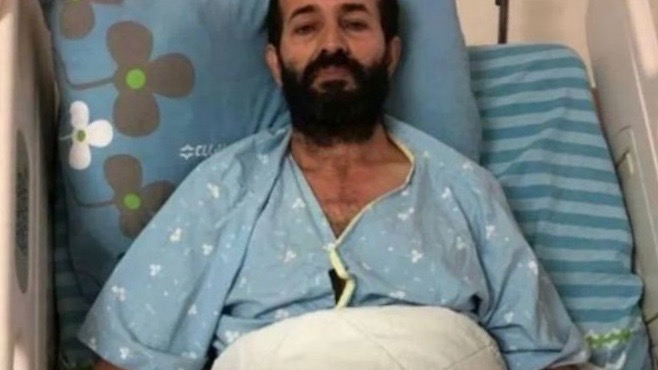 Palestinian administrative detainee Maher Akhras has been hospitalized at the Kaplan Medical Center in Israel. (Photo: via Twitter/Palestine Chronicle)

Palestinian prisoner Maher Akhras is in a critical condition after being on hunger strike for more than 70 days against his illegal administrative detention by Israel. Akhras launched his hunger strike shortly after being arrested on July 27 from his home town of Silat al-Dahr in Jenin district of the occupied West Bank, and has since survived only on water. Doctors at the Kaplan Medical Center in Israel, where Akhras was transferred after his health worsened, are now force-feeding him in an attempt to forcibly end his hunger strike, after receiving permission from the Israeli prison authorities.

According to the Palestinian Prisoners and Ex-Prisoners Commission, the health of the 49-year-old inmate has severely deteriorated, resulting in massive weight loss of over 20 kilograms. He is also suffering from acute headaches, spasms, ear problems, extreme fatigue, loss of consciousness and severe body pain.

At the time of Akhras’ arrest, Israeli domestic intelligence agency Shin Bet had said that he was suspected of being an active member of the Islamic Jihad militant group, without providing any evidence for the same. Akhras’ wife has rejected the Israeli allegations, saying that her husband only campaigned for the human rights of Palestinian prisoners in Israeli custody.

As per media reports, Akhras has been arrested and imprisoned by Israeli security forces multiple times in the past. He was arrested for the first time in 1989, which resulted in a seven-month-long jail term. He then served two years in detention in 2004, 16 months in administrative detention in 2009, and 11 more months in 2018.

With respect to his current incarceration, an Israeli high court ruled in his favor by freezing his administrative detention order. However, the court did not revoke the order completely or pave the way for his release. The prison authorities instead offered to release him after his administrative detention ends on November 26. Akhras rejected this offer and demanded immediate release, as per his lawyer Ahlam Haddad.

The criminal and inhumane Israeli policy of arbitrary administrative detentions has been denounced by Palestinian prisoners’ rights organizations and human rights activists worldwide. Akhras’ case follows that of hundreds of other Palestinian prisoners who have been forced to resort to hunger strikes to end their illegal detention.

Currently, there are approximately 5,700 Palestinians being held in various jails and detention centers in Israel and the occupied Palestinian territories. Of these, an estimated 470 are currently being held under the policy of administrative detention.