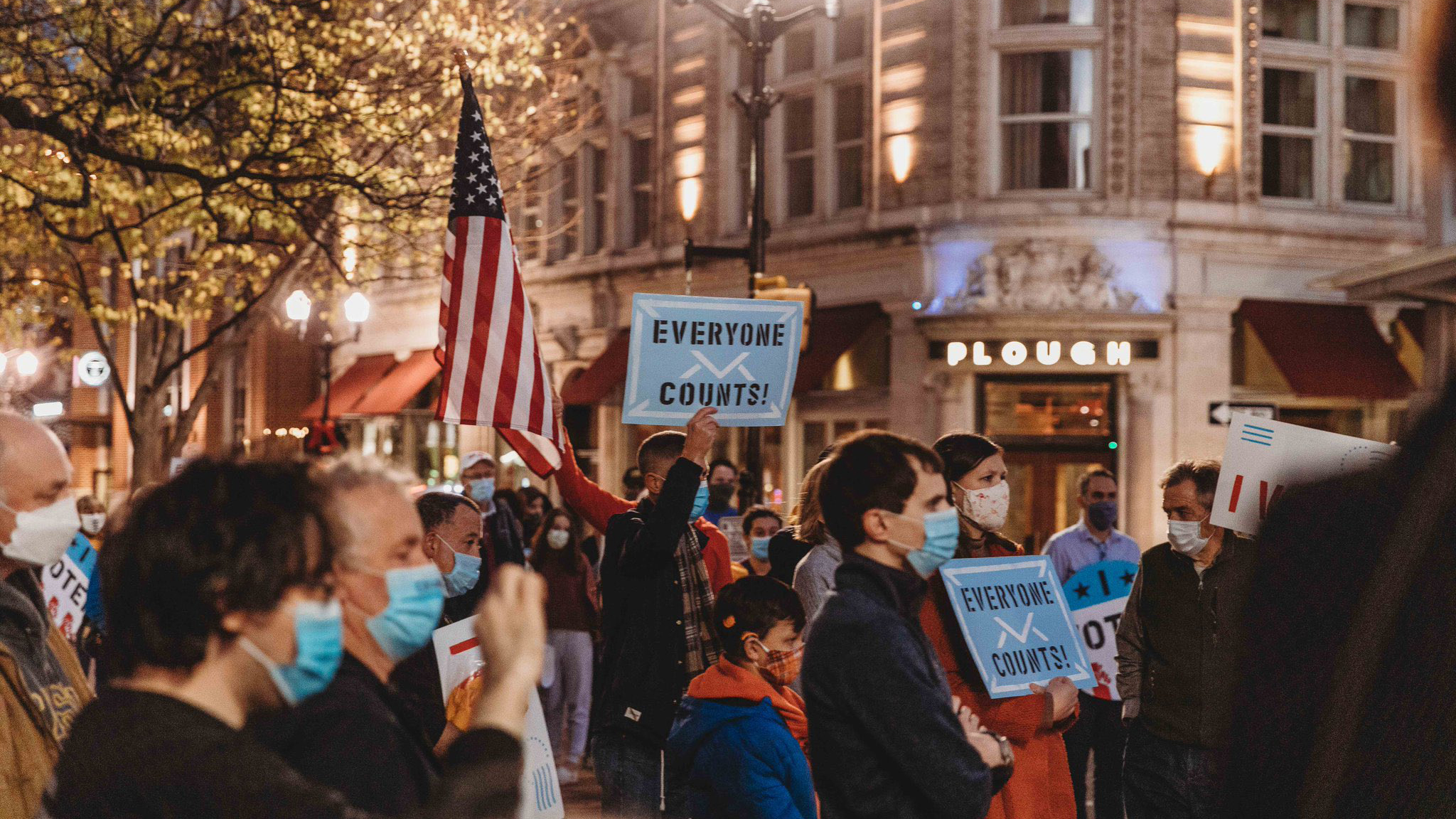 A demonstration organized by progressive groups in the state of Pennsylvania, calling for all votes to be counted. Credit: PA Stands Up/Twitter

The voting in the United States is over and counting is on but president Donald Trump’s campaign of lies and misinformation continues. As Joe Biden inches closer to victory, the president continued to sabotage the democratic process, at one point tweeting that counting be stopped. His supporters also have taken to the streets in many places with an anti-democratic agenda. They are being resisted by progressive forces who have also come out in protest, demanding that every vote be counted.

The president spoke on Thursday, repeating a series of lies that led to many channels cutting his feed. Many of his tweets have already been marked by Twitter as misleading. Among other things, Trump claimed that the election had been rigged and that he had won the States of Wisconsin, Michigan, Pennsylvania and Georgia. As of writing this copy, Wisconsin and Michigan have been called for Biden while he has established a slender lead in Georgia.

As of Wednesday, the Trump campaign also approached courts in the key States of Georgia, Michigan, Nevada and Pennsylvania asking for the counting to be halted. According to reports, the campaign will be seeking a recount in the state of Wisconsin, which all polling companies have declared for Biden. The existing litigation, which include one in the Supreme Court for an intervention in Pennsylvania, seek to challenge existing rules on the counting of late postal ballots. Several States, including the four in question, allow for postal ballots to be counted if they come in within three days after election, provided the mail is dated November 3.

Prompted by unsubstantiated accusations of counting inconsistencies from the Republican camp and the Trump campaign, right-wing protests have cropped up in key States demanding halting of vote counts. Claims of a “stolen election” are being circulated in right-wing and conservative social media circles, which has now spilled onto the streets.

Dozens of pro-Trump demonstrators were arrested overnight in different parts of the US, after attempts were being made to sabotage the counting process. On Thursday night, the police in Philadelphia arrested two armed men hailing from Virginia, who are alleged to have planned an attack on the Philadelphia Convention Center, which is a major counting center in Pennsylvania right now.

Even social media platforms like Facebook and Twitter had to deal with a deluge of misinformation about the results. On Friday, Facebook  blocked a fast-growing pro-Trump group called “Stop the Steal”, which called for “boots on the ground” to prevent the counting from continuing any further.

The increasingly disruptive nature of these protests were met with peaceful counter-demonstrations from activists and progressive groups calling for all votes to be counted. Apart from the battleground States, marches were held on Thursday in cities like New York, Chicago, Philadelphia and Minneapolis, among others. These marches were led by organizations and activists associated with the nationwide Protect the Results campaign.

Please understand: it’s not just our brothers and sisters in Philly demanding #CountEveryVote, it’s Pennsylvanians from small towns, rural areas and suburbs all across the state! #CountEveryVotePA pic.twitter.com/dj58SHLSg4

The results so far

As of November 6, almost all pollsters have called 253-264 of the electoral college votes for Joe Biden, while Donald Trump could only secure 214. A candidate requires 270 of the total 538 votes to win the election. The contest has boiled down to the five States of Arizona, Nevada, Georgia, Pennsylvania and North Carolina. Biden is currently leading in Nevada, Arizona and Georgia while Trump is leading in Pennsylvania and North Carolina. Experts predict Biden may also be able to win Pennsylvania as the bulk of the votes to be counted are absentee ballots in which he has an advantage. Biden will win the election if he wins any two States or the State of Pennsylvania  alone.