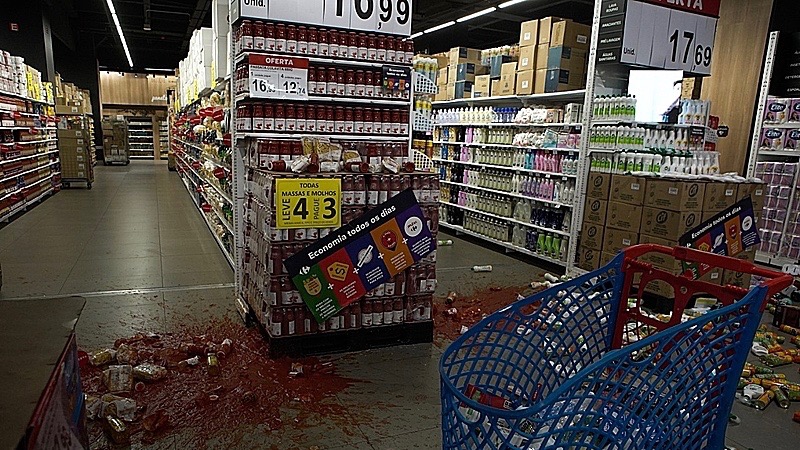 Scenes after a protest against Carrefour in Brazil. In their countries of origin, these companies behave very differently. Photo: Vitor Shimomura

In Brazil, the Carrefour supermarket chain has been adopting racist behavior since 2009. In that year, employees at a unit in the city of Osasco beat up a black man, Januário Alves de Santana. Carrefour’s claim was that Januário was trying to steal a car. Small detail: the car was owned by Januário.

In 2018, Luís Carlos Gomes, a physically disabled black man, was beaten in the bathroom of a Carrefour in the town of São Bernardo do Campo. The offense: opening a can of beer inside the store.

The most recent case occurred this fateful 2020. On the eve of Black Awareness Day, two white security guards beat João Alberto Silveira Freitas, a black man, to death. The accusation: that he argued with and shouted at an employee, in one of the company’s units in Porto Alegre.

This tragic death was bound to happen. Just look at Carrefour’s history. Between the 2009 beating and the 2020 murder, there are 11 years of neglect and a series of other occurrences. For example, the company’s behavior on August 14th, 2020, went down in history. In order not to shutter a store in Recife, the Pernambuco state capital, after an outsourced worker fell dead in the unit’s corridors, Carrefour simply hid the corpse behind half a dozen open umbrellas. And the store continued to function “normally”.

Cases continue to surface. After the repercussion from the murder of João Alberto, Judge Cristina Cordeiro, of the Rio de Janeiro Court of Justice (TJ-RJ), decided to make public another episode involving the French supermarket chain, which occurred somewhere between 2017 and 2018.

A poor, black, lesbian drug user, arrested for allegedly stealing food at a Carrefour branch in Rio de Janeiro, was beaten and raped by supermarket employees.

What should we do? Boycott Carrefour and buy at another supermarket? I am sorry to inform you: there is not much difference.

It would be impractical to detail so many occurrences in this article, but it is possible to present some examples. We will focus on three. These are cases that demonstrate the gravity of the scenario, with regard to transnational corporations operating in the country.

The three largest supermarket chains in Brazil – Carrefour, Pão de Açúcar and Big/Walmart – sell fruits produced through human suffering. Research conducted by this article’s author in 2019, in partnership with Oxfam Brasil, shows that workers who pick fruits for supermarket chains are among the poorest 20% in Brazil. It is a production chain marred by disrespect for female workers, contamination by pesticides and degrading working conditions in several areas of production.

They are the people who produce the fruit we eat, whose dignity is undermined by the predatory behavior of the production chain. More than 75,000 people signed a petition asking supermarkets to take action. You can still sign it too.

The sugar production chain has Coca-Cola as the main financier of soft drink factories and bottlers that are involved in a series of crimes, including torture, death threats, slave labor, invasion of indigenous lands, fraud and land grabbing.

The most recent case is from March 2020. Fisherwoman Maria de Nasareth, a community leader in an area illegally occupied by the Trapiche plant – which has Coca-Cola as its main financial backer – was tortured by police officers working for the plant, while trying to expel them from the protected areas the site occupied.

Coca-Cola is also at the forefront of fiscal maneuvers that lead the soft drink sector to stop paying $3 billion reales in taxes every year. The details of this operation can be found in an article published by this author.

The multinational is involved in overpricing operations related to the price of sugar syrup produced in Amazonas, with the objective of generating illegal tax credits for Coca-Cola bottlers in other regions of the country, according to a survey by the Federal Revenue Service.

Bottling plants linked to the company are some of the country’s main tax evaders. One of them alone has more than R$1 billion reales in unpaid taxes, officially registered in the Federal Active Debt system.

Last month, the company began a gigantic advertising operation aimed at giving the brand an appearance of sustainability. Through a food product called Mucilon, they promised to plant one million trees in the Atlantic Forest. Under the motto “Mucilon: Taking Care of the Planet for Your Child”, the company says that it is a “global sustainability operation”, with the objective of “building an ever better future for everyone and, especially, for our children.”

This is a green-washing operation, as the technique of creating a positive image in order to hide predatory practices, or violations of human rights is known.

Nestlé is the main financier of child labor in Brazil’s chocolate production chain. Research carried out by the author, in partnership with the Public Ministry of Labor and the International Labor Organization, shows that Nestlé, along with four other multinationals, uses the child labor of eight thousand children and adolescents in activities that are harmful to their health, as well as their educational development.

The case has been publicly known since 2019. So far, Nestlé has maintained an eerie silence about the case, which involves not only child labor but also slave labor.

The other companies involved are Mondelez, Barry Callebaut, Cargill and Olam Brasil, who are also sponsors of slave and child labor.

The role of companies

All of them have their headquarters outside Brazil. In their countries of origin, these companies behave very differently.

In Switzerland, where Nestlé is one of the largest companies, child labor is intolerable. Why is it accepted in Nestlé’s operations in Brazil?

In France, Carrefour’s host country, racism is unacceptable inside the company’s stores. Why is it still tolerated in Brazil, at least since 2009, to the point of culminating in a murder?

At the headquarters of Coca-Cola, in the United States, there are no records of links with companies linked to torture and land invasion. Why is this tolerated in Brazil?

Businesses, governments, civil society and consumers have become hostages to their own hypocrisies. Without a union of efforts that put an end to so much condescension, nothing will change.

The example could come from Carrefour, the hot topic at the moment. Maybe closing the store in Porto Alegre forever and funding a center for studies on human rights, responsible public management and healthy consumption would help.

It is necessary to change. This change was needed yesterday. Starting with the government’s stance, which for months has taken on a distinctly neo-fascist vibe, under the complacent eyes of banks, the industrial sector, parliamentarians and large investors. They deserve each other.

This piece was first published in Brasil de Fato.

* Marques Casara is a journalist and researcher specialized in investigating production chains, with a focus on human rights and the environment.

** This is an opinion article. The author’s view does not necessarily express views endorsed by Brasil de Fato.