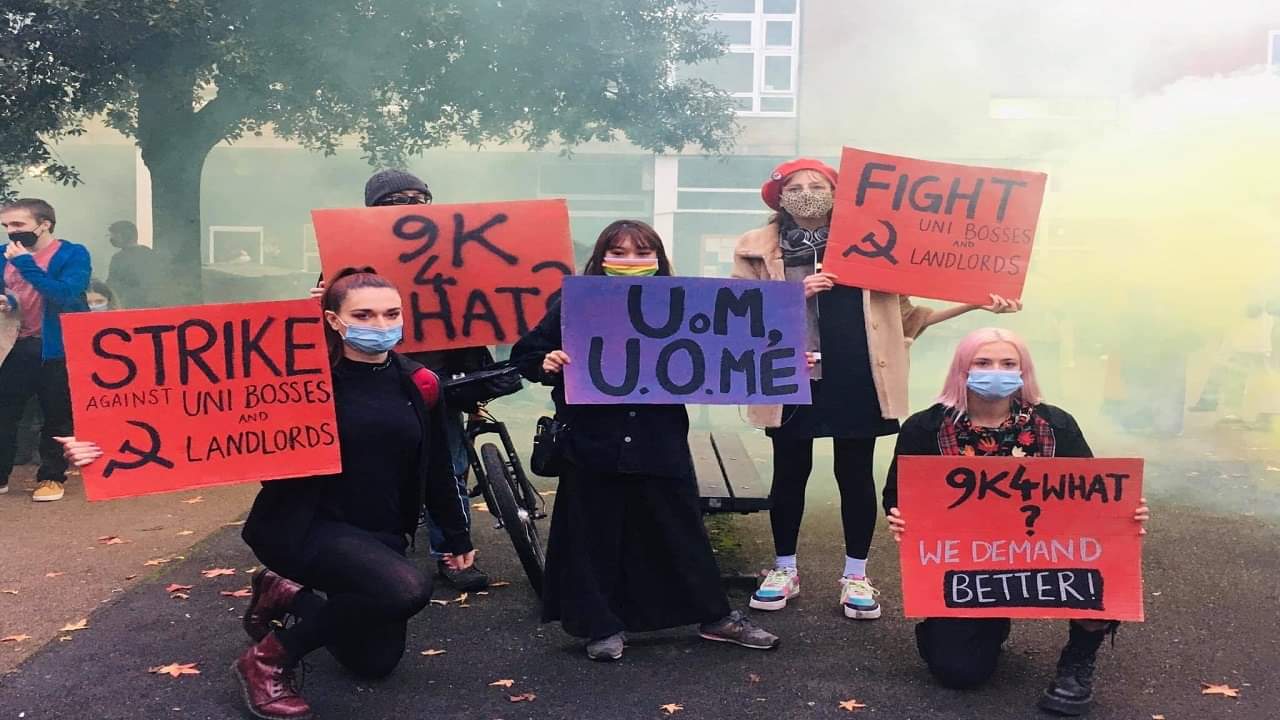 The student community has been severely affected by the COVID-19 crisis in the UK, as the country is witnessing yet another spike in the number of cases. Lack of concrete actions by the Tory government and the universities to provide relief had led to protests across the country by students. Some of the issues raised by various student and youth groups, including students of the University of Manchester (UoM), are the precarious conditions in universities, higher tuition fees and rent, and insensitive lockdown measures imposed by the authorities.

Peoples Dispatch (PD) talked to Jude Percival, press officer for the 9K 4 WHAT? group, which is campaigning against higher tuition fees being charged by universities across the UK during the COVID-19 crisis.

Peoples Dispatch(PD): What are the objectives of your campaign and the origins of your movement?

Jude Percival(JP): 9K4WHAT? is a loose national group dedicated to fighting for better conditions for students during the COVID-19 crisis. The 9K4WHAT? campaign in Manchester was originally a response to these conditions – crammed into overpriced university halls, often far from the support of home, with the unfulfilled promises of a university experience which would have at least some face-to-face teaching. Students at the University of Manchester and across the country have gotten £9,250 into debt for an education that is entirely online; having been encouraged to rent accommodation on campus only to find themselves isolated.

The recent scenes at the University of Manchester illustrate the mistreatment of students during the pandemic by the upper management of universities. Just last month (November), the university erected fences around the accommodation on campus to police the students. This came at a time when students were already feeling isolated and vulnerable in halls during the height of a global pandemic. This resulted in the students organizing an ad hoc protest and tearing the fences down.

The immediate objectives of 9K4WHAT? are as follows: a reduction in tuition fees so that they are in line with those of the Open University; protection of BAME students and staff; improved availability of mental health support; better maintenance of the student halls; no staff redundancies or cuts over the compensation of students.

PD: What has been the condition of students in the UK during the COVID-19 crisis?

JP: Students across the UK have been one of the groups that has borne the brunt of the pandemic. The COVID-19 crisis has brought out the contradictions of the marketization of universities in Britain, which has seen students being primarily treated as a source of profit by university managements.

PD: Can you elaborate a bit on your mobilization for the University of Manchester rent strike and the impact of its success?

JP: Due to the particularly poor handling of the pandemic by the University of Manchester, students have taken significant action to draw attention to the conditions they face. As 9K4WHAT?, we have been supporting the actions of the University of Manchester (UoM) Rent Strike campaign, as well as helping provide a platform for students to demand better treatment during the pandemic.

Students at the university began the UoM Rent Strike campaign demanding a 40% reduction in rent for the full academic year. The university bypassed the students and the Rent Strike campaign to talk to the student representatives in the Student Union. They originally agreed to a 5% reduction in rent for the whole year, which of course the Rent strike campaign rejected opting to instead continue the strike. The university eventually agreed to a 30% reduction for the first semester. As of right now, UoM Rent Strike has a January rent strike planned to push for the original demand of a 40% reduction across the whole year. Our most recent action was a march (which you can see on our social media) with other student-led organizations protesting the marketization of universities, the situation in Manchester, and demanding a reduction in tuition fees.

PD: With students across the UK experiencing a crisis, what are your proposals to tackle the situation?

JP: We believe that the aforementioned demands will ease the situations that many students face. However, we identify the root cause as the marketization of higher education, and in order to truly tackle the situation students face an abolition in tuition fees and restructuring of universities in the UK would be necessary.