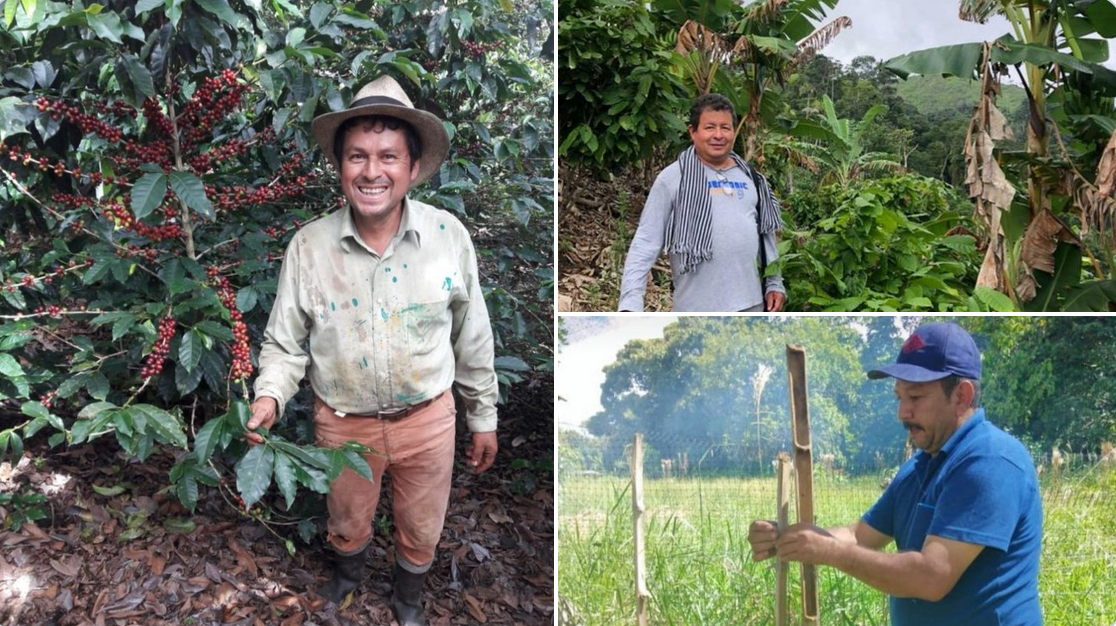 Robert Daza, Teófilo Acuña and Adelso Gallo are leaders from CNA, CdP and the Agrarian, Peasant, Ethnic and Popular Summit

Colombian peasant organizations and social movements celebrated the decision of a supervisory judge on Monday, December 21 to not hold three peasant leaders – Teófilo Acuña, Adelso Gallo and Robert Daza – in pre-trial detention. The three leaders from the peasant organization Coordinador Nacional Agrario, the People’s Congress (Congreso de los Pueblos) and the Agrarian, Peasant, Ethnic and Popular Summit were arrested on December 15 and 16, and accused by the Attorney General of being part of an armed guerrilla group.

The accusations were rejected and condemned by organizations in their regions, at a national level and internationally. Activists pointed out that the three are community leaders who have dedicated their public life to fight for the rights of peasant communities and in defense of land. A number of press conferences, rallies, mística ceremonies, and social media campaigns were held by the organizations in order to highlight the work they do as peasant leaders and human rights defenders, and insist on their innocence.

This was clearly reflected in the decision by the judge who decided that they should not be held in pre-trial detention because this “would not only affect the right to freedom of them as individuals, but also it would generate an impact on the communities that they represent.” The judge also called on authorities to investigate actions carried out by the police during the arrest that were denounced by the legal defense teams of the three leaders.

Following the decision, Teófilo, Robert and Adelso signed documents committing to periodic appearances before the judge throughout the course of the investigation. They were subsequently released from detention and greeted by members of their families, communities and organizations.

Upon release, Robert Daza sent a message to those who supported him from Colombia and across the world: “We continue in this struggle, without fear, without apprehension and I call on all people and organizations to not be intimidated by these actions and instead we should continue working with the principles and goals that we have as social organizations.”

Adelso Gallo also made a statement following his release highlighting the important factors that led the judge to take this decision: “One is doing things properly, convinced that the struggle continues and that the defense of the people is the correct way forward and that we must not hide. The second is that, when you have the support of the people, in this case and in this moment the people mobilized; the social organizations recognized the humble contributions to this work that we have made and it was definitive in the decision of the judge. The third factor was that there was a decision made by an independent judge who seems to not make decisions based on what the economy of the country demands.”

In a press conference given on Tuesday December 22, Teófilo Acuña denounced that the role of the Attorney General in Colombia has been to criminalize and terrorize the social movement. He points out that their arrests “were not just an attack on Teófilo, Robert, and Adelso but against the whole social movement, and the social leaders and human rights defenders of the whole country.”

He added that “all of this persecution from the Attorney General is because we have denounced all of the violations committed against us in our communities, and we have not received responses but persecution. This is because we have opposed mega-mining projects, fracking and other projects in our territories, and we fight to recover the land for projects of life. I think that this is our crime, and that is why the prosecution was unable to prove anything beyond this being a complete frame-up.”

In the press conference, Peoples Dispatch asked the attorney of Robert Daza, human rights defender Jorge Reales, about what the decision made by the judge means in the context of increased persecution on social leaders and human rights defenders in Colombia. Reales commented, “Without a doubt, this decision by the judge constitutes an important contribution in the political struggle and the legal battle. The judge overseeing the case said that the work of those accused seeks to bring well-being to the communities. She affirmed that it is work organized in an autonomous way, which is to say planned and defined not by any external group, insurgent or otherwise, but that it is the product of deliberations and discussions by the communities within their legitimate and autonomous organizations.” He highlighted that the decision made it clear that “social leadership must not ever be subject to persecution.”

With regards to the future of the case, he stated that “We believe and are completely certain that the accusations made by the Attorney General will never be proved by the prosecution, because as was already indicated, the work of social leaders in Colombia is a product of the decisions taken autonomously within organizations. With this argument and with the evidence that we will present from here on out, we will show that the case of three leaders is a ‘frame-up’.”

For Reales, this indicates “that the Attorney General … carries out the policies of this genocidal government, a government of the bourgeoisie that works to favor this class. The Attorney General spearheads the government’s strategy of dismantling the social movement through preventative detention, through incarceration, and through psychological torture caused to our leaders through the dramatic act of detention.”

The campaign, ‘To be a social leader is not a crime’ (Ser líder social no es delito), which was launched by the People’s Congress three years ago, released a press statement celebrating the decision and classified it as “a victory of the entire social and citizen movement that worked to demonstrate the unjust nature of these arrests, categorized as ‘frame-ups’.”

However, the organization warned that “the battle is not over yet” and the “persecution, criminalization and legal accusations of people in Colombia that are committed to defending the territories and life is the strategy of the State to stop the struggles of the social movement. This along with the systematic assassinations of social leaders, constitutes today a the new form of political genocide of the Colombian right against the people,” the statement said.

According to a 2020 report by the Institute of Development and Peace Studies, more than 1,090 social leaders and activists have been killed in Colombia since 2016. 63% of these deaths occurred under the right wing government of President Iván Duque.