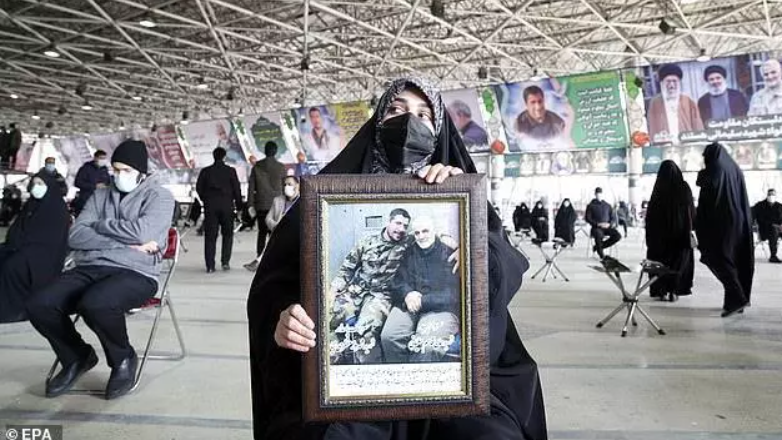 Scene from a ceremony marking the first anniversary of the assassination of General Qassem Soleimani, Tehran, Dec 31, 2020

On the first anniversary of the killing of the leader of Iran’s elite Quds Force, Gen. Qasem Soleimani, in a targeted drone strike on January 3, 2020 that was approved by President Donald Trump, something was bound to happen. Tehran has regularly insisted that the killing has not yet been avenged.

And US officials have been especially nervous lately. The US flew strategic bombers over the Persian Gulf twice in December, in a show of force meant to deter Iran from attacking American or allied targets in the Middle East.

A senior US military official confirmed that the second flight last Wednesday by two Air Force B-52 ‘Stratofortress’ bombers was in response to signals that Iran may be planning attacks against US-allied targets in Iraq or elsewhere in the region in the coming days. He claimed that US intelligence detected recent signs of “fairly substantive threats” from Iran.

However, it seems the US has been barking up the wrong tree. The Iranian officials have repeatedly stated in the recent days that Tehran did not intend to start a war, but has the capability to hit back hard if attacked.

Indeed, a far more ominous development is unfolding. The International Atomic Energy Agency (IAEA) disclosed in a statement in Vienna on Friday, “Iran has informed the Agency that in order to comply with a legal act recently passed by the country’s parliament, the Atomic Energy Organization of Iran intends to produce low-enriched uranium up to 20 percent at the Fordow Fuel Enrichment Plant.” The statement noted that the communication from Iran dated December 31 “did not say when this enrichment activity would take place”.

In effect, Tehran has notified that it plans to enrich uranium to up to 20% purity, a level it had previously achieved before the 2015 accord, at its Fordow site. This step was one of many mentioned in a law passed by Iran’s parliament last month in response to the killing of the country’s top nuclear scientist, which Tehran has blamed on Israel.

The 2015 deal does not allow enrichment at Fordow, which is buried inside a mountain apparently to protect it from aerial bombardment. Iran has so far only gone up to 4.5% purity in enrichment, well short of the 20% it had achieved before the 2015 deal.

Make no mistake, this is a perfect storm. Strictly speaking, Iran only plans to exercise a right under the provisions of the 2015 deal to react to circumstances when one of the signatories of the JCPOA — in this case, Washington — has failed to fulfill its obligations. Second, Tehran has notified its plans, but its nuclear chief Ali Akbar Salehi clarified on Saturday that the necessary orders by President Hassan Rouhani to take the required steps are still awaited.

Third, as and when the presidential directives are available, Iran plans to change the uranium gas capsule accordingly, under the IAEA supervision. Salehi described his team of scientists as “soldiers of the Islamic system”.

In sum, a grave situation is potentially in the making, for sure, in a near future. The 2015 deal is being steadily eroded and the mindless killing of Iran’s nuclear scientist by Israel has opened the pathway for Tehran to roll back the “breakout time” to produce enough fissile material for a bomb — if it decided to make one — to about two to three months from at least a year.

The IAEA’s assessment until now has been that Iran was not moving ahead with its nuclear work as fast as it could. But that may be changing now.

However, while Iran has contravened many of the 2015 deal’s restrictions, it is still cooperating with the IAEA and granting inspectors access under one of the most intrusive nuclear verification regimes imposed on any nation.

The 2015 deal bans enrichment at Fordow, a site Iran secretly built inside a mountain, where centrifuges are allowed only for purposes like producing stable isotopes; whereas, Iran now has 1,044 IR-1 centrifuges enriching there. The “known unknown” here is that stockpiling enough fissile material is widely seen as the biggest hurdle in producing a weapon. Clearly, an untenable situation is potentially arising.

But Iran has warned a “crushing response” to any attack by the US or Israel. The Iranian Foreign Ministry Spokesman Saeed Khatibzadeh stated yesterday, “The regime in Jerusalem is well aware that if anyone approaches Iran’s red lines, Iran’s response will be crushing. We neither compromise nor reconcile on national security, security and national interests of Iran.”

“But in the case of the US moves, we see certain mischief and signs that the movements are mischievous. We have said directly and without any concealment that the US should account for the consequences of any adventurism. We are certainly not looking for tension, but at the same time, we are quite serious about defending our interests.”

Khatibzadeh stressed that Tehran also warned the regional states to take care not to be coaxed into involvement in “the plots and mischievous acts” against Iran.

Indeed, the Pentagon is not taking chances. On Thursday, the day after the second flight by the B52 bomber, Pentagon decided to return home the USS Nimitz, the Naval aircraft carrier deployed to the Persian Gulf.

With 17 days to go before vacating the White House, Trump will suffer a huge loss of face if he does nothing. But if he resorts to act of war without Congressional approval, it will be not only sedition, but would potentially have horrific consequences in American lives, apart from causing destruction of Israel and the US’ allies in the Persian Gulf.

As a senior military advisor to Iran’s Supreme Leader and former defense minister Hossein Dehqan put it, “Americans are on standby for fear of (Iran’s) revenge, and have flown two B-52 bombers over the Persian Gulf for show. All their military bases in the region are within the range of our missiles.” Trump’s much-touted “maximum pressure” against Iran has boomeranged.