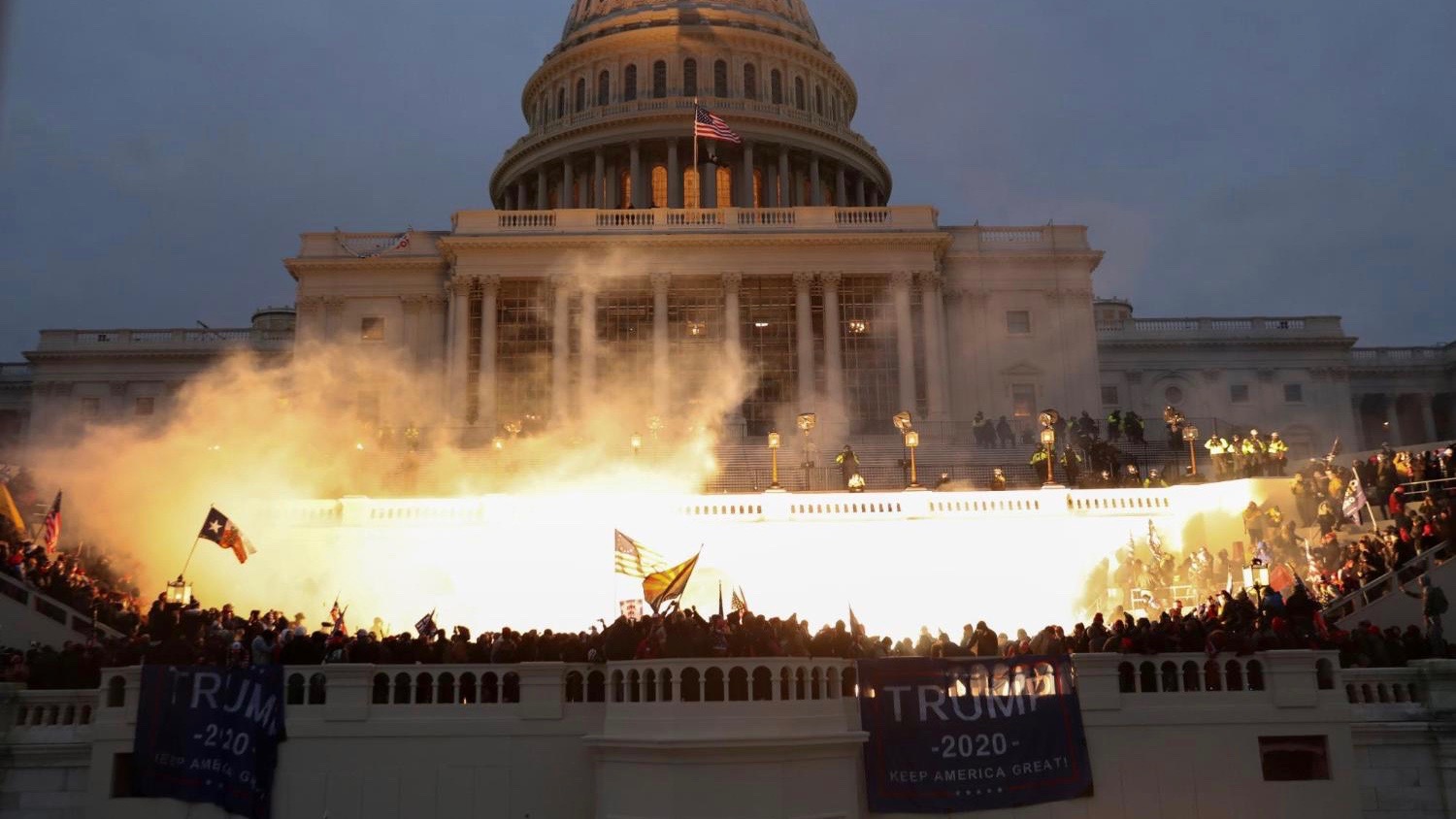 Right-wing rioters had taken over the Capitol building, that houses the US Congress, for a few hours disrupting the ceremonial count of the electoral college votes. Photo: Twitter

After a riot and hours of debate, the United States Congress finally certified the electoral college votes for the president, declaring Joe Biden as the winner. The vote count was resumed late in the night of Wednesday, January 6, and ended early morning on Thursday. The counting was resumed after a mob of supporters of president Donald Trump stormed the Capitol building, the seat of the Congress, disrupting the proceedings and forcing the legislators to evacuate the chambers.

Even though the counting of electoral college votes is a largely ceremonial process, it is mandated by the US constitution to certify the winner of the presidential election held on November 3. Usually, the process takes less than an hour to complete and has little scope to change the results certified by the authorities of each state and the capital, Washington DC.

However this time, pro-Trump legislators from the Republican Party, led by senator Ted Cruz, filed objections to the results from Arizona and Pennsylvania. Before the violence erupted in the Capitol building, more than a dozen Republican senators had taken the position to file objections against votes of key battleground states. After the rioting, over half of these senators backed out.

Trump received a lot of support from his party in the House of Representatives, with nearly two-thirds of House Republicans voting in favor of the two objections that went to vote. Despite the stalling tactics of the Republican legislators, the Congress eventually finished the ceremonial counting and certified Joe Biden’s and Kamala Harris’ status as the president and vice-president elect.

Spiral of violence, deepening of crisis

Meanwhile, social movements in the United States and foreign governments strongly condemned the violence on Wednesday by Trump supporters while pointing out aspects that liberal commentators have been ignoring. The Party for Socialism and Liberation, a leftist party that also participated in the November 3 elections, for instance pointed to the inaction of armed federal troops in the capital.

“What really must happen is that all those responsible for today’s historic act of fascist aggression be brought to justice,” read the PSL statement. “This especially includes Donald Trump, and those in the military and police hierarchy who used their positions to facilitate today’s events.”

The statement added that the there was a very clear evidence of collusion between, what is described as a “fascist mob”, and elements within the US Department of Defense under Trump, and that the “menace of the far right can only be decisively defeated by a militant, united front of the multinational working class.”

Venezuela, a nation that is suffering from unilateral sanctions by the US and where the US backed an abortive right-wing coup attempt, has also condemned the “polarization” and the “spiral of violence” that was witnessed yesterday.

The government of the Bolivarian Republic issued a statement where it was argued that the violence is only a reflection of the deep crisis in the US. “With this unfortunate episode, the United States is experiencing what it has generated in other countries with its policies of aggression. Venezuela hopes that the acts of violence cease soon, and that the people of the US can finally open a new path towards stability and social justice,” read the statement.

The General Secretariat of the Organization of American States was quick to respond, stating that the “exercise of force and vandalism against the institutions constitutes a serious attack against democratic functioning.” Many observers pointed out that such words of condemnation were missing from the OAS when similar “vandalism against institutions” took place during the coup against Bolivian president Evo Morales in 2019.

Leaders of the Democratic Party, which was particularly targeted by Trump yesterday, did not hold back on their criticisms against the Republican legislators supporting Trump and the violence. Ilhan Omar, a progressive Congresswoman, announced that she was drawing up an impeachment motion against Trump. “Today, I watched as armed terrorists stormed the United States Capitol. We should not mince words about what this was: a coup attempt,” stated Omar.

The call to impeach the president less than two weeks away from the end of his term, received support from other progressive Democrats, including Alexandria Ocasio-Cortez and Ayana Presley.

Ocasio-Cortez who was calling for Trump’s removal from office evidence of his attempts to undermine results in Georgia state was revealed, seconded Omar’s call with a tweet that just read “Impeach”. She also tabled for a resolution to investigate the role of pro-Trump legislators in the Congress, like Ted Cruz, who have been leading the attempt to overturn the results during the counting.

Trump backed down after the certification was completed and promised an “orderly” transition to a Biden presidency. However, his role in instigating the riot is crystal clear, as is the role of many in the Republican Party and right-wing media.

Trump’s desperate attempts and failure to overturn the election results in certain states, to pressure his vice-president Mike Pence to overturn the election count, and his recent tweets calling for people to attend a massive protest in Washington DC, are just among the examples of this trend. Three rallies were given permits to be held at the Washington Monument, right outside the White House and the Capitol.

This was done despite his explicit knowledge of the groups organizing it, which included the Proud Boys, a widely recognized hate group. Just minutes before the violence on the Capitol, Trump and his family addressed the crowd assembled outside the White House for the “Stop the Steal” rally, and insisted that he will “never concede.” Trump also reiterated his accusations of the election being “stolen” by the Democratic Party, in his address to a massive crowd that had tens of thousands from across the country.

The late deployment of armed National Guard troops to assist the DC police in evacuating the Congress of rioters and maintaining peace, also was indicative of Trump’s support for the violence.

Federal troops that were deployed in preparation of the protests, at the request of the local government, were unarmed and were done only for “crowd management”. Very little restrictions and checks were placed on the incoming deluge of Trump supporters.

On the day of the violence, PSL’s statement observed that the “heavily armed Capitol Police put up almost no resistance as the fascists pushed over barriers, smashed windows and invaded the chamber of the Senate.”

The statement noted that if “an action remotely like the pro-Trump mob’s dispersal of Congress had been attempted by anti-racist protesters this summer, for instance, they would have undoubtedly been met with deadly and overwhelming force.”

When the Capitol was finally emptied, the violent mob was escorted out by law enforcement with little to no force. Throughout the day, at least 14 law enforcement personnel were injured and once the protesters were dispersed from the Capitol, explosive devices were discovered in several key places, including buildings housing the national conventions of the two parties.

Many comparisons were made to the violent and brutal crackdown on anti-racist protesters across the Washington DC on June 1, last year, to make clear the way for a photo-op for Trump, or the countless other violent police crackdowns on peaceful sit-ins and protests outside the building.