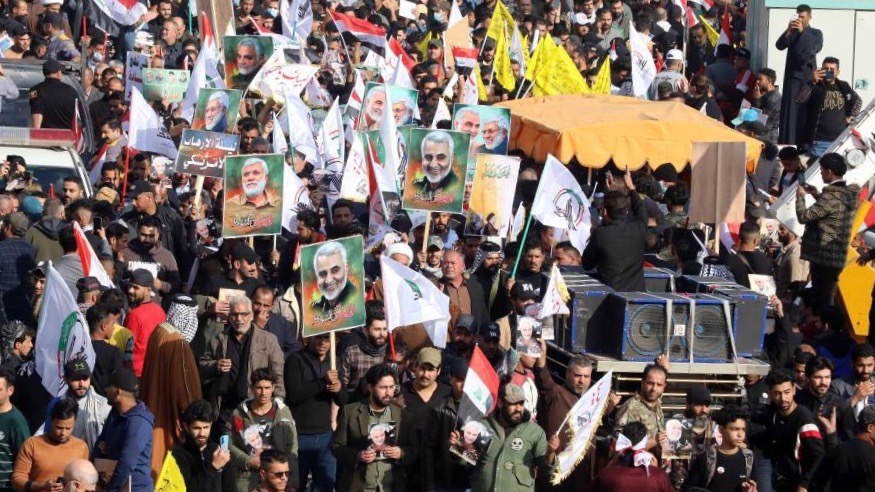 Iraqis observe anniversary of the assassinations of Abu Mahdi al-Muhandis and Qaseem Soleimani in Baghdad on January 3, 2021. (Photo: www.news.cn)

An Iraqi court issued an arrest warrant against US president Donald Trump on Thursday, January 7, in a case related to last year’s killing of Abu Mahdi al-Muhandis, deputy commander of the Iraqi militia Popular Mobilization Force (Hashd al-Shaabi). The Baghdad court issued the warrant under article 406 of the Iraqi penal code which is related to premeditated murder and provides for the death penalty.

Al-Muhandis was killed in a drone attack near the Baghdad airport on January 3 last year along with nine other persons, including top Iranian commander General Qassem Soleimani of the Islamic Revolutionary Guards Corps.

Trump had later taken credit for the attack and boasted saying that the US got “two for the price of one.”

The arrest warrant against Trump comes after al-Muhandis’ family members filed a case in Baghdad’s Rusafa investigation court and recorded their statements. The court said in a statement that the warrant was issued after completion of the preliminary investigation. It also said that further investigation is on to identify other culprits.

Iraq had termed the assassination of Soleimani and Muhandis inside its territories by the US a violation of its sovereignty. The Iraqi parliament also passed a resolution demanding that all foreign troops leave the country following the assassination.

Iraq is now the second country after Iran to issue a warrant against Trump. On January 6, Iran asked the Interpol to issue a red notice to other police forces in the world for the arrest of Trump and 47 others in the case related to the killing of Soleimani. As per latest reports, Interpol has not met the Iranian request yet.

Iran claims that it has identified others accused in the case, which include top officials in the Pentagon and the US armed forces. Iran started a legal process against them on January 6.

Soleimani and al-Muhandis were widely respected in both Iran and Iraq due to their successful missions against the terrorist group Islamic State or ISIS. On the anniversary of their assassination last Sunday, thousands of people in both the countries came out on the streets to pay their respects and demand justice.

Iranian judiciary chief Ebrahim Raisi had said in a television broadcast on January 6å that Iran will pursue the case against Trump seriously, whether he remains the president or not, Iranian PressTv reported.

Following the assassinations of Soleimani and al-Muhandis, Iran launched a barrage of missiles on one of the Iraqi bases hosting American troops on January 8 last year. It also warned all foreign troops to leave the region immediately.