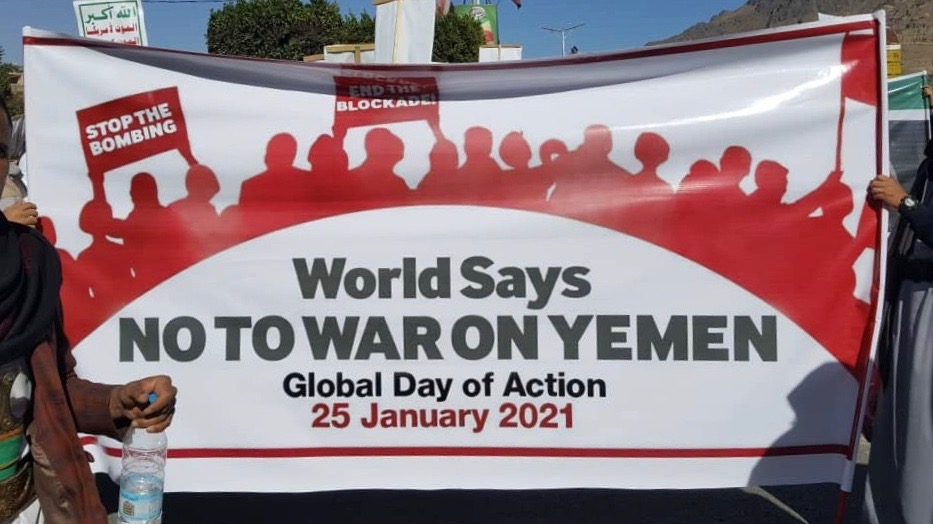 Scores of anti-war and human rights organizations and individuals from across the US issued a joint letter on Thursday, February 11 demanding the US government to cancel arms sales to Saudi Arabia and the UAE. They also demanded an impartial enquiry into the human rights violations by the parties of the Yemen war. The letter was issued on the day when members of the European Parliament voted in favor of a resolution asking its members to do the same.

More than 90% of the @Europarl_EN called today for a halt of all EU of arms sales to Saudi Arabia and UAE, targeted sanctions against the officials involved in the war in Yemen and referral of the war crimes to the ICC. Only the extreme right opposed. https://t.co/e52xUBIxZR

The letter appreciated president Joe Biden’s announcement last week about ending US support to the Saudi coalition’s war efforts in Yemen and halting “relevant” arms sales. However, it criticized Biden’s insistence that the US will continue to support Saudi Arabia’s defense activities. The letter argues that “curtailing U.S. military support should not be limited to arbitrary definitions of what equipment and services are “offensive” or “defensive,” but instead should be guided by these countries’ past behavior as required by U.S. and international law, within their borders and in the wider region, particularly regarding respect for human rights and civilian harm.”

Highlighting that Saudi Arabia and the UAE have a long history of human rights violations both domestically and internationally in Yemen, Libya, and elsewhere, the letter demands a thorough and independent investigation. It also notes that the countries have used US weapons in attacking civilian installations such as schools and hospitals in Yemen.

New from @JackDetsch & @RobbieGramer in @ForeignPolicy: “Pressure Mounts on Biden to Cancel Billions More in Arms Sales to Saudi Arabia.”

The letter specifically identifies weapons sales deals worth USD 36 billion, claiming their illegal use by the Saudis and the UAE. It asks the Biden administration to “permanently cancel” such transactions.

The letter also assures support for any plans undertaken by the Biden administration to end the “blank cheque of impunity that Saudi Arabia and the UAE have enjoyed” in Washington.  The signatories of the letter include the Project on Middle East Democracy (POMED), CODEPINK and SIPRI, among others.

Similar campaigns have also been initiated by different organizations in the UK. The UK is one of the largest arms suppliers to Saudi Arabia and the UAE. Organizations such as Stop the War Coalition and Campaign Against Arms Trade (CAAT) have written to British parliamentarians demanding a resolution against the arms sales to Saudi Arabia and the UAE.

Joe Biden’s end to US support for the war on #Yemen and suspension of arms sales to Saudi Arabia is a welcome change to US foreign policy.

Shamefully, the British government continues to support the war. We must force a u-turn.

Write to your MP now…https://t.co/t9t91mQZBH