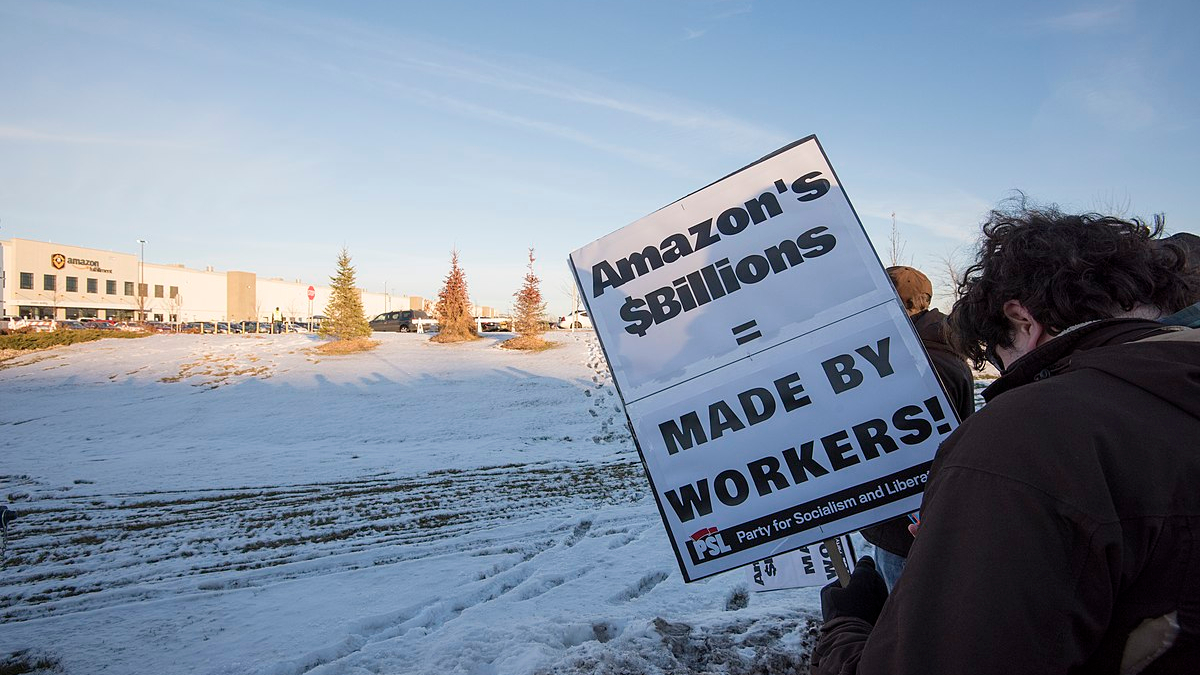 Thousands of warehouse workers at an Amazon plant in Bessemer, Alabama, are at the center of a potentially game-changing union vote taking place right now. On February 8, the warehouse workers were sent ballots by mail to decide over the next seven weeks if they want to join the Retail, Wholesale and Department Store Union (RWDSU). Just getting to this point was a major victory considering the aggressive union busting by the world’s largest retailer and the fact that employees are working during a pandemic. If workers vote affirmatively, they would have the first unionized Amazon workplace in the United States.

Stuart Appelbaum, the president of the RWDSU, described to me in an interview the shocking details of what he calls “the most aggressive anti-union effort I’ve ever seen,” aimed at the 5,800-strong workforce. “They are doing everything they possibly can,” he said. The company has been “bombarding people with propaganda throughout the warehouse. There are signs and banners and posters everywhere, even in the bathroom stalls.”

According to Appelbaum, the company is also texting its workers throughout the course of the day urging a “no” vote and pulling people into “captive-audience” meetings. Unsurprisingly, Amazon is resorting to the most commonly told lie about unions: that it will cost workers more money to be in a union than not. One poster pasted on the wall of the warehouse claims, “you already know the union would charge you almost $500 a year in dues.” But Alabama is a “right-to-work” state where workers cannot be compelled to join a union if they are hired into a union shop, nor can they be required to pay dues.

Complementing its heavy-handed in-person union-busting efforts is a slick website that the company created, DoItWithoutDues.com, where photos of happy workers giving thumbs-up signs create a veneer of contentment at the company. On its site, Amazon innocently offers its version of “facts” about a union that include scare-mongering reminders of how joining a union would give no guarantee of job security or better wages and benefits—with no mention of how Amazon certainly does not guarantee those things either.

On the company’s own list of “Global Human Rights Principles,” Amazon states, “We respect freedom of association and our employees’ right to join, form, or not to join a labor union or other lawful organization of their own selection, without fear of reprisal, intimidation, or harassment.”

But in a page out of Donald Trump and the Republicans’ playbook, the company tried to insist that even in the middle of a deadly pandemic, the union vote must be “conducted manually, in-person, making it easy for associates to verify and cast their vote in close proximity to their workplace.” The National Labor Relations Board rejected Amazon’s appeal for a one-day physical election.

Ballots were mailed out to workers on February 8, and the union and its advocates are shrewdly using the seven-week-long voting period to campaign and encourage workers to vote “yes.” But Amazon is also continuing its efforts at countering the RWDSU. Organizers in Bessemer had taken to engaging the workers while they stopped at a red light upon leaving the Amazon warehouse. But the company, according to Appelbaum, “had the city change the traffic light so our organizers wouldn’t be able to speak to them.” (A statement from Bessemer city denies the claim.)

So aggressive are Amazon’s anti-union tactics that 50 members of Congress sent the company a warning letter saying, “We ask that you stop these strong-arm tactics immediately and allow your employees freely to exercise their right to organize a union.” Even the company’s own investors are so shocked by the tactics that more than 70 of them signed on to a letter urging Amazon to remain “neutral” in the vote.

The path to this union vote was paved by staggeringly high inequality that worsened during the pandemic as workers were stripped of their insultingly low hazard-bonus of $2 an hour while the company reaped massive gains over the past year. CEO and soon-to-be “Executive Chair” of Amazon, Jeff Bezos is the world’s second-richest man. He is now worth a mind-boggling $188 billion and saw his wealth increase by $75 billion, over the past year alone—the same time period that about 20,000 of his workers tested positive for the coronavirus.

Bezos’ announcement that he was moving into a new role at the company came on the same day that the Federal Trade Commission announced Amazon had stolen nearly $62 million in tips from drivers working for its “Flex” program. Appelbaum speculated that “what Bezos was trying to do was to create a distraction just like Trump would do,” and that “instead of focusing on the $62 million they stole from their drivers, people would talk about the fact that Bezos was getting a new title.”

Appelbaum sees the historic union vote in Bessemer as more than just a labor struggle. “Eighty-five percent of the people who work at the facility are African American. We see this being as much a civil rights struggle as a labor struggle,” he said. Indeed, conditions at the warehouse are so shocking that they sound like a modern-day, technologically enabled incarnation of slavery. “People were being dehumanized and mistreated by Amazon,” said the union president. He explained, “people get their assignments from a robot, they’re disciplined by an app on their phone, and they’re fired by text message. Every motion they make is being surveilled.”

Union advocates are countering Amazon’s combative anti-union efforts with their own information war. In addition to organizers talking to the warehouse workers in Bessemer every chance they get, an informational website Bamazonunion.org shares data from various studies about the dangerous working conditions in Amazon facilities. The site reminds workers that unions are able to win contracts where workers can only be fired for “just cause” and not on the whim of managers; that complaints against the company can be filed via formal grievances; and that wages and benefits are negotiated collectively.

As a proud union member of SAG-AFTRA, my colleagues and I at KPFK Pacifica Radio have benefited regularly from such protections even against a small nonprofit public radio station struggling to make ends meet. When faced with a ruthless for-profit corporation that has built its empire on the backs of a nonunionized workforce, Amazon’s workers are on the front lines of those who most need the protections a union can provide.

“This election is the most important union election in many, many years because it’s not just about this one Amazon facility in Alabama,” said Appelbaum. “This election is really about the future of work, what the world is going to look like going forward. Amazon is transforming industry after industry, and they’re also transforming the nature of work,” he said. Indeed, the level to which Amazon has fought against unionization at just one warehouse in Alabama is an indication of how important it is to the company that its workers remain powerless.