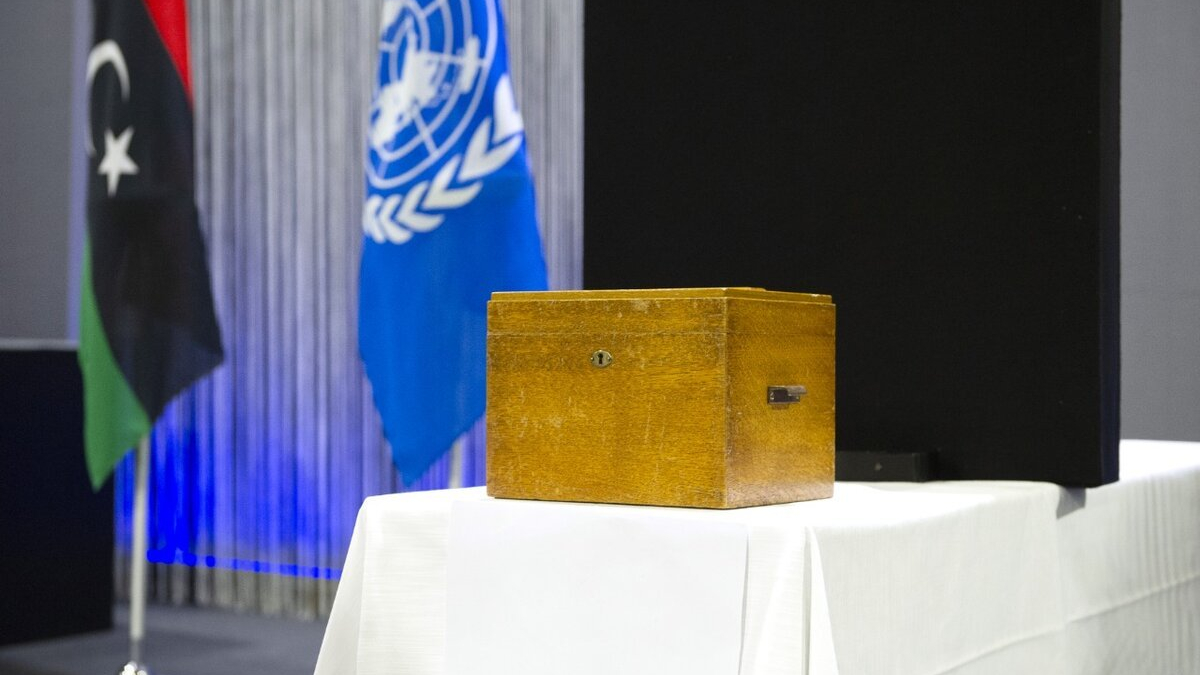 Election of Libya’s transitional government in Geneva on February 5. Photo : UNSMIL via Twitter

Hopes for the end of almost a decade of war in Libya have revived following the United Nations-backed Libyan Political Dialogue Forum’s (LPDF) election of a transitional government with the mandate to oversee the elections in December. The 75-member Forum met in Geneva and after two rounds, was able to finally elect an interim prime minister and a three-member presidential council. Though all the warring factions in the country have supported the new interim government, peace in Libya is still elusive because of some uncertainties, including the presence of foreign troops in the country.

Mohamed Younes al-Menfi was elected as the head of the interim presidential council. In the elections based on the list system, Abdul Hamid Dbeibah, a businessman from Misrata, was elected as the prime minister. His two deputies are Musa al-Koni and Abdullah al-Lafi. They defeated a list made of outgoing interior minister in the Government of National Accords (GNA), Fathi Bashagha, as prime minister and speaker of the parliament in Tobruk, Aguila Saleh, as head of the presidential council.

Saleh, the frontrunner for the president’s post, had the backing of Khalifa Haftar. Saleh had backed the appointment of Haftar as the head of the Libyan National Army which was fighting against the GNA forces. Mohamed al-Menfi, also from Tobruk, however, is considered to be a critic of Haftar.

The new interim prime minister has three weeks to present his government for approval in the parliament. Once approved, the interim government will oversee the affairs of the country and elections scheduled for December 24. The election of the interim government means that all rival administrations, including the Government of National Accord, will be dissolved.

The winning list has promised not to contest in the December elections which means that those who have lost can still contest the national elections making them stakeholders in the success of the peace process. The winning list in the interim government has also promised to appoint women in at least 30% of the senior posts.

Stephanie Williams, the outgoing head of the UNSMIL and UN’s special representative in Libya, and secretary general Antonio Guterres welcomed the development and called it a “historic moment” and a “breakthrough.” The virtual absence of expression of hostilities by the defeated parties and support of foreign powers to the peace process gives confidence in the sustainability of the move.

The successful culmination of the election of the transitional government was the result of a long process. The UN-led dialogues in August last year came after numerous failed attempts. The uncertainties have gradually been overcome with the formation of LPDF in September in Tunisia and with the signing of a permanent ceasefire agreement in October. In December last year, the LPDF announced that it will hold national elections in Libya in December 2021 and that it would elect an interim government to oversee the preparation and run the affairs of the country in the run-up to the elections.

The inclusion of members of the rival governments in the common list for the election held on February 8 indicated the growing possibility of reconciliation. Bashagha, who lost the elections, congratulated his rivals after the elections calling the vote on Friday a “vivid manifestation of democracy.”

Foreign interference is the biggest hurdle for peace

Abdullah al-Thani, head of the government in Tobruk, where a majority of the members of the parliament are based since they left Tripoli in 2014, has made his support to the interim government conditional on its approval by the parliament. While this might prove to be a minor hurdle in the peace process, the real obstacle is the continued backing of rival groups by international forces.

The war in Libya began exactly 10 years ago in February 2011 when rebel forces backed by the US and France launched an offensive against the government led by Muammar Gaddafi. Since the NATO-led invasion, the warring factions have received constant support from their foreign backers which includes the US, France, UAE, Russia, Egypt and Turkey, who have also scuttled all previous attempts at reconciliation. The success of the peace process requires the foreign backers to stop interfering, but despite their verbal support, so far, they have failed to keep their geopolitical and economic interests aside and cooperate with the UN.

The ceasefire agreement signed in October required all foreign troops in the country to withdraw within 90 days. The deadline for the withdrawal was last month but no country has done that yet. Turkey, the only country which has openly maintained troops in Libya, has explicitly refused to withdraw its forces and its parliament instead extended their stay for the next 18 months. Turkey claims that it will only withdraw its forces once the other countries do the same.