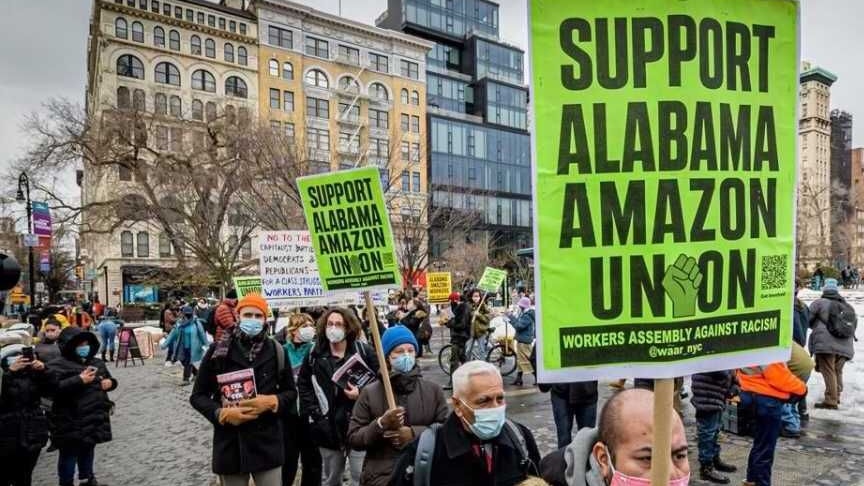 A solidarity demonstration, for the unionization efforts by Amazon's Alabama warehouse, held at New York City on March 2. Photo: Socialist Revolution via Twitter

As workers at Amazon’s Bessemer warehouse in Alabama are voting to decide on unionization, a solidarity campaign has been planned for the boycott of Amazon’s services. The UCOMM Blog reported that a “simple weeklong boycott” of Amazon is set to kick off on Sunday, March 7, and will continue until Saturday, March 13. The boycott is in response to Amazon’s efforts to thwart workers’ efforts to organize what will be the first ever union in one of its warehouses.

The call for a boycott, released on March 3 on UCOMM Blog — a news portal of UCOMM Media Group that handles communication services for over 35 unions in northeastern US — calls for Amazon customers across the country to not use any of its services, including its online video streaming service, Prime Video, and even its smart speakers Amazon Echo. The campaign asks people to participate in the boycott to “support Amazon workers and let the company know that we do not approve of their union-busting tactics.”

Amazon has a long history of union-busting, including hiring major anti-union consultancy firms like Center for Independent Employees (paying them to the tune of USD 3,000 a day) to firing those who were involved in mobilizing for safe working conditions in its warehouses.

In an interview with Sonali Kolhatkar, Stuart Applebaum, president of the Retail, Wholesale and Department Store Union (RWDSU), stated that Amazon carried out “the most aggressive anti-union effort I’ve ever seen” against Alabama unionization efforts. The RWDSU’s local chapter has been anchoring the campaign for unionization at the Bessemer warehouse.

Kolhatkar also reported about workers being faced with a blizzard of anti-union text messages and literal propaganda videos by Amazon. Last month, it was reported that the company has been working with local authorities to manipulate traffic lights outside the warehouse, to increase “maximum green lights” since as far back as December 2020 to prevent pro-union canvassing near the warehouse premises. Despite these efforts, over 3,000 of the 5,800 workers at the warehouse signed the petition indicating their “interest” for a unionization vote to the National Labor Relations Board (NLRB), which is conducting the vote.

The vote began on February 8 and workers will have until March 29 to mail their ballots. This is the second such vote to take place in an Amazon warehouse, after a failed attempt at unionization at a warehouse in Delaware in 2014. If the RWDSU can muster the required 50%  votes in favor of a union, it can pave the way for other similar unionization efforts not only within Amazon, but also among the largely unorganized delivery workers of the US.