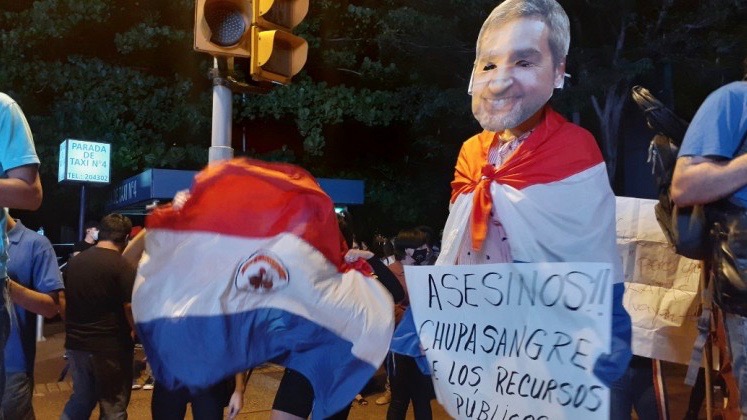 The streets of Asunción were ablaze with indignation on the night of March 5. Thousands of protesters gathered outside the Plaza de Armas in the capital of Paraguay to demand the resignation of far-right president Mario Abdo Benítez over his poor handling of the COVID-19 pandemic and the deepening economic crisis.

Protests raged on for hours and were met with heavy police repression. Paraguayan security forces shot protesters with rubber bullets and tear gas canisters. According to local media reports, one protester, 32-year-old Alejandro Daniel Florentín, was killed and eight were injured who are currently seeking medical care at the Trauma Hospital in Asunción.

The Union of Workers of Hospital Clínicas released a statement on the night of Friday March 5 calling on President Mario Abdo Benítez, the president of Congress Óscar Salomón, and the Minister of the Interior Arnaldo Giuzzio to stop the deployment of the National Police and Anti-Disturbance Squads against citizens exercising their constitutional right to protest.

They also reiterated their own worry over the public health collapse “As a union of healthcare workers, daily actors and witnesses to the negligence to the public health system in Paraguay, we have expressed our complaints over this situation plagued with irregularities and shortages! We demand the immediate cessation of hostility of citizens who have taken to the streets moved by the necessity of a response from an absent state in one of the most critical moments that affects our nation.”

They added, “If this continues, we warn that there will be an imminent social uprising, where as healthcare workers we will have to take measures.”

According to reports from Telesur reporter Osvaldo Zayas, the protests were called for by civil-society organizations after a series of complaints were raised by family members of COVID-19 patients that the country did not have essential medicine to treat them. These family members reported that they have had to spend large sums of money in order to ensure the survival of their loved ones. Zayas reported that the public health system is on the verge of collapse and many are not able to receive the treatment that they need.

This past week’s denouncements over the mismanagement of the public health crisis by the government is not new. Since the start of the pandemic, organized sectors in Paraguay have been mobilizing against the ineffective measures taken to combat COVID-19 and against the deepening economic crisis in the country worsened by the pandemic.

Earlier in the day, the Minister of Health, Julio Mazzoleni, had announced his resignation from the post, one day after the Senate approved a declaration which called on him to resign. The legislators had criticized his role in the mismanagement of the pandemic.

As of March 6, Paraguay has 165,811 confirmed cases and 3,278 deaths from the virus. On Friday March 5, the daily number of new registered cases reached a record high at 1,501. Meanwhile, the vaccination roll-out in the country is far behind neighboring countries. On February 22, the first vaccine was administered, but the country of 6.9 million only received 4,000 doses of the Sputnik V vaccine.

In addition to the anger over the public health crisis, tensions have also been growing due to the repressive actions carried out by the military forces in the country. On September 2, two Argentine girls Lilian Mariana and María Carmen Villaba, both 11-years-old, were assassinated at the hands of the Paraguayan military. Abdo Benítez’s government had attempted to cover up the crime stating that their assassination had taken place amid a confrontation with the guerrilla group, the Paraguayan People’s Army (EPP). The young girls’ bodies were even dressed up in military fatigues to make them look like guerrilla combatants.

However, on January 13, the Association of Lawyers from the Republic of Argentina and Peace and Justice Service, which are carrying out an independent investigation, announced that according to witness testimonies, the girls were detained alive by the Joint Task Force of the Paraguayan Army and later executed.

One of the witnesses to the crime, 14-year-old Carmen Elizabeth Liliana Oviedo Villalba, known as “Lichita,” was kidnapped and disappeared on November 30, 2020.

These crimes have evoked memories of the military dictatorship of Adolfo Stroessner who was from the same political party,  the Colorado Party, as current president Abdo Benítez. They have added to the growing indignation and unrest against the government and also drawn sharp criticism from international bodies such as the Inter-American Human Rights Commission and the United Nations High Commissioner for Human Rights Michelle Bachelet.

Protests against the government of Mario Abdo Benítez have continued on Saturday March 6 and are expected to continue in coming days as the public health situation in the country only gets worse and acts of violent repression against citizens grow. Organizations have launched the hashtag #EstoyParaElMarzoParaguay2021 (I am here for March in Paraguay 2021) to call for mobilizations.

In a press conference on Saturday March 6, the Minister of Communication announced in a press conference that Abdo Benítez has announced to all ministers that they should expect changes in the cabinet, but has not signaled that he has any intention of stepping down. He is set to speak at some point during the day.

Former president Fernando Lugo, who was overthrown in a parliamentary coup in 2012, called this move a distraction and called for mobilizations “in response to so much corruption and inefficiency of the Government.” He said that the solution is not only about changing the people but changing the economic model, “the model is spent, it does not work.”