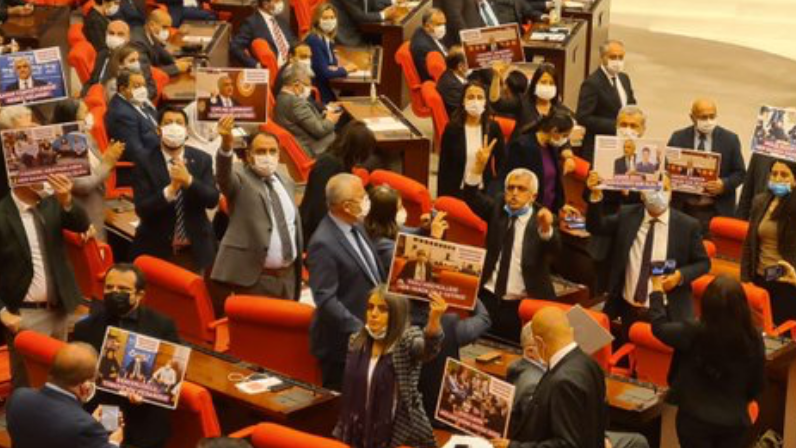 Turkey’s chief prosecutor has filed a lawsuit in the constitutional court to disband the pro-Kurdish left-wing Peoples Democratic Party (HDP). The party is accused of having links with the banned Kurdistan Workers’ Party (PKK). The move has been termed as yet another attempt to crack down on the opposition by the the right-wing government of Recep Tayyip Erdoğan.

Several left movements and parties across the globe condemned the Turkish government’s move calling it an authoritarian repression of dissent and political opposition.

The repression in #Turkey has reached a new, terrible level. Swiss parliamentarians show solidarity with the @HDPgenelmerkezi in their fight for peace, democracy and the rule of law! The international community must confront @RTErdogan decisively! pic.twitter.com/OE2Ti2jciv

The Progressive International condemned the move and called for an international mobilization against Erdogan’s authoritarian rule.

A motion has been filed with Turkey’s Constitutional Court to ban the entire @HDPgenelmerkezi party.

We call on progressive forces around the world to mobilize in their defense — and resist Erdoğan’s authoritarian rule.

The HDP is the third largest party in the Turkish parliament after ruling Justice and Development Party (AKP) and Republican People’s Party (CHP). It has 55 seats in the 600-member parliament.

The move to dissolve and ban the HDP came on the same day the parliamentary membership of one of its deputies Ömer Faruk Gergerlioğlu was revoked by the speaker. The revocation of membership was based over Gergerlioğlu’s alleged carrying out of “terrorist propaganda.” Gergerlioğlu had tweeted in support of peace talks between the government and PKK in October 2016. His tweet gave a link of a news story about PKK’s peace proposal and had said, “this call should be properly considered, there is no end to the issue…!” in Turkish.

A Turkish appeals court (court of cessation) had upheld the verdict of a lower court in Gergerlioğlu’s case and sentenced him for two years and six months in prison. He could not be jailed until his membership in the parliament was revoked.

Our MPs protesting the revocation of Ömer Faruk Gergerlioğlu’s parliamentary membership. AKP government has again stripped one of our MPs of their status to oust the opposition. As @gergerliogluof said, “The will of people cannot be trampled underfoot. Seeking peace is no crime!” pic.twitter.com/sNDjlLuRGi

Reacting to the move to ban the party and revoke the membership of Gergerlioglu, the HDP issued a statement saying that the case in the constitutional court indicates that “not having been able to overpower HDP ideologically, politically or at the ballot box, they [AKP-MHP alliance government] are now aiming to eliminate HDP from democratic politics by means of the judiciary. Their aggressiveness originates from their deep fear.”

The statement also gives a call for resistance to the move to disband HDP calling it a political “coup” saying “We invite all forces of democracy, the social and political opposition, and our people to joint struggle against this political coup d’etat, against the overt liquidation of law and democracy.”

The Communist Party of Turkey (TKP) also condemned the move to cancel the membership of Gergerlioglu tweeting, “a power that is desperate and uncontrolled enough to reduce the mandate of a deputy by inventing a “crime” that is not a crime and citing a single sharing as the reason, will definitely collapse.#ÖmerFarukGergerlioğlu.”

The Communist Party of Greece (KKE) issued a statement and denounced the move saying that it is a sign of Turkish government’s “intensification of authoritarianism and repression against the worker-people’s movement in Turkey and the “industry” of persecutions, under pretentious and fabricated accusations, against its (government’s) political opponents.”

Wednesday’s attack against HDP is not new. Two of its MPs Leyla Güven and Musa Farisoğulları representing Hakkari and Diyarbakir in the parliament respectively were stripped of their membership along with Enis Berberoğlu of the CHP in June last year after they were convicted by a Turkish court for their alleged membership of PKK and imprisoned.