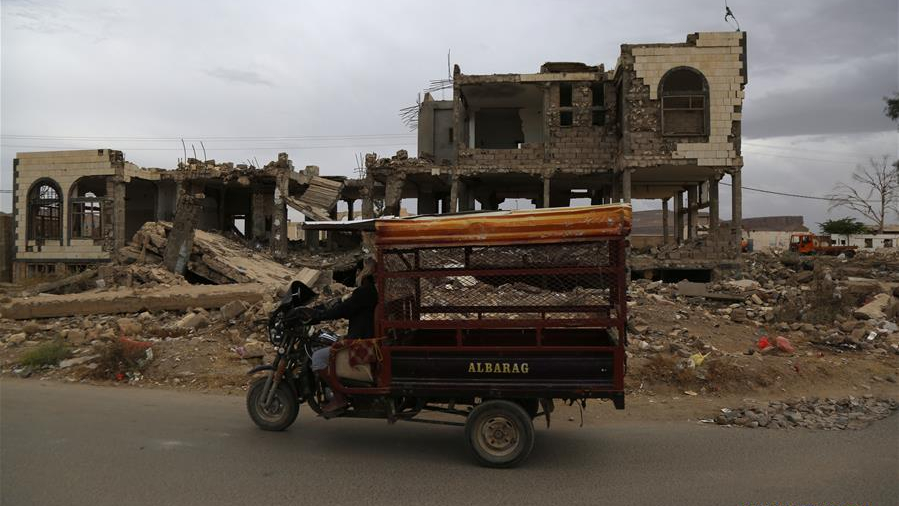 A man drives a tricycle near a house destroyed by airstrikes during the ongoing war in Saada province, Yemen, March 19, 2020. Photo : Mohammed Mohammed/Xinhua

The chief negotiator of the Yemeni group Ansar Allah (commonly known as the Houthis) said that Saudi Arabia should lift the air and sea blockade of the country unconditionally and stop air raids if they are really serious about the peace talks. Mohammad Abdulsalam was responding to Saudi Arabia’s foreign minister Faisal bin Farhan Al Saud’s ceasefire proposal.

Earlier on Monday, Saudi Arabia proposed a “peace initiative,” including a countrywide ceasefire under the UN monitoring and opening of Sanaa airport and Hodeidah port on a limited basis with revenue sharing with the Saudi-backed Hadi government. Though these facilities are under Houthi control, due to the Saudi Arabia-led coalition’s air and sea blockade, they have been unable to operate except for humanitarian purposes.

The Houthis said these proposals were not enough and have demanded a complete lifting of air and sea blockade which is responsible for the lack of food and medicine in the country leading to what the UN has called the “world’s worst humanitarian crisis of the century.” Abdulsalam, in his tweet, said that opening of the Sanaa airport is a humanitarian right and it cannot be used as a pressure tool for peace.

On Sunday, March 21, several patients suffering from serious diseases carried out a march at the Sanaa airport, demanding its immediate opening as they are unable to travel abroad for treatment due to the Saudi blockade, Iran’s PressTv reported.

More than 230,000 people have died so far in the war in Yemen and millions are on the verge of death due to starvation and lack of medical facilities. Saudi coalition forces have seized several ships carrying food and essential commodities to northern Yemen and carried out renewed raids recently.

The Saudi coalition-led air raids on civilian infrastructure have further crippled the country’s economy leading to a massive rise in poverty and lack of basic amenities, apart from the death of civilians. The Houthis have demanded an end to air raids and military occupation in the country’s south and eastern regions.

Saudis have increased their air raids on the Houthi-controlled areas in the last few weeks with Sanaa targeted on Sunday leading to injuries of several civilians. Even on Monday, Houthi-controlled Saba News Agency reported Saudi air raids in Jawf province causing heavy damage to civilian properties. The Houthis carried out a massive raid to liberate Marib province from the control of Hadi government forces. The battle for Marib is still going on.

The war against Yemen has been waged by the Saudi Arabia-led coalition with the aid of the US and other western allies in 2015 after the Houthis took control over capital Sanaa and most of the north-western part of the country where the majority of the Yemeni population lives, forcing the then president Abdrabbuh Mansur Hadi to flee first to Aden and then to Saudi Arabia.

The Saudis and their regional and western allies accuse the Houthis of being Iran’s proxy and support the Hadi-led administration as the government of the country. Both Iran and the Houthis have denied the allegation. The Houthis claim that their fight against the Hadi-led government is a fight for Yemeni sovereignty and against widespread corruption during his reign.

Though the Joe Biden administration has announced the end of arms sales to the Saudis, it has yet not acted on its promise to end cooperating with them in the war on Yemen and continues to take a pro-Saudi stand blaming the Houthis for the war.