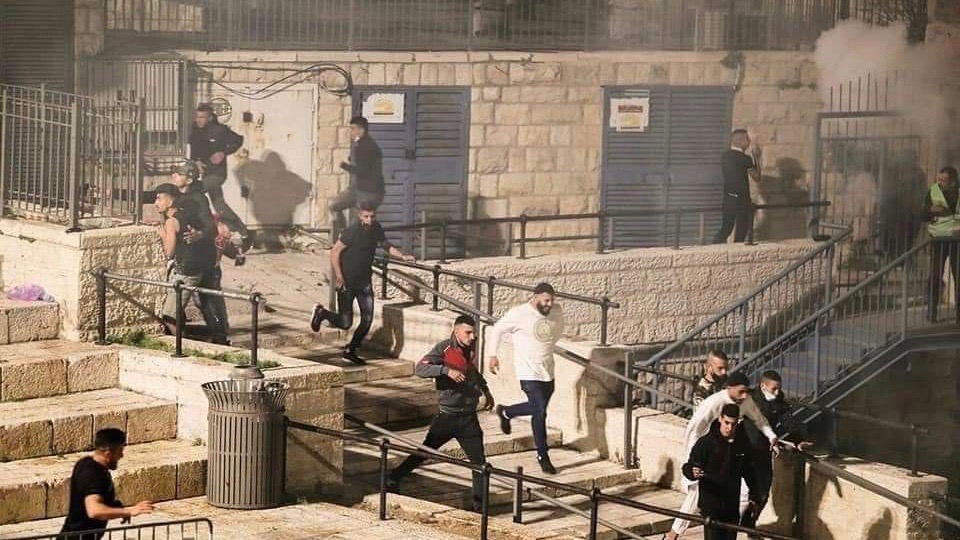 Scores of Palestinians were injured and several arrested after Israeli forces, along with illegal settlers, attacked them in occupied Eastern Jerusalem on Thursday, April 22. Palestinians coming out of the Al-Aqsa mosque after special Ramadan prayers in the evening were attacked by hundreds of settlers. When the Palestinians tried to counter the attack, the occupation forces used water cannons and stun grenades against them.

Earlier on the day, hundreds of illegal settlers led by extreme-right-wing group Lehava marched through the old city and gathered at Damascus gate shouting “Death to the Arabs” and “Arabs get out”. The march was called by the group as part of the violent anti-Palestinian provocations in the old city ongoing for almost a week now.

Hundreds of right-wing Israeli Jews are roaming the streets of Jerusalem tonight, chanting "Death to Arabs" and searching for Palestinians to assault. Their actions echo the racist and violent rhetoric of Israeli government officials:pic.twitter.com/Ag9hHGAhNs

Lehava, according to Israeli media reports, had called on its supporters through WhatsApp messages to carry guns during the protest.

Several other extreme right groups also gave similar calls for violence against Palestinians.  Incidents of attacks on Palestinians and their houses were reported from across the old city on Thursday. Videos of some of these attacks are circulating on social media. In one such incident, a man is seen firing a few rounds from a car carrying Israeli flags.

The Lehava protesters unleashed violence against Palestinians throughout their protest route. They attacked Palestinian workers in the city’s Mahane Yehuda market in front of the Israeli forces before reaching Damascus gate.

Lehava, led by Jewish supremacist Bentzi Gopstein, openly calls for violence and intimidation against Palestinians. Its so-called agenda is to “restore Jewish dignity”. The group opposes any kind of intermingling between the Arabs and Jews and opposes any public activity by a non-Jew in Israel. It has unleashed violence in occupied Jerusalem to oppose Palestinians’ activities during the month of Ramadan.

THREAD: Israeli settlers have been violently attacking Palestinians in occupied #Jerusalem every day during #Ramadan and sharing the videos on TikTok. pic.twitter.com/OA43CkCn19

Following the reports of violence, Palestinian Authority (PA) issued a statement on Thursday, condemning the open calls for killings and violence against Palestinians in the city. The statement issued by PA president Mahmoud Abbas asked the international community to protect the Palestinians from ongoing settler attacks, claiming that they were encouraged by the Israeli government, Palestinian news agency Wafa reported.