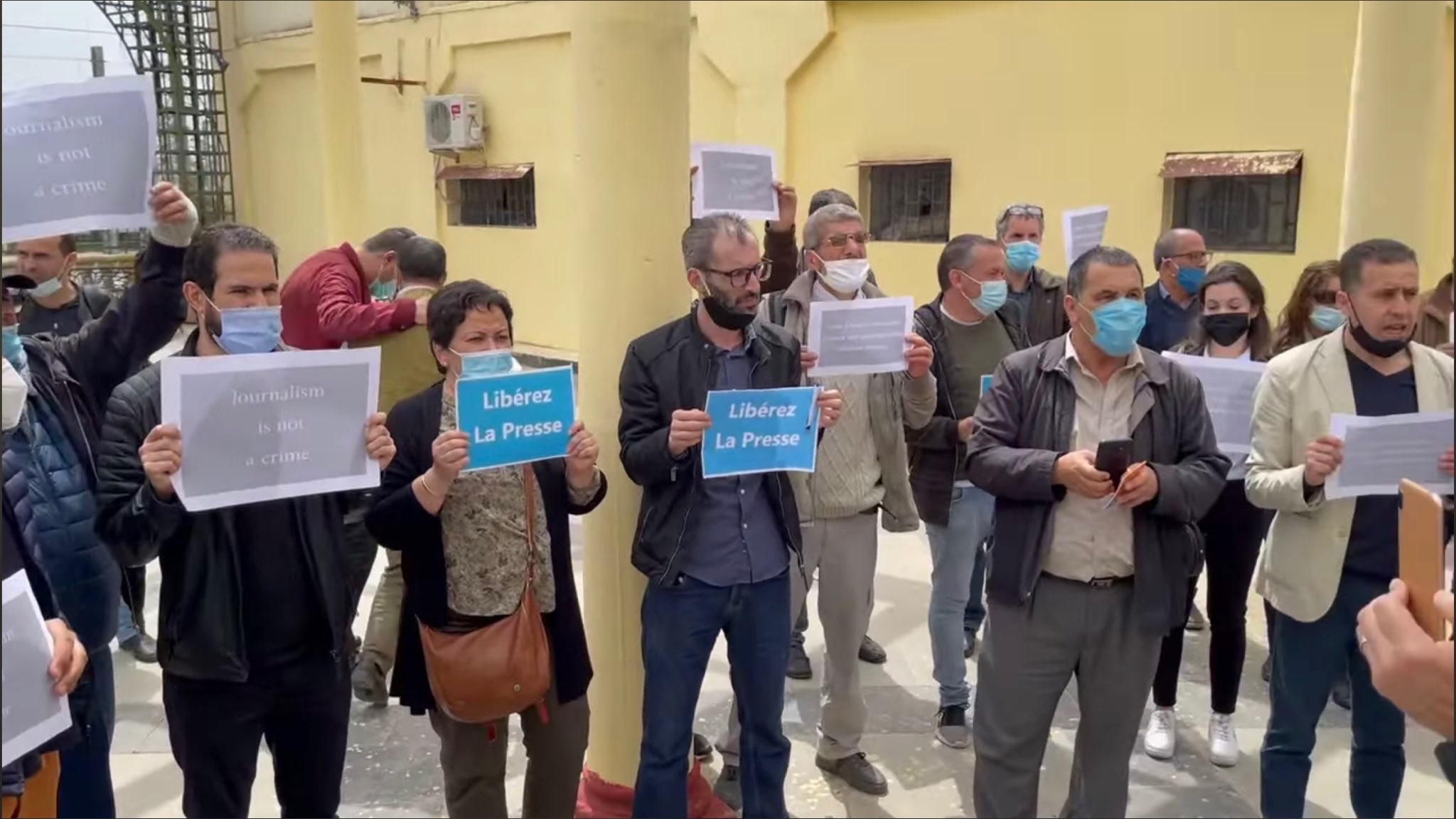 Hundreds of Algerian journalists on Monday, May 3 staged a protest demonstration in the capital Algiers on the occasion of the World Press Freedom Day. They demanded that the Algerian government unconditionally release all journalists currently being held in pre-trial detention, Asharq Al-Awsat news outlet reported. They also called on the government led by presi dent Abdelmadjid Tebboune to end judicial persecution and the crackdown on journalists who criticize or oppose the government’s policies.

The journalists also organized a sit-in demonstration at the freedom square in the city the next day. There was reportedly heavy deployment of security forces who cordoned off the area and prevented the protesters from reaching the city’s main streets. The protesters highlighted the case of journalist Rabah Kareche, who has been in pre-trial detention since April 19. Kareche is a reporter with Liberete Daily and has been accused of “spreading hatred and discrimination” while covering the anti-government Hirak protests.

Prominent Algerian journalist Khaled Drareni, who was recently released by the authorities after spending more than 11 months in prison for charges including “inciting an armed gathering” and “harming national unity,” also participated in the protest. He is awaiting retrial in the Supreme Court after his earlier conviction was overturned. Drareni was arrested while covering the Hirak demonstrations. The evidence used against him during the trial was primarily his social media posts expressing support for the movement and criticizing the country’s corrupt political system.

Read | World Press Freedom Day: “Tyranny is not destiny, freedom has to be achieved

Another journalist at the protest, Liberete Daily’s Hassane Ouali, called Kareche’s detention totally unjustified as he was only carrying out his professional duties as a journalist. Fellow journalist Nejib Belhimer also raised concerns over the government’s recent actions to exercise control over the media, such as introducing new legislation that targets journalists and bloggers unfairly and with no legal justification.

According to news reports, the government has in the last two years also banned several prominent news portals, including Maghreb Emergent and Tout Sur l’Algérie. Both the news outlets had published articles critical of the current political establishment, especially the president. They had also written against the Algerian security and intelligence services for their crackdown on Hirak protesters, journalists, activists, bloggers and other dissenters.

Algeria was named one of the worst countries in the world in terms of press freedoms in a report by Reporters Without Borders last month. The country ranked near the bottom of the list at 146. The report also mentioned the case of Drareni, who after originally being given a three-year prison sentence had it reduced to two years following an appeal in September last year before it was overturned. RSF also said that the sentence was proof that the Algerian government has “locked itself into a logic of absurd, unfair and violent repression.”

Even as journalists protested the detention of their colleagues, a Twitter user posted about journalist Amira Bouraoui being sentenced to two years in prison for criticizing the Algerian government.