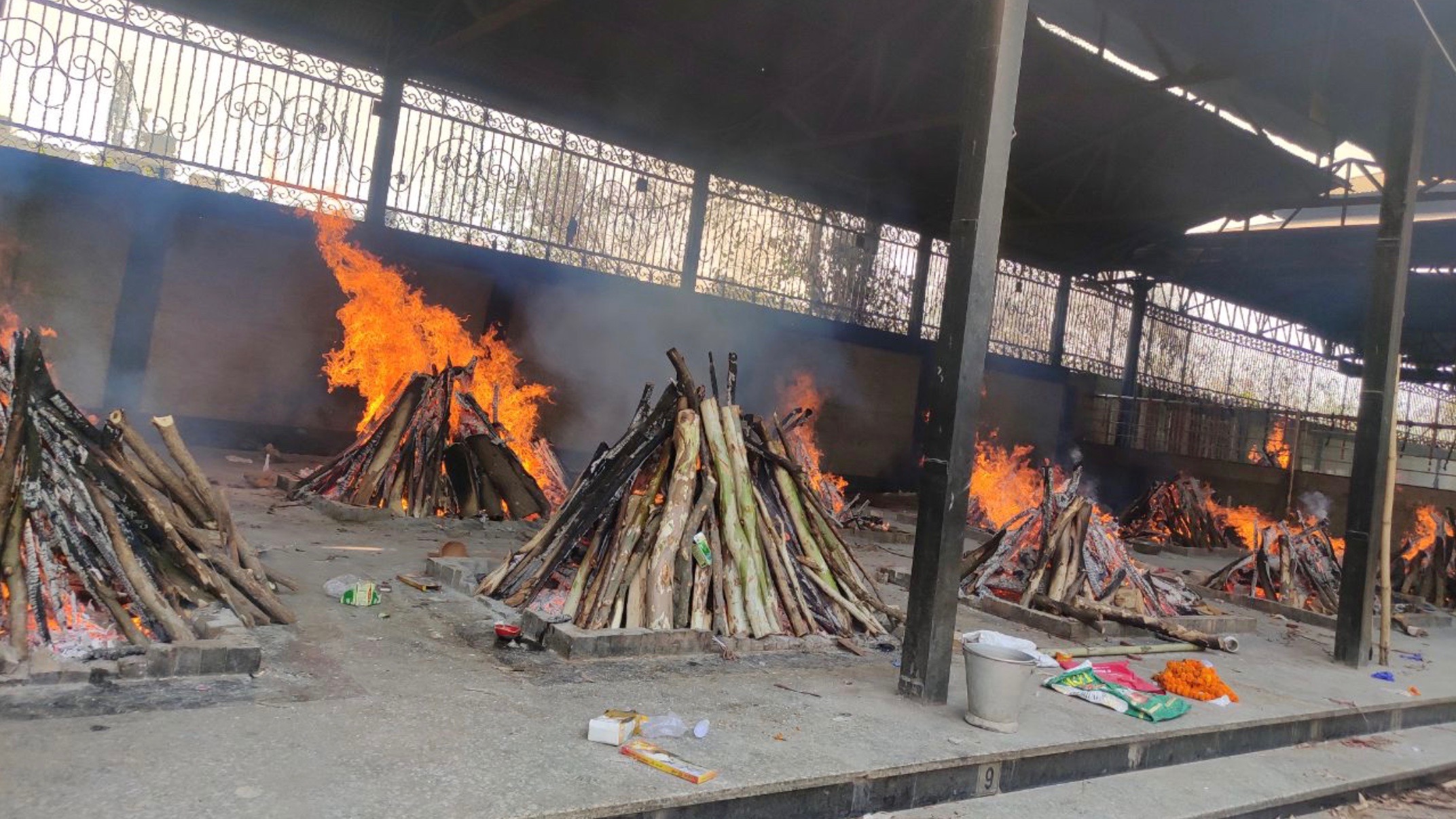 India’s second COVID-19 wave has caused large-scale death and devastation leading to bodies piling up in overwhelmed hospitals and crematoriums, which have reached their breaking point. In front of the mortuary of Ram Manohar Lohia Hospital, one of the biggest government hospitals in New Delhi, India, on May 5, the day starts with five bodies being piled up in a van-turned-ambulance, which are taken to the crematorium, as more ambulances stand in a queue, waiting for their turn to ferry half-a-dozen more dead bodies there.

I witnessed these scenes on the early morning of May 5 with 20-year-old Arjun, whose father had succumbed to death due to COVID-19 hours earlier. Arjun and his cousin stayed outside the hospital building the entire night, unable to muster the strength to inform Arjun’s mother and younger brother about the death of their loved one. One of the five bodies that were piled into the van-turned-ambulance outside the mortuary of the hospital was that of Arjun’s father.

Arjun’s 61-year-old father, Sreedharan, was employed in a private publishing firm in Delhi and lost his job during the first wave of the COVID-19 crisis approximately a year ago, which hit the working population of India hard. According to a report by the Centre for Monitoring Indian Economy, about 21 million salaried jobs were lost between April and August in 2020.

Sreedharan and his family had been living in Delhi for the past 20 years. After he lost the job, Sreedharan had planned to move to his home state, Kerala, in southern India. The family had even started building a house in Kerala, which they planned to move into once it was ready by the end of June.

But, as the second wave of COVID-19 started engulfing the Indian population, a different fate awaited the family. Sreedharan, who had been experiencing a severe cough for a few days around the third week of April, was told to get himself to a hospital immediately when he consulted a doctor on April 21. The doctor had checked Sreedharan’s oxygen level and found that it had dropped below the normal level. There were no hospital beds available in Delhi by then due to the sudden surge of cases witnessed in the city from April onward. Sreedharan set out with Arjun to look for a hospital bed for himself soon after he spoke to the doctor but returned home around 2:30 a.m., disappointed and more tired.

By the time he got a bed in Ram Manohar Lohia Hospital on April 22, his oxygen level had dropped to 60 percent—normal oxygen levels range from 95 to 100 percent. Despite this, he was unable to get proper oxygen support. His oxygen level had dropped further to a dangerously low 54 percent, and nothing but an ICU bed could have saved him. However, he had to wait two more days until April 24 before he started getting the required oxygen support and was moved to the ICU ward of the hospital four days later. He spent a total of 12 days in the hospital.

By then, all his family members—including Arjun, as well as Sreedharan’s wife and younger son—had tested positive for COVID-19. According to the medical protocol, they should have isolated themselves and quarantined while monitoring their symptoms. However, after witnessing the lack of medical staff and the suffering of other patients in the hospital, who were not receiving timely medical assistance, Arjun stayed with his father day and night, despite being sick himself. No one in the hospital encouraged him to stay at home despite knowing that he was sick, nor did he receive any surety that his father would receive the medical attention he needed, in his absence. He remained there, as he felt that he could monitor his father’s situation better. Yet, his father’s health kept deteriorating day by day, and he died at 2:30 a.m. on May 5. His body, along with four others, was put into an ambulance, which then proceeded to the Punjabi Bagh Crematorium in Delhi. Arjun, Sreedharan’s nephew and I followed the ambulance in a taxi.

Sreedharan’s wife and younger son were at home. They were not informed about his death, as there was no one around to console and comfort them. A few people who did come to know about Sreedharan’s death did not want to go near his house out of fear of COVID-19.

We wanted to head home and asked the hospital authorities if they could cremate the body without us. We were told that if we wanted to ensure that the funeral took place, we would have to head straight to the crematorium ourselves and present some documents. Once we reached the crematorium, it took almost two hours just to register for the burial. Ambulances carrying dead bodies kept coming during this time. The authorities at the crematorium informed us that if we wanted to carry out the last rites using the electric crematorium, we would have to wait there all day since there were many dead bodies already in the queue to use the facility. As in life, the dead are also being made to wait for their last rites during the second wave of this COVID-19 crisis in India, snatching away their dignity and rights even after life.

The other option before us was to burn the body on a funeral pyre. But we would have to set it up ourselves. Out of the 80 places available to carry out the last rites, we would be allotted one. The graveyard seemed like a burning woodshed with endless rows of burning funeral pyres providing the last resting place for human beings who had been made to fight hard for each gasp of breath. More dead bodies kept coming into the crematorium grounds every 10 minutes as we witnessed more mourning relatives joining our ranks.

Wanting to head home and be with Arjun’s mother and brother, we wanted to carry out the last rites as soon as possible and stood by for the necessary permission to do so. We were, however, made to wait longer—the arrangement of the endless rows of funeral pyres required that more bodies made their way to the funeral grounds and their loved ones set up their funeral pyres before we could begin.

Vijoo Krishnan, a leader of Communist Party of India (Marxist), said that in early May, he witnessed an argument between the relatives of two patients over an oxygen cylinder. One of them died in front of his eyes. In the crematoriums, similar quarrels were seen over whose body would make it to the crematorium grounds first. The second wave of COVID-19 has increased the sense of helplessness witnessed by people in India, who have had to go through seeing a loved one struggle to get the medical attention necessary for their survival.

After the funeral of a man whom I had never met before his death, I returned to his home with his son and his nephew where his wife and younger son were still unaware of the departure of their loved one and were alone at home. As many families continue to experience losses similar to that of Arjun’s family, they increasingly feel anger and a sense of alienation as they deal with their grief alone in the absence of a responsible government, as the BJP-led government of Prime Minister Narendra Modi chooses to distance itself from any blame for this crisis. The result is a dehumanization of the whole experience of mourning the loss of a loved one in India.

Meanwhile, outside the ICU, people continue to wait impatiently for the death of patients to free up ICU beds and the mortuary, and ambulances wait for more dead bodies to be dumped so that they can be taken to the crematorium. At the crematorium, people wait for space to free up so that their own loved ones can be cremated.

On the way back, I remembered my friend Rahul, age 28, whom a few of us were able to airlift to a government medical college in Kerala a few days prior from the same hospital where Sreedharan had died. Rahul’s doctor had referred him to get admitted to an ICU, but after he was admitted to Ram Manohar Lohia Hospital on April 23 for a week, he was unable to get an ICU bed. Fortunately for him, he was taken to Kerala, and he is out of danger now. Arjun’s father was, however, not this lucky.

Nitheesh Narayanan is an activist with the Students’ Federation of India (SFI) working as a member of its central secretariat. He is a PhD scholar in the Centre for the Study of Social Exclusion and Inclusive Policy of Jawaharlal Nehru University in New Delhi. He is the editor of Student Struggle, SFI’s journal. He is also working with Tricontinental Research. Narayanan is a Globetrotter/Peoples Dispatch fellow.