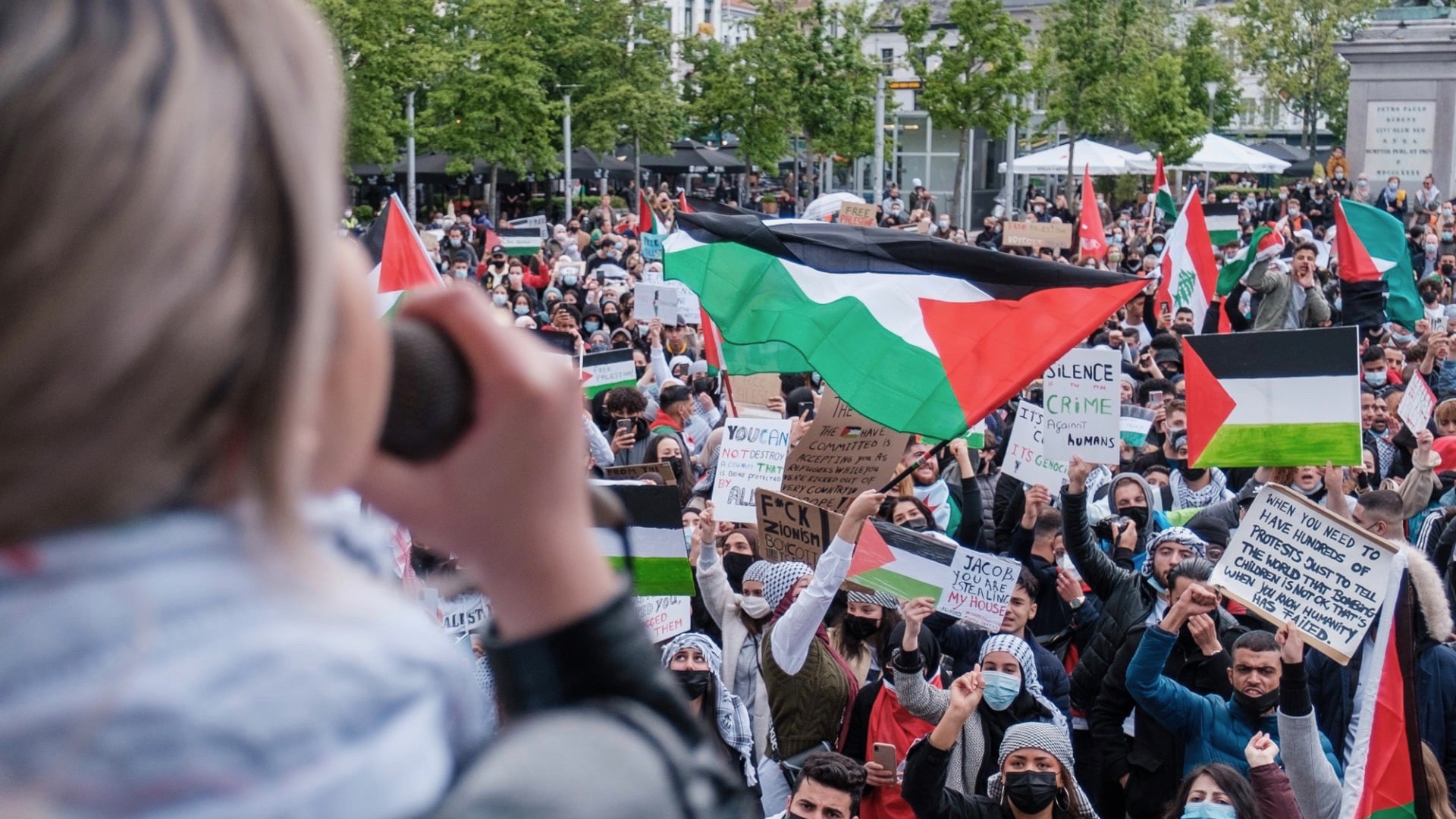 Amid the escalation in Israeli attacks against Palestinians in Gaza and Jerusalem, massive protests have been called across the world to demand that Israel stop its crimes and to show solidarity with the Palestinian cause. Across Europe progressive organizations demanded that their governments stop supporting Israel with funds and weapons and put pressure on it to cease its crimes.

On May 16, Palestine solidarity demonstrations were held in the Belgian cities of Antwerp, Ghent, Verviers, Genk and Hasselt, among others. The mobilizations saw the participation of activists of the Workers Party of Belgium (PTB/PVDA), Palestine solidarity networks and student/youth groups like RedFox, Comac and others. The protesters demanded the European Union (EU) and the Belgian government to stop supporting Israel’s settlement policy and initiate economic and political sanctions against Israel. On Monday, thousands demonstrated at Place Saint Lambert in Liège, including activists of the Communist Party of Belgium (PCB), to express solidarity with the people of Palestine. The PCB stated that a two-state solution was threatened by the Zionist entity’s aggression, colonization and ethnic cleansing of Palestinians.

On Saturday, May 15, the Ireland Palestine Solidarity campaign and Trinity BDS campaign organized various events across Ireland to mark the 73rd anniversary of Nakba Day. The Communist Party of Ireland (CPI) condemned “the barbaric acts of violence, repression and bloodshed carried out by the Zionist settler colonial regime in Palestine, that have left hundreds dead, including men, women and children.” The Workers Party of Ireland, People Before Profits, Connolly Youth Movement (CYM), and others, also extended their solidarity to the people of Palestine.

In France, progressive sections, including the French Communist Party (PCF), Young Communist Movement of France (MJCF) and Union of Communist Students (UEC), protested the Israeli aggression against the people of Palestine. PCF national secretary Fabien Roussel said that “the murderous escalation underway must be stopped. France must speak out clearly in favor of law and justice: the colonization of East Jerusalem and the West Bank must end immediately, Palestinian political prisoners must be released, starting with Marwan Barghouti, Palestinians must have access to their state within the 1967 borders and free food, power, alongside the State of Israel, discrimination must finally end within the State of Israel.”

On Saturday, various cities across the UK, including London, Sheffield, Leeds, Manchester, Liverpool, Edinburgh, Cardiff and Aberdeen, saw hundreds of thousands of people protesting the Israeli attacks against Palestinians. In London alone, more than a hundred thousand protesters marched to the Israel embassy. The Communist Party of Britain (CPB) also condemned the Israeli aggression. Cadres of the Young Communist League (YCL-Britain) and Revolutionary Communist Group (RCG) took part in the demonstrations.

In Germany, the German Communist Party (DKP) demanded an end to the Israeli occupation. The DKP extended its support and solidarity to the Palestinian people and the peace groups in Israel, especially the Communist Party of Israel (Maki) which has protested the war policy of the Israeli government braving repression.

Mobilizations also took place in several cities across Greece, Portugal, Spain, Austria, Italy and other European countries in solidarity with the people of Palestine.

On Friday, May 14, in an emphatic display of solidarity with the Palestinian people, Italian port workers in Livorno, Tuscany, refused to load a shipment of weapons and explosives reportedly destined for Israel. The Unione Sindacale di Base (USB) faction in Livorno expressed solidarity with the Palestinians and stated that “Livorno must not be an accomplice to the wars and massacres of civilian populations and workers like us.”