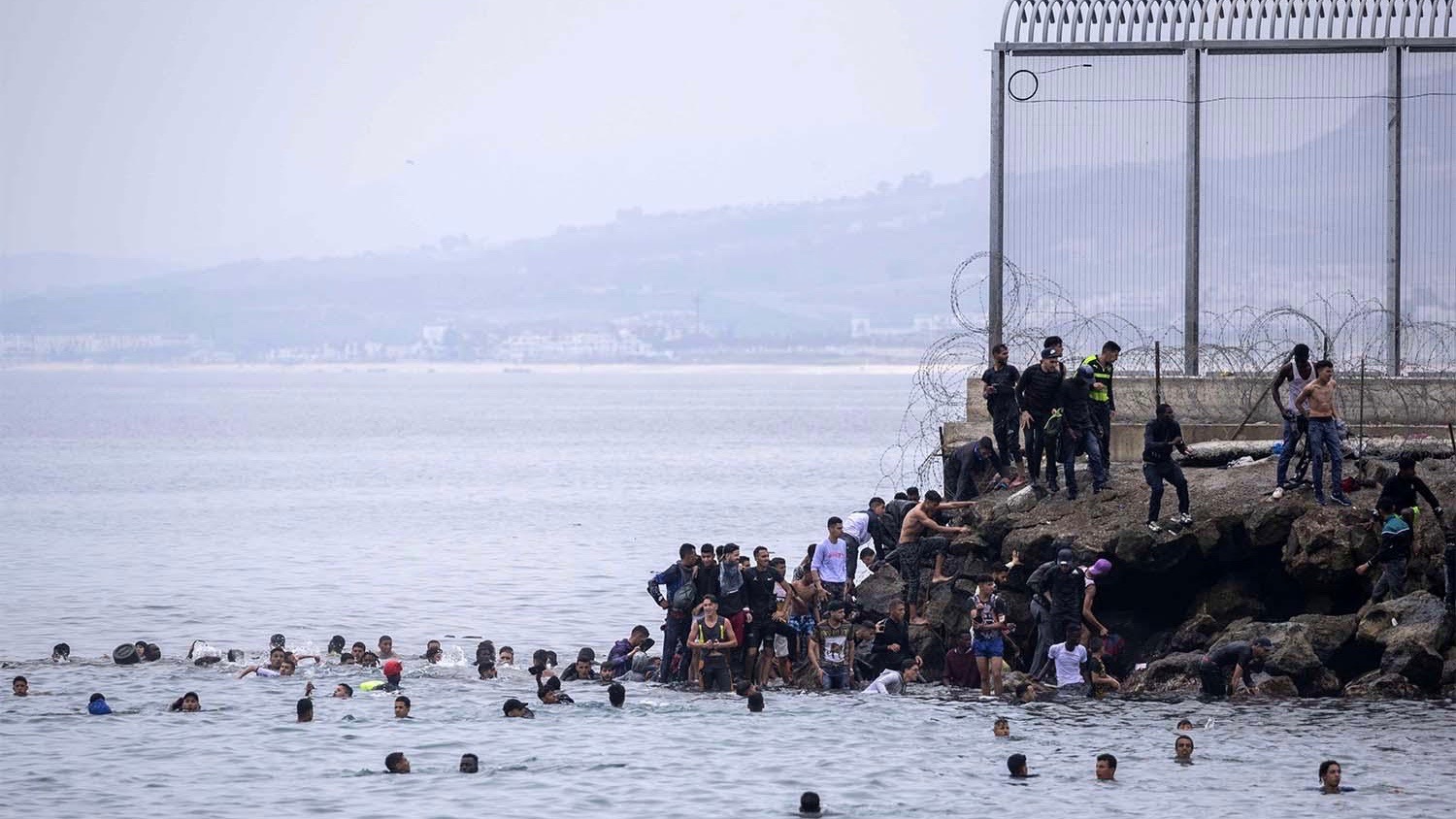 Thousands of migrants, mostly from Morocco or sub-Saharan Africa, reached the Spanish enclave of Ceuta in search of better life prospects in Europe. However, most of them have been sent back or are in detention. Between May 17-18, approximately 8,000 migrants managed to swim the roughly 200 meter distance to Ceuta, located on the tip of North Africa bordering Morocco. Some attempted to reach by climbing over the fence on the Moroccan border with Spain.

The migrants were intercepted by the Spanish security personnel patrolling the borders and at least 5,600 were sent back by Wednesday, May 19, according to the Spanish government. Around 6,000 of those who had arrived were Moroccan nationals and an estimated 2,000 were children. They were held in a local football stadium before being sent back. The children were taken to industrial buildings and warehouses run by charity groups.

Along with the town of Melila on the Northern coast of Morocco, approximately 300 kms away, Ceuta, with a population of roughly 80,000, is one of the two main Spanish territories which has long served as one of the first stops for migrants and refugees trying to enter Europe. Local government sources stated that 86 migrants had crossed the border into Melilla on Tuesday, adding that a larger group was blocked from entering by the Moroccan police on their side of the border.

Spanish security forces reportedly used excessive force, metal batons, smoke bombs and tear gas against the migrants in Ceuta. Armored vehicles were seen patrolling the beach to prevent migrants from going any further. They were given basic medical attention before being hauled away to temporary detention prior to their return. The number of people who managed to escape the security forces guarding the border areas was unclear. Reports stated that at least one migrant drowned in his attempt to swim across the Mediterranean sea.

On Wednesday, the number of migrants trying to enter Spain decreased drastically due to reinforcing of the border by the Spanish authorities. The Moroccan police on their side of the border also set up barriers and prevented migrants from crossing. They also sealed the Fnideq border crossing and turned away people approaching the border gate.

Spanish prime minister Pedro Sanchez denounced what he said was an “act of defiance” by Morocco, blaming the country for the migrants trying to enter Spain. In a statement to the Spanish parliament on Wednesday, he said that “the lack of border control by Morocco is not a show of disrespect of Spain, but rather of the European Union.”

The EU has backed the Spanish position, with vice president of the European Commission, Margaritis Schinas, saying that Europe “won’t be intimidated by anyone.” He claimed that over the past 15 months, third (non-Europe) countries had made attempts to raise the migrant issue with Europe. According to him, the situation is not just a matter of concern for Spain but for all of Europe.

The influx has led to further souring of relations between Morocco and Spain. The two countries are already involved in a bitter diplomatic dispute over Spain’s decision last month to admit the leader of Western Sahara’s Polisario Front, Brahim Ghali, in the country for medical treatment on humanitarian grounds. Morocco had expressed strong disapproval and anger at Spain’s decision. Some analysts have speculated that Morocco is using the migrants as a pressure tactic following Ghali’s secretive hospital admission, although both Spanish and Moroccan government officials and diplomats have refuted these claims.

Morocco wants Spain to recognize its occupation of Western Sahara following the US granting recognition of its claims in December 2020. Spain maintains that the conflict in Western Sahara can only be resolved by an agreement brokered by the United Nations.

Meanwhile, hundreds of unaccompanied migrant children have been stranded without their parents or family in and around Ceuta, Al Jazeera reported on Thursday, May 20. They are reportedly being held under police supervision in overcrowded warehouses operated by human rights groups and charities as part of a compulsory 10-day COVID-19-related quarantine period.

According to testimonies given by some of the children to international news agencies, Moroccan authorities actively encouraged people to cross the border from Monday following Spain’s decision to admit Ghali. Many of the migrant children were reportedly locked up in prison in Morocco before being set free to cross the border. Some of the children also reported that Spanish security forces physically assaulted them with metal batons and used racist language against them.