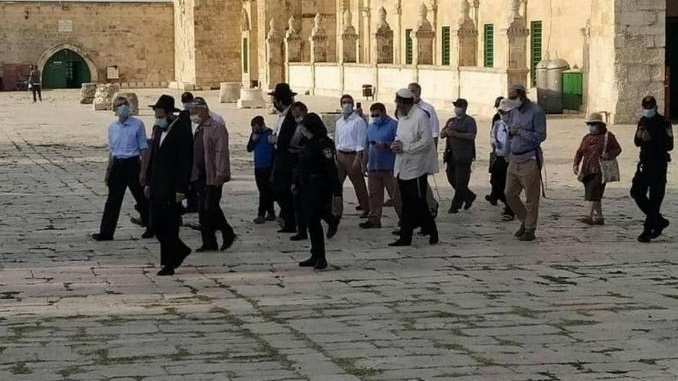 Days after a ceasefire was announced putting an end to Israel’s brutal bombardment of Gaza, violence against Palestinians continued across the region. While Palestinian activists are being arrested and restrictions have come up in the locality of Sheikh Jarrah, fresh invasions were reported at the Al Aqsa mosque compound. The planned evictions of Palestinian families in Sheikh Jarrah and the repeated attacks on worshipers at Al Aqsa, both in East Jerusalem, had led to massive protests in the occupied territories, as well as rocket firing by Hamas. Israel responded to this with its brutal assault on Gaza and other parts of historical Palestine.

Following the raid by settlers, the Israeli security forces banned the entry of anyone over the age of 45 into the mosque compound. According to an official of the Jerusalem Islamic Waqf (Religious Endowment), the body which is appointed by Jordan to administer and look after the mosque compound, the situation is very “dangerous” as extremist settlers continue to invade the mosque premises regularly. According to an agreement dating back to 1967, the status quo at the mosque must be maintained and only Muslim worshipers are allowed to pray at the al-Haram al-Sharif, the third holiest site in Islam.

At the beginning of the month too, settlers had entered the mosque during the holy month of Ramadan, leading to clashes with Palestinians. On Friday, Israeli police had invaded the mosque premises and attacked Palestinians with tear gas and stun grenades, leading to fierce resistance.

Palestinian news agencies and activists have warned of a 48-hour mass arrest campaign in the Occupied Territories and Israel. As reported by Quds News Network, Israeli forces will carry out Operation Law and Order against a “bank of targets”. Youth organizers have stated that thousands of forces including border patrol have been deployed in Palestinian villages and cities. As per reports, at least 500 Palestinians will be targeted for participating in the uprising over the past month.

Israeli forces and police are going on a mass arresting rampage in Lydd, and other Palestinian cities in an attempt to ‘even the score’ with Palestinians that spoke up against their ethnic cleansing. This is what we warned about. Israel will target us all when you stop looking. pic.twitter.com/RvYbyQcSUl

Reports from the ground also indicated that Israeli forces have also placed a blockade on the Sheikh Jarrah neighborhood. Palestinians have reported being forced to show their IDs and no one from outside the neighborhood is being let in. Meanwhile, Israeli settlers, who are often armed, are allowed to enter.

The ceasefire on Friday saw an end to the 11-day assault on Gaza by Israel which ended up killing 248 Palestinians, including close to 70 children, wounding close to 1800 and rendering roughly 90,000 Palestinians homeless. 12 people were killed in Israel due to rockets fired by Hamas.