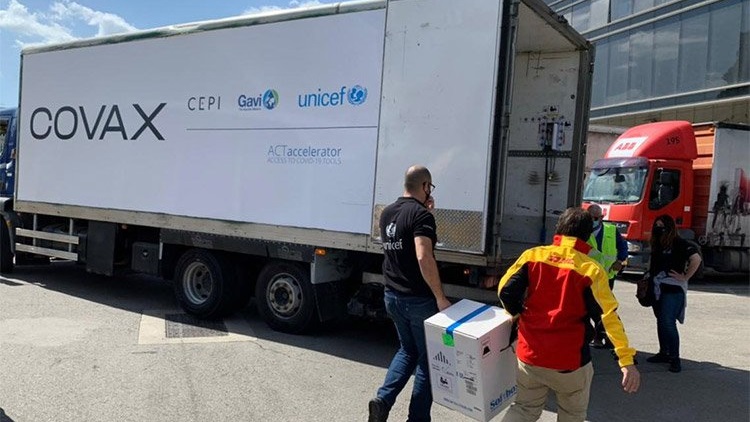 The first dose of vaccines under the Covax initiative arrive in Palestine in March. Photo: World Health Organization

After almost two weeks of aggression on Palestine, Israel finally agreed to a ceasefire on May 20. History, however, tells us that this is a fragile ceasefire and Israel will not let go of any opportunity to attack Palestinians.

The 11-day bombing and missile attacks on Gaza have had a devastating effect. Gaza remains the world’s largest open-air prison with its nearly 2 million population having no access to the outside world, except when permitted by their prison guards. The West Bank too is effectively under occupation, with Palestinian Authority’s writ limited to only a small area, that too on a limited number of subjects. A silent attack has been going on for a long period to change the demography of Jerusalem and dispossess the West Bank Palestinian population of its land. Increasingly, the apartheid nature of Israel, whether in the occupied West Bank, Jerusalem or within its own territories itself, is becoming obvious.

In this article, we would restrict our focus on one particular aspect of this apartheid – vaccine apartheid. Israel has among the highest vaccination rates for COVID-19 in the world, surpassing countries like the United States, United Kingdom, Germany and the United Arab Emirates. However, Palestinians, for whom the Israeli Occupying Forces (IOF) are responsible for providing healthcare, have hardly been vaccinated.

According to the website ourworldindata.org, nearly 62.9% of Israeli citizens had received at least one shot of a COVID-19 vaccine as of May 26. The corresponding numbers for the United Kingdom and the United States were 55% and 47%. Israel started the process early, reaching agreements with Moderna, Pfizer and AstraZeneca as early as June and July 2020. Soon, it signed purchase agreements with various vaccine manufacturers. By mid-December, the country had started vaccinating its citizens.

But the Palestinians don’t seem to have figured in these calculations at all. The only Palestinians vaccinated were those who had a high chance of coming in contact with Israeli citizens, such as prisoners in Israeli jails or healthcare workers in Israeli hospitals.

In gross violation of such international laws, the Israeli government did not start the vaccination of the Palestinians from the beginning. Vaccination for the Palestinian population started only towards the end of March, that too after some international pressure and donations of vaccines by other countries such as Russia. As of May 26, only 5.7% Palestinians of a population of 5.2 million had received at least one shot. Covax, an initiative of the World Health Organization and other agencies, had promised support to low-and-middle-income countries. However, it is limited to 20% of the population of a country. It looks like Palestinians are on their own at the moment with no support from the IOF and little support from international mechanisms.

The difference in vaccination rates is clearly reflected in the number of COVID-19 cases. Since the pandemic started last year, the worst day for Israel was on January 17 when it had 996 cases per 1 million people. However, with ever increasing vaccination, the cases declined fast, reaching 6 cases per million by 8 May, Palestine, on the other hand, had 125 cases per million on that same day.

It is not only vaccinations that have been hampered. For the whole of last year, the Israeli government has made it difficult for Palestinians to avail the usual health services, as shown by a report by the WHO released last Wednesday. Essential health services have been adversely affected by the need to reallocate limited resources, including human resources, to COVID-19 preparedness and response. In the Gaza Strip, for example, only 12 of the 54 primary care facilities (22%) remained open throughout the outbreak of COVID-19. Hospitals in the West Bank saw up to 40% decline in admissions. Examining the role of Israel, the report noted “Israel continued the implementation of its permits regime for Palestinians in 2020, with longer- term access barriers for Palestinian patients, companions, health care workers and ambulances exacerbated in the context of the Covid-19 pandemic.”  Israel denied permits to access healthcare in other countries, especially after the pandemic hit. “For the Gaza Strip, 69% of the 3,554 patient permit applications submitted in January and February [2020] were approved, while 81% of the 16 574 submitted in the West Bank were approved for travel to reach health care. By April 2020, there had been a more than 90% decline in permit applications for patients and companions from the Gaza Strip and the West Bank, outside east Jerusalem, compared to monthly applications for January and February,” noted the WHO.

The ongoing World Health Assembly discussed the report and voted on a draft decision cosponsored by 28 countries, including Cuba and Venezuela. The decision was adopted with 83 countries supporting, 14 opposing and 39 abstaining. The decision urged the WHO to “ensure non-discriminatory, affordable and equitable access to COVID-19 vaccines to the protected occupied population.”

It is clear that Israel has followed a policy of denial of health services on all fronts to the Palestinians. At a time when the world is facing the raging threat of COVID-19, it is the legal, moral and humanitarian duty of Israel to provide health services, including vaccination, to Palestinians. This is the obligation of an occupying power. Of course, the just solution is for Israel to vacate its occupation. That is what it had agreed to in the Oslo accords – which are now dead and only waiting for a formal burial.