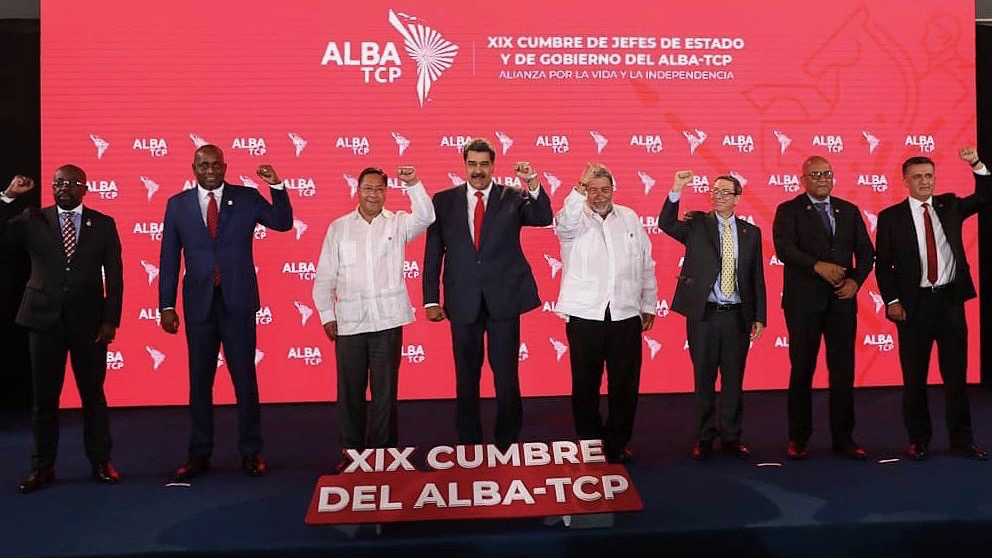 The heads of state and ministers of the member countries of the ALBA-TCP in Caracas, Venezuela. Photo: ALBA-TCP

The XIX Summit of the Bolivarian Alliance for the Peoples of Our America – People’s Trade Treaty (ALBA-TCP) was held in Caracas, Venezuela, on June 24, with the participation of the heads of state and ministers of the member countries. At the end of the summit, the bloc ratified its commitment to a genuine Latin American and Caribbean integration and unity in the face of growing imperialist threats to regional peace and stability.

The summit was called to establish strategies to address the economic impact and human damage caused by the COVID-19 pandemic. It also sought to deal with the challenges in the revitalization process of ALBA-TCP during 2021, a year marked by the hostility of the United States against several countries in the region. The summit reviewed and continued the various agreements signed in the past year, aimed at strengthening cooperation in strategic sectors such as health, agriculture and food, education, political and communicational organization.

This ALBA-TCP summit was held as a part of the commemoration of the 200th anniversary of the Battle of Carabobo, which led to the independence of Venezuela from Spain. On June 24, 1821, under the leadership of Liberator Símon Bolívar, an army of patriots defeated the Spanish empire. Following this victory, the Liberator’s army freed the people living in neighboring countries: Colombia, Panama and Ecuador. In this regard, the ALBA-TCP Secretary General Sacha Llorenti stressed that “commemorating Carabobo is recognizing our identity as free men and women. Ours is an Alliance for life and independence.”

Venezuelan President Nicolas Maduro, who inaugurated the summit and welcomed the delegates, also highlighted the successful culmination of the Bicentennial Congress of the Peoples of the World, which was also organized as a part of the historic commemoration. He reported that hundreds of representatives of various progressive organizations, social movements and trade unions from across the globe met in Caracas to take part in the international forum. The event aimed at uniting people’s struggles against imperialism and neoliberalism, and promoting the legacy of solidarity and internationalism of Venezuelan leader Simon Bolivar.

President Maduro also emphasized the importance of Cuba’s scientific developments for the region and the alliance. Pointing out the difficulties in accessing vaccines due to the commercial blockade and economic sanctions imposed by the US and the EU against the Venezuelan government, he reported that his country signed an agreement with Cuba for the supply of 12 million doses of the anti-COVID-19 vaccine candidate Abdala, which showed 92.28% efficacy and is among the highest in vaccines developed so far. He reminded that the ALBA-TCP has its own vaccine bank and Cuba has promised to contribute towards it. “This is what ALBA is for, cooperation, solidarity,” said Maduro.

Bolivian President Luis Arce also celebrated the achievements of the Caribbean country and the work of its doctors around the world to help other countries during the pandemic. “I express admiration for Cuba and its revolution,” said Arce.

Likewise, all the leaders present at the event applauded Cuba’s long history of medical innovation rooted in humanism, internationalism and solidarity.

Cuban Foreign Minister Bruno Rodrigue thanked the integration mechanism for its support in the fight against the embargo imposed by the US on Cuba for almost six decades and ratified the solidarity and cooperation of his country in the face of the pandemic.

The conference was joined in person by the Prime Minister of Dominica Roosevelt Skerrit, the Prime Minister of Saint Vincent and the Grenadines Ralph Gonsalves, the Foreign Minister of Antigua and Barbuda Everly Chet Greene, the Minister of Agriculture, Lands and Forests of Granada Peter David, and virtually by Nicaraguan President Daniel Ortega. It was also attended by Venezuelan foreign minister Jorge Arreaza, former Bolivian President Evo Morales, former Ecuadorian President Rafael Correa, the director of the Tricontinental Institute for Social Research Vijay Prashad, among other delegates.

The final statement of the meeting, the member countries stressed the need to strengthen the Community of Latin American and Caribbean States (CELAC) as a mechanism for political agreement between the 33 countries of the region, based on the principle of unity in diversity.

The bloc welcomed the re-establishment of constitutional order in Bolivia after the coup d’état and the opening of the national reconciliation process, based on justice, self-determination and democracy. It praised the efforts and initiatives of President Luis Arce, both domestically and internationally, to move forward towards the economic reactivation of the country and the efficient control of the COVID-19 pandemic.

The ALBA-TCP reiterated its recognition of the legitimate authorities of Venezuela and greeted the call to hold upcoming regional and municipal elections as an expression of the solid participatory and active democracy of the Venezuelan people.

The integration mechanism upheld their support for the Nicaraguan government, and condemned the repeated destabilizing attempts against the legitimate government by the United States, in order to interfere in the development of the upcoming elections.

The alliance applauded Cuba for the remarkable efforts of its health professionals to address the health crisis, especially the work done by the contingents of the Henry Reeve Medical Brigade, as well as for the development of five vaccine candidates. It reaffirmed the condemnation of the economic, commercial and financial blockade imposed by the US against Cuba, the intensification of such sanctions in the midst of the pandemic, as well as the inclusion of Cuba in the list of countries “that sponsor terrorism.”

The organization rejected the actions of the Secretary General of the Organization of American States (OAS), Luis Almagro, who has led the multilateral organization down a path of nonsense, by legitimizing violent actions, interfering in internal affairs and breaking the constitutional order in some countries of the region.

The ALBA-TCP recognized the leadership and work of the World Health Organization (WHO), as well as the efforts of the COVAX initiative, a global access fund for anti-COVID-19 vaccines. The countries called for urgent universal immunization against the coronavirus disease, ensuring a prompt, equitable, supportive, non-discriminatory and affordable distribution of vaccines, medical supplies and equipment. They hailed the creation of the ALBA-TCP vaccine bank and medicines bank, with the aim of guaranteeing vaccination and medical supplies, rapid tests and PCR tests, in all member nations.

The regional bloc emphasized on the need to focus on climate change and vowed to take more effective joint actions on the serious issue. It ratified its commitment to protecting the rights of Mother Earth and stopping capitalist onslaught on the environment, as agreed upon during the “Reunion with Mother Earth” international event in Bolivia.

The alliance celebrated its continuous solidarity in denouncing the unilateral coercive measures imposed by the US against Cuba, Nicaragua and Venezuela and demanding an end to the US sanctions, recently by supporting the resolution presented by Cuba in the General Assembly of the United Nations. It also celebrated the humanitarian assistance and help provided to the government and people of Saint Vincent and the Grenadines in the aftermath of the eruptions in the La Soufrière volcano.

The alliance reiterated its full support for the Caribbean countries in their claim for compensation for the genocide of the indigenous people and the crimes of slavery and transatlantic slave trade.

The member countries also agreed to promote the development of the ALBA-Petrocaribe Complementary Economic Zone as a model of productive and technological development based on the values of the ALBA-TCP.