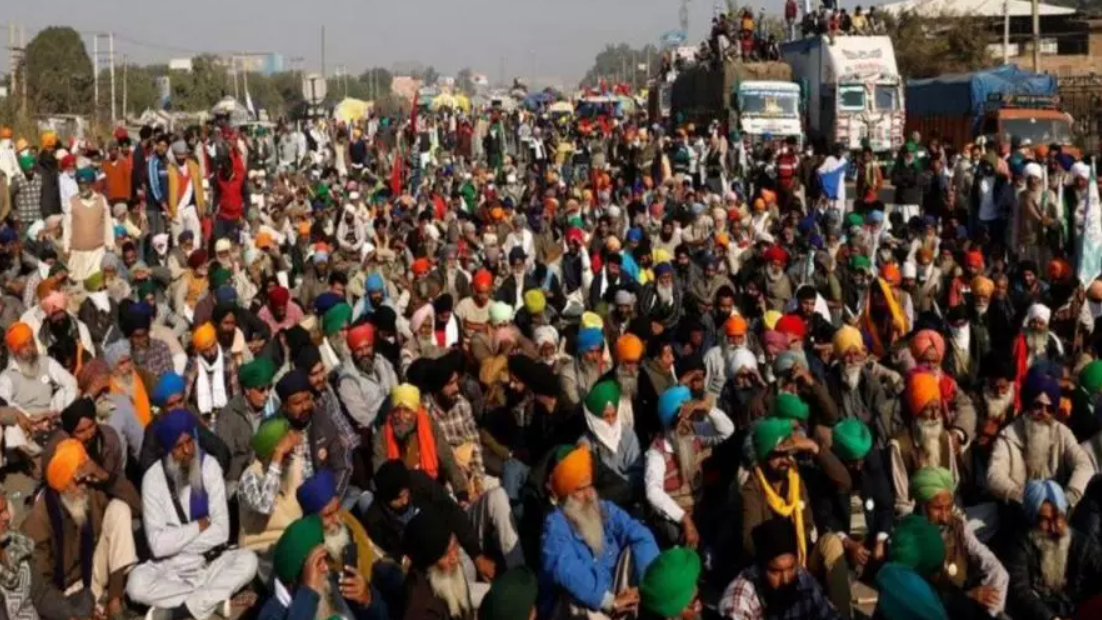 In a spectacular show of strength, farmers’ organizations on Saturday protested in front of the houses of governors [Raj Bhavans] and observed ‘Save Agriculture, Save Constitution Day’ in more than 20 States and union territories in India against the three controversial central Farm Laws, and for a legal guarantee of minimum support price (MSP). The leaders maintained that the protest enjoyed the support of all sections of society with people protesting at the district level as well. The farmers, who have been protesting at Delhi’s borders, maintain that the farm laws will compromise the food security of the country by bringing contract farming into effect. Similarly, a significant population of farmers maintain that they will lose their income security as one of the bills proposes the formation of private grain markets.

Ashok Dhawale, president of the All India Kisan Sabha, who was with the contingent of farmers from the State of Haryana, told Newsclick that the protest was observed with full fervor across the country. “The protest was successful in more than 20 States and union territories. In the north-east too, the farmers went to governors houses in [the States of] Tripura and Manipur. I think today’s protest too showed our strength; it said that farmers will not move back an inch after spending seven months at Delhi’s borders. It is the government which will have to come to the table for a dialogue.”

The farmers’ protest began on November 26 and since then, tens of thousands have been staging a sit-in on the outskirts of the capital, New Delhi.

Dhawale was joined by thousands of farmers from different organizations who began their march from Gurudwara Nada Sahib in Panchkula and were stopped at the border of Chandigarh (the capital of the States of Punjab and Haryana) where a representative from the governor’s house received their memorandum. A few kilometers away, about 40,000 farmers from Punjab began their protest from Gurudwara Amb Sahib in Mohali. They were later stopped by the police as they were about to enter Chandigarh.

In the memorandum addressed to the president, the farmers said: “What we witnessed in the past seven months and experienced first-hand reminds us of the Emergency 46 years ago. Today, it is not just the farmers’ movement that is facing repression, but the movements of workers, youth, students, women, those from minority communities, Dalits [the oppressed castes] as well as Adivasis [tribal communities]. As during the Emergency back then, many true patriots have been put into prisons. Draconian laws like UAPA [Unlawful Activities (Prevention) Act, an anti-terror law] are being misused against those who are resisting the authoritarian regime. Media is shrouded in fear and favoritism. Judiciary’s freedom is under attack. Human rights are being violated routinely. Without declaring an Emergency, democracy is being throttled every day.”

The farmers said they were turned down by every office they expected justice from, including the President. The memorandum went on to add that the three farm laws were “unconstitutional, because the Union Government has no authority to legislate in the domain of (agricultural) Markets. These legislation is also undemocratic. Before creating such laws, no consultations and dialogues were held with farmers. Without being asked for and without proper reason, these were brought in covertly in the form of ordinances. The Bills, after being tabled in the Parliament, were not sent to committees for further study and debates. While pushing these Bills in the Parliament, voting by division was not allowed in Rajya Sabha [the upper house of parliament]. We had hoped that as the first guardian of our Constitution created by Babasaheb [B.R. Ambedkar, the architect of the Indian constitution] and others, you would refuse to give your assent to such unconstitutional, undemocratic and anti-farmer laws. However, you did not refuse.”

In Delhi too, the farmers protested in front of the office of the Lieutenant Governor (LG) at Civil Lines, where they were briefly detained and taken to Wazirabad Police Training Center. Later however, a brief virtual meeting was arranged with the LG and the memorandum was handed over to his representative. Earlier in the day, the coordinator of Delhi For Farmers was kept confined in her home even though the Delhi Police informed DFF coordinator Poonam Kaushik last night that they will allow DFF to hold a dharna (protest) at Civil Lines Metro Station.

In the State of Uttarakhand’s Dehradun, Karnataka’s Bangalore, Telangana’s Hyderabad, Delhi and Madhya Pradesh’s Bhopal, police picked up protesting farmers from where they had assembled and they were not allowed to go to the governor’s residences. Protestors were detained at other places in Karnataka too. “What was the need to stop the protestors when the administration knew about the plans announced by the Samyukt Kisan Morcha [Joint Farmers’ Front] many days ago? It was only a matter of handing over a memorandum to the Governor; not allowing even this much is a reflection of the undeclared emergency and authoritarian times we are going through,” said Balbeer Singh Rajewal, a senior farmers’ leader from Punjab.

In the State of Tamil Nadu, places like Tiruchi and Erode saw large gatherings of protestors. It was similar in Karnataka. In Telangana and Andhra Pradesh too, protests were held in various places.