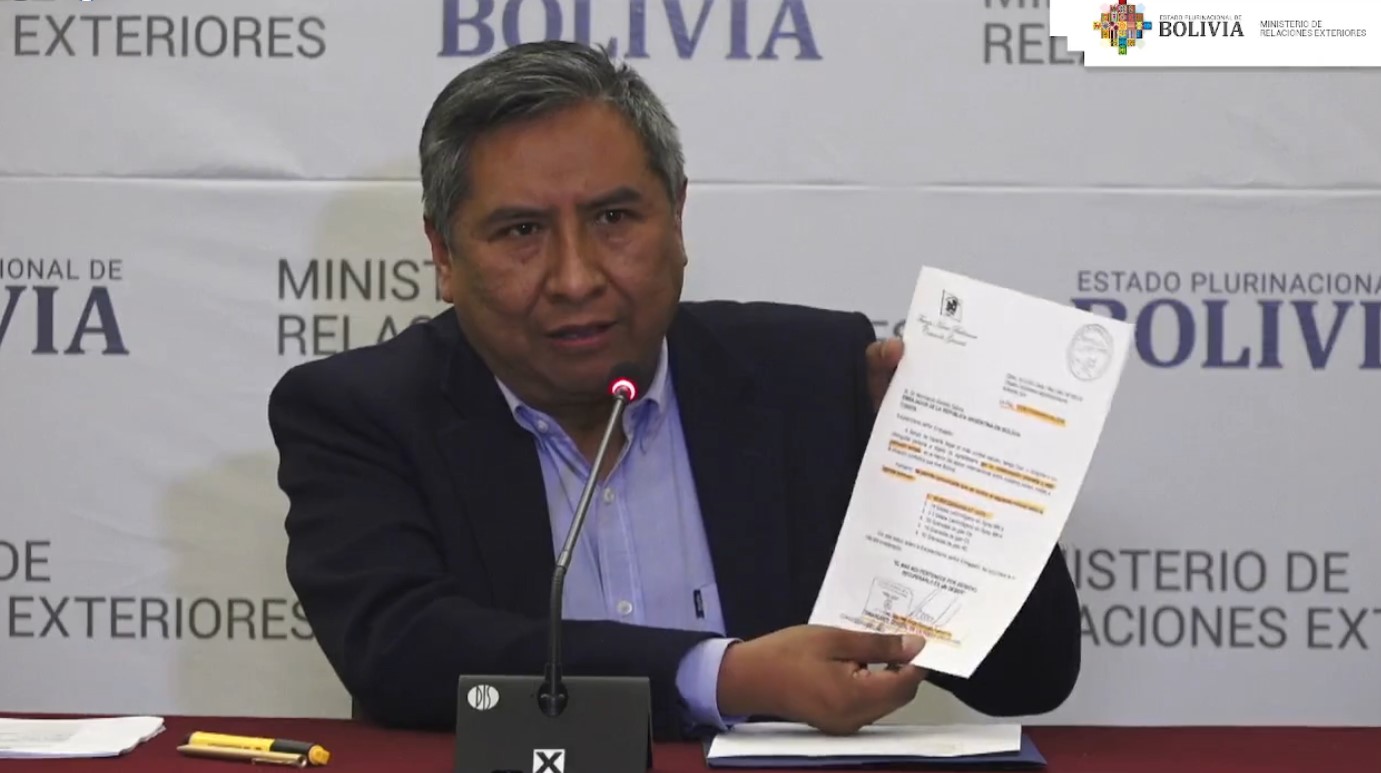 Bolivian foreign minister Rogelio Mayta, on July 8, denounced that the government of former Argentine President Mauricio Macri was involved in the coup d’état against former President Evo Morales in November 2019. In a press conference, Mayta shared an official letter that evidenced that Macri’s administration supplied war ammunition and non-lethal weapons to the coup regime of Jeanine Áñez, which were eventually used by the Bolivian security forces to suppress the anti-coup and pro-democracy mobilizations that broke out in the country following the coup.

In the letter, dated November 13, 2019, just three days after the coup, the former head of the Bolivian Air Force, Jorge Gonzalo Terceros, thanked the then Ambassador of Argentina, Normando Álvarez García, for the delivery of 40,000 12/70 AT cartridges and different types of tear gas sprays and gas grenades.

This is the letter from Bolivian Military General Jorge Gonzalo Terceros, thanking Macri's Ambassador for the lethal munitions delivered to the coup regime. pic.twitter.com/AGnraWzCM0

Mayta criticized that Macri’s government, like the former government of Ecuadorian President Lenín Moreno, provided the de-facto government with weapons to consolidate its power and break the constitutional order in the country. He also regretted the complicity of the Argentine government in the Sacaba and Senkata massacres, in which a total of 27 protesters were shot dead.

“Argentina, presided by Mauricio Macri, also gave lethal weapons to the Bolivian Armed Forces, who repressed social protests in November 2019. On November 13, they were thanked. On November 15, two days later, the massacre in Sacaba was carried out. A few days later, on November 19, the massacre in Senkata was carried out. We are outraged because a foreign government contributed to these serious violations of human and civil rights of the Bolivian people. We consider this situation dire and absolutely unacceptable since it was an attack against national sovereignty and dignity,” said Mayta.

“We will request more information from Argentina and Ecuador on a situation totally against the canons that govern diplomacy between two brotherly nations. What happened was an organized plan against Bolivian democracy, not merely accidental events,” added Mayta.

In a thread on twitter, Bolivian President Luis Arce also repudiated Macri’s support for the coup and stressed that “the sending of war materiel to repress the Bolivian people contravenes international norms.”

President Arce also recognized the support of his Argentine counterpart Alberto Fernández. “We ratify our ties of brotherhood with the Argentine people, and recognize the solidarity and support of brother President Alberto Fernández to the Bolivian people, as well as their commitment to memory, truth and justice,” tweeted Arce in response to a letter from President Fernández apologizing to the Bolivian people for what happened.

Former President Morales also condemned the participation of some right-wing governments of the region in the coup against him and demanded justice for the victims of violent repression and human right violations.

“This is further proof of the participation of some right-wing governments in South America in the bloody coup that led to massacres and looting in our country. It is the undeniable evidence of the latest edition of the Operation Condor with an exchange of information and systems of repression. The letter signed by a military man who dishonored his flag and attacked the constitutional order proves the participation of right-wing rulers, the Catholic Church, the United States and (Luis) Almagro (Secretary General of the Organization of American States (OAS) in the coup. Their crimes against humanity must be investigated and punished in international court,” tweeted Morales.

Case against Ola Bini has consequences for all of Latin America, says report